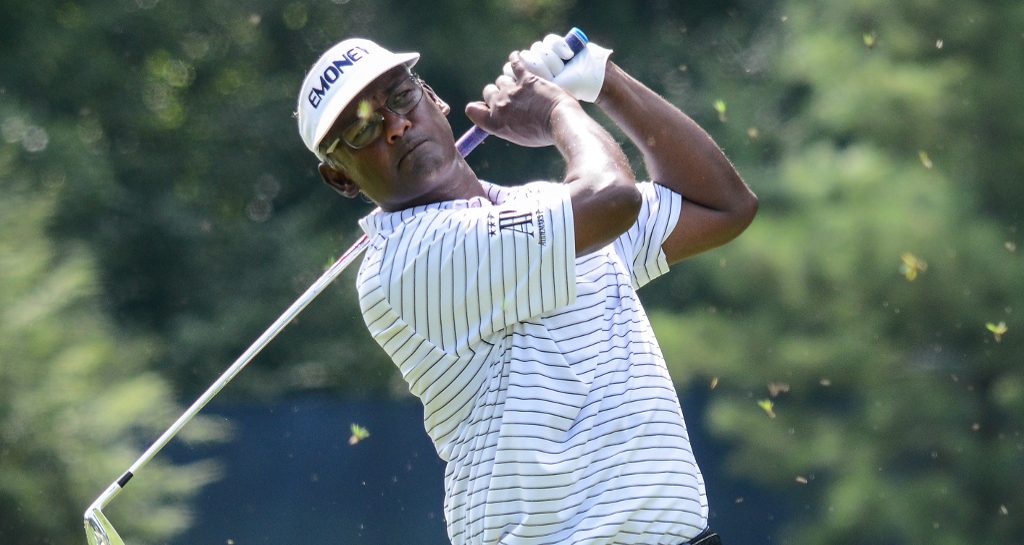 Vijay Singh could make PGA Tour history on Sunday if he wins the Honda Classic at the ripe old age of 56.

Singh’s last PGA Tour win came in 2008, but after firing an impressive six-birdie, one-bogey 65 at PGA National Resort & Spa’s Champion Course on Saturday, he finds himself just one shot adrift of the lead set by rookie Wyndham Clark ahead of the final round.

The round of the day goes to 56-year-old @VijaySinghGolf.

The contrast between the two frontrunners could hardly be more stark: Singh, a 56-year-old veteran with more than 60 worldwide wins to his name – 34 on the PGA Tour alone – and Clark, a 25-year-old rookie still searching for his first professional win.

.@VijaySinghGolf's first win on TOUR was in June 1993.

They'll tee it up in the final pairing Sunday.#LiveUnderPar pic.twitter.com/pZk2Q3zUcm

Clark shot a second successive 67 on Saturday to get to seven under par for the tournament, one stroke clear of Singh, South Korea’s Kyoung-Hoon Lee and American Keith Mitchell.

Like Clark, Lee and Mitchell both put themselves in contention for a maiden PGA Tour win after rounds of 68 and 70 respectively.

But while a win would certainly be momentous for Clark, Lee or Mitchell, it would be even more impressive for Singh, who would become the oldest winner in PGA Tour history by nearly four years should he triumph on Sunday – beating the previous record set by 52-year-old Sam Snead when he won the 1965 Greater Greensboro Open.

“I’m physically quite capable of doing it,” Singh said. “Mentally, I’m going to go out there and see how my mind works. If I just don’t let anything interfere, I think I can do it.”

While Singh’s last PGA Tour win came at the 2008 Deutsche Bank Championship, he does have four far more recent wins on the Champions Tour, suggesting he still knows how to close the deal when he’s in sight of the finish line.

“Playing the Champions Tour, you’ve got to make a lot of birdies,” he said. “It’s all about making a lot of putts, a lot of birdies there. That brings, I guess, aggression out of you, and you go out there and you know you have to make birdies.

Singh doesn’t just have three rookies to deal with on Sunday, however – Phoenix Open champion Rickie Fowler lies just two strokes back on five under after rocketing into contention with a 66.

Fowler will no doubt be looking at the names ahead of him on the leaderboard and will be backing himself to outscore them all.

Two shots back and @RickieFowler knows what it takes to win on Sunday @TheHondaClassic.

Highlights from his third round. 👇 pic.twitter.com/H0vz5yyaP1

And World No 4 Brooks Koepka also remains a factor. He shot a 70 on Saturday to join a large group on four under par, three shots off the lead.

Even Sergio Garcia could still have a say in the final outcome. He also carded a 70 to lie on three under – four back.

Still, all eyes will be on Singh come Sunday’s final round to see if he can pull off the improbable.

“I don’t know what I found, but I’m going to see if it’s still there tomorrow,” he added.