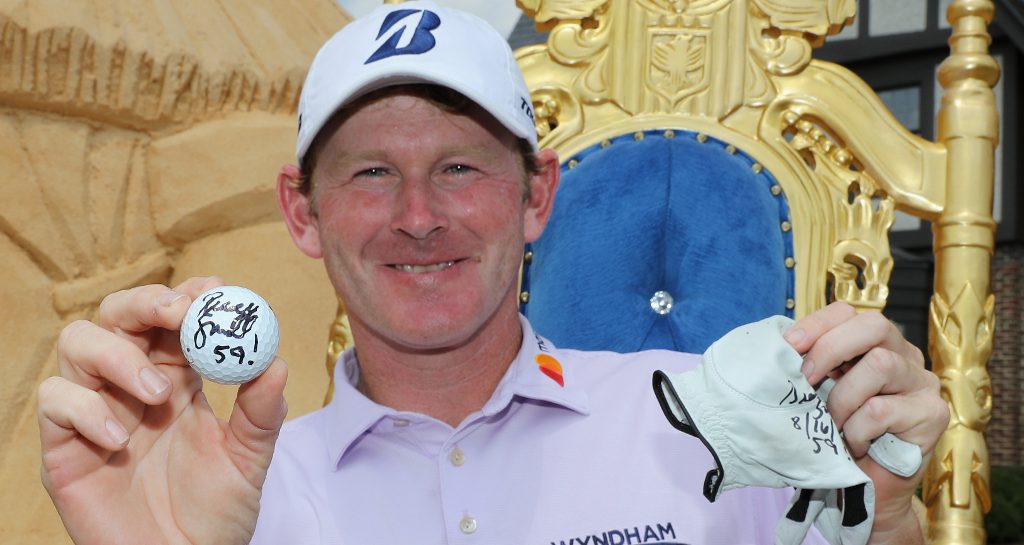 Brandt Snedeker played the round of his life at the Wyndham Championship in Greensboro, North Carolina, on Thursday, carding an 11-under 59 to take a four-shot lead over Ryan Moore and John Oda.

It was only the 10th sub-60 round in PGA Tour history and was all the more impressive because Snedeker was still one over through three holes before he went on a run of four consecutive birdies. Two more pars at 17 and 18 gave him a front-nine 32.

Even after Snedeker birdied four of his first five holes on his back nine he was still only at seven under with four holes to go. He needed to play that closing stretch in four under, and he took a big chunk out of that, and the cup, at the par-4 sixth, flying a 7-iron directly in the hole for eagle to get to nine under. At the par-3 seventh he put his tee shot to within three feet, cleaning up another birdie and needing just one more on the final two holes for 59.

Not your typical Thursday reaction.

Magic can happen any time you tee it up.#LiveUnderPar pic.twitter.com/WdapKYOiXt

“Really cool feeling to be standing on eight tee and tell myself if I hit two fairways I’m going to shoot 59,” Snedeker said.

Hitting the fairway at the eighth, he hit his approach to six feet but then missed, forcing himself to have to make birdie at his final hole. Facing a 20-footer on the ninth green, Snedeker rolled it in.

“To know what you’re trying to do, step up there and have a 20-footer and know what it means, I was very aware of what was going on,” he said. “To knock that in was very special. To know that I’m part of a small club on tour, not many people have done this, really cool feeling right now.”

Today was a good day for @BrandtSnedeker.

✅ 10th round of 59 or better
✅ Lowest round this season
✅ Only player to shoot 59 after an opening bogey
✅ Leader by 4
✅ Only player with two 9-hole 27s
✅ Sedgefield course record
✅ 3rd sub-60 round with a bogey#LiveUnderPar pic.twitter.com/iXsAiu1JMB

Snedeker is only the ninth player in PGA history to shoot a sub-60 round, with Jim Furyk the only one to have done it twice.

Moore and Oda, the latter playing in just his 10th PGA Tour event, are still within striking distance though following their opening-round 63s.