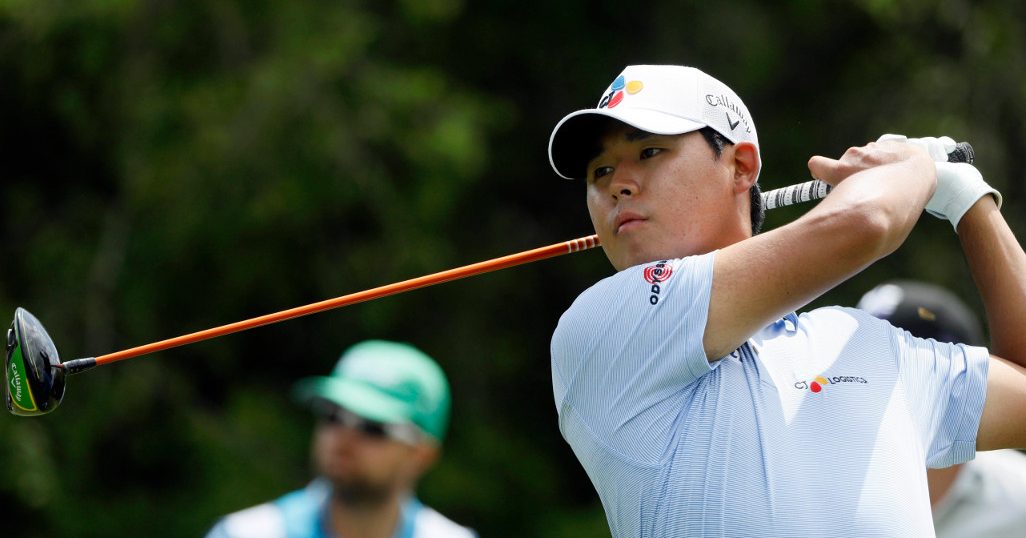 So Woo Kim will take a one stroke lead into the final round of the Valero Texas Open on Sunday.

The South Korean lead for the third straight round when he carded a three under 69 around a wet and windy TPC San Antonio on Saturday, enough to take him to 15 under for the event and one shot ahead of Corey Conners.

Kim has been solid all week in Texas but he started his round with his third bogey of the tournament. The 2017 Players champion made up for the setback on the next hole, rolling in a birdie on the par five second.

Another two gains saw him get to two under for the round, then Kim stepped up to the par three 16th, which he aced on Friday. Another crisp iron was dead on line but the ball bobbled over the hole. Ironically, Kim missed the four foot return putt to par the hole. A final birdie on the last was enough for the outright lead.

His only other 54-hole lead on TOUR was at the 2016 @WyndhamChamp, which he went on to win. 🏆#LiveUnderPar pic.twitter.com/ovIJTBGVu0

“It’s a tough day…first six holes, like rain and windy,” the world number 61 told the press.

“Back nine weather is better and a little bit of pressure. Yeah, still feels great and looking forward to tomorrow.”

Sitting one shot back on 14 under is Conners, who signed for a sizzling six under 66 that included a five under front nine.

“I just tried to block it [the rain] out really and just focus, take a deep breath and just be really committed to the shot and not worry about what was falling from the sky because it was raining pretty good on a few of those approach shots,” said the Canadian, was was the last man to qualify for the this week’s tournament.

The last player to Monday Qualify and win on TOUR was @ArjunAtwal (2010, @WyndhamChamp).@CoreConn Monday Qualified @ValeroTxOpen and is one shot back entering the final round.#LiveUnderPar pic.twitter.com/NmW0qECCBN

Further down the leaderboard, 2016 winner of the of Texas Open Charley Hoffman is alone in third on 13 under after a round-of-the-day 64. The American played the last three holes in four under thanks to an eagle on the 18th.

The ever-popular Jordan Spieth and Rickie Fowler fell out of contention after carding one over 73s on Saturday.