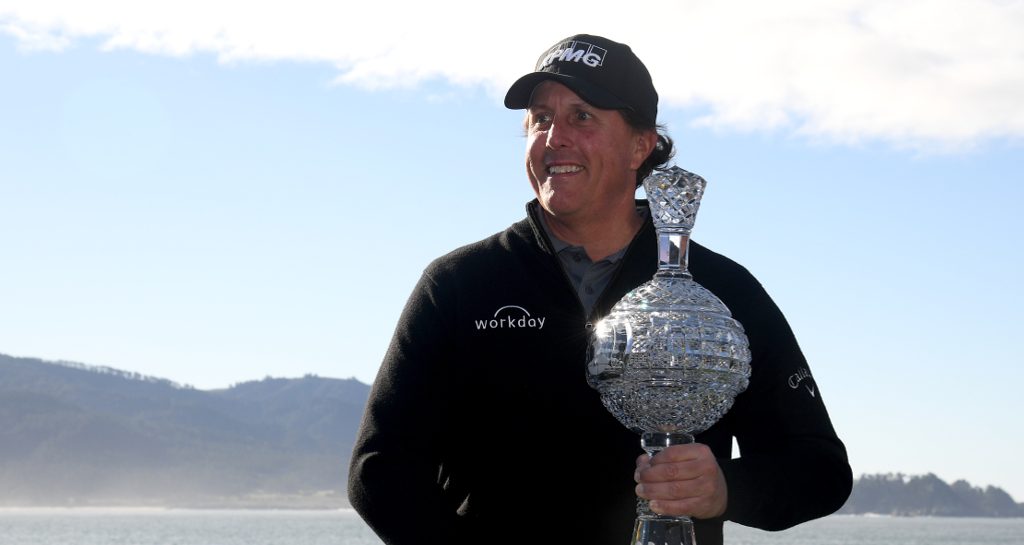 Pebble Beach Pro-Am champion Phil Mickelson revealed that he thanked Paul Casey for deciding to haul them off the course due to fading light on Sunday.

The 48-year-old was not happy with Casey’s decision on Sunday evening, and was insistent there was still enough light for them to finish their rounds, leading to a brief stand-off between the two on the 16th green.

But after returning to Pebble Beach Golf Links on Monday morning to wrap up a three-shot victory with a minimum of fuss, Mickelson had clearly calmed down and seen the sense in Casey’s actions, admitting that he’d maybe treated the Englishman a little unfairly the night before.

“I thanked Paul this morning for having us finish this morning because I get sometimes in my own little bubble that I don’t see the big picture and he really protected both of us as the greens last night were beat-up so to come out today on fresh greens, better weather and be able to see a lot better made me better appreciative of that,” he said.

🎥 His best darts from Pebble: pic.twitter.com/k6tC3BAmne

Mickelson also downplayed suggestions that his record-equalling fifth Pebble Beach victory meant he was now one of the favourites for this year’s US Open at the same venue.

‘Lefty’ currently only needs the US Open to complete the career Grand Slam by winning all four majors, and he could hardly have asked for a better venue than Pebble Beach to try and achieve the feat.

But he was quick to point out that the conditions at Pebble Beach in June will be completely different to what they were in February.

Asked in a greenside interview what the performance did for his US Open chances, he said: “Absolutely nothing, because it’s nothing like the course we’ll see.

“I’m hitting drivers and trying to bomb it down there and hit wedges in (this week).

“The rough will be so different and the greens so firm it will be a whole different golf course but I’ll deal with that in six months.”

Of course, it’s not just Mickelson’s US Open chances that have been given a boost. His odds for the upcoming Masters in April have dropped from 40/1 to 25/1 at the Westgate Las Vegas SuperBook – hardly surprising considering he already owns three green jackets.