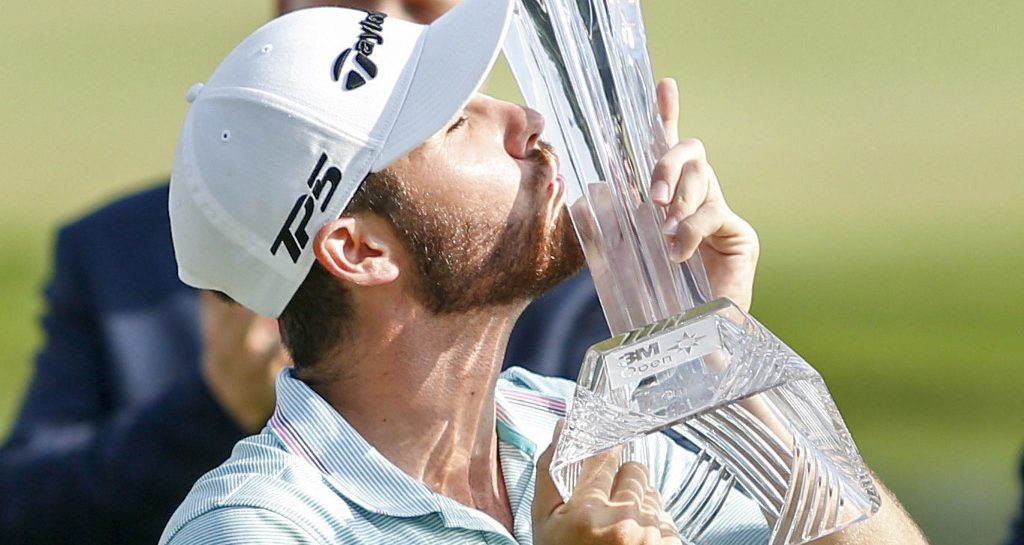 Twenty-year-old Matthew Wolff won the 3M Open on Sunday with an eagle on the final hole in just his third start as a professional.

Wolff teed off on the 72nd hole at TPC Twin Cities on Sunday trailing Bryson DeChambeau and Collin Morikawa by a single stroke.

Two lusty blows left him on the edge of the green on the par-5, and an impressive putt saw him hole out from 26 feet for an eagle and a closing 65 to snatch a one-shot victory.

The win earns him an invite to next year’s Masters, and he’ll be eligible for the FedEx Cup playoffs. He’s also fully exempt on the PGA Tour for the next two seasons.

Wolff enjoyed a spectacular amateur career at Oklahoma State, leading the Cowboys to a national championship and winning the first three tournaments of his sophomore year before going on to capture the NCAA individual title, but few could have predicted he would enjoy success this quickly on the PGA Tour.

Wolff also sports a pretty unusual swing, featuring a signature wiggle and a left leg kick that he picked up from playing baseball.

"There are some moves that don't look conventional, but down through the ball it's as good as anybody in the world."@Matthew_Wolff5's coach @GeorgeGankas breaks down the one-of-a-kind swing of the @3MOpen champion. pic.twitter.com/e7FFkj1Zxk

“Unbelievable to make that and win his first PGA Tour title,” said DeCheambeau, who came up just short despite a final-round 66 and a closing eagle of his own.

“Hats off to him. He’s a great player and, obviously, a stud, so he belongs out here.”

As for Morikawa, he made an incredible run on the back nine, draining no less than six birdies in his last eight holes, but it wasn’t enough to stop Wolff.

Wolff agonised somewhat over the decision to turn professional in June, and toyed with the idea of staying an amateur for a little while longer and competing in the Walker Cup in September, but his decision to take the plunge has paid off handsomely.

“I believed I was ready, my game was ready, but that’s a big step going from amateur golf to playing for a living at such a young age,” he said. “There were a lot of things in my mind, but I figured winning a national championship, there’s no better time to go.”