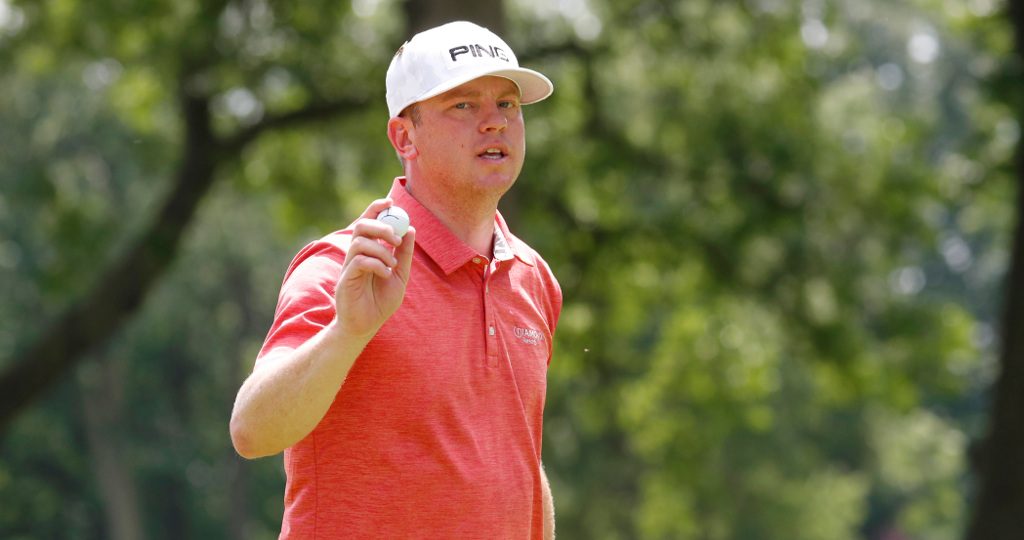 Nate Lashley’s love affair with the Rocket Mortgage Classic continued on Saturday, as he pushed out his lead to six strokes.

The American has been sublime all week around Detroit Golf Club.

Langley was only included in the field as the last alternate after failing to qualify on Monday. But it’s been a different story since the tournament proper.

On Saturday, Langley carded a second nine under 63 to take his lead out to six shots over JT Poston who’s on 17 under, followed by Cameron Tringale on 16 under and former Masters winner Patrick Reed is a further stroke back.

Lashley – who has carded just one bogey in the tournament – was going along nicely, sitting at three under after six holes when teed off at the par five seventh. Unfortunately, an errant drive saw him land on the wrong fairway. Lashley took a chance and a huge iron cleared the trees to leave himself just 40 yards from the pin. He chipped it to four feet and tapped in for a birdie.

The world number 352 then drained five more birdie putts coming home to match his opening round 63.

“I’ve never experienced anything like this,” Lashley told ESPN.

“You don’t ever expect to shoot nine under on the PGA Tour, and I’ve done it twice in three days.”

Wire-to-wire.@NateLashley is one round away from doing just that.

The last man in the field separated himself from everyone on moving day.

To say that a maiden PGA Tour win would mean the world to Lashley is a bit of an understatement. The Nebraska native’s his girlfriend and parents died tragically in a plane crash when returning home from watching him play in 2004. He spent time away from the game as a result, trying his hand at selling real estate.

“When I was flipping houses, I thought I was pretty much done with golf,” recollects Lashley.

“I always felt like I had the talent and ability to play out here. It was just a matter of getting out here and getting comfortable.”

Thankfully, Lashley returned to the game and a Web.com tour win would help him earn his PGA Tour card for 2018. A knee injury ended his season prematurely and while he started 20189 on a minor medical extension, he did not meet the term and has had to fight through qualification rounds to play at the business end of tournaments.