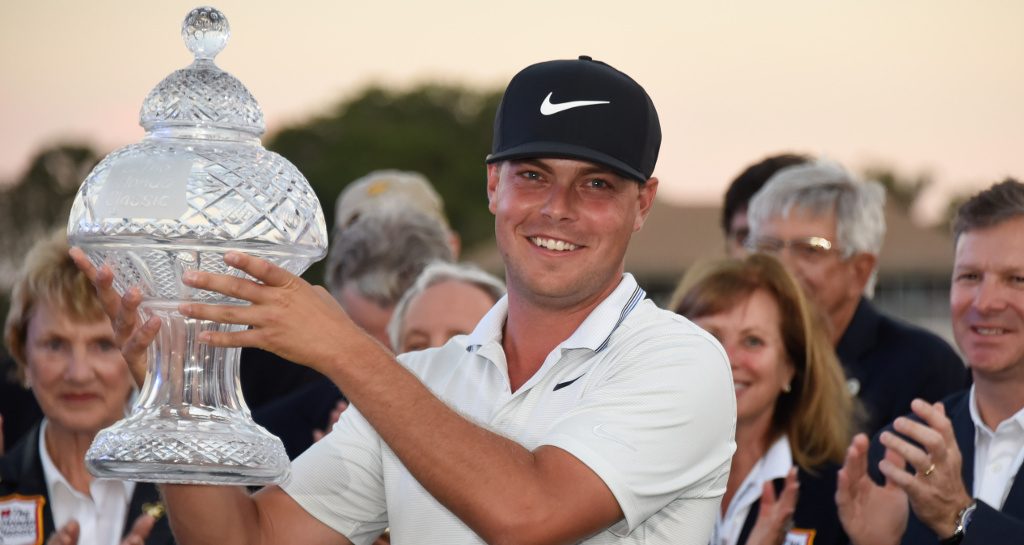 Keith Mitchell made a birdie on the final hole to complete a one-stroke victory over big-name rivals Brooks Koepka and Rickie Fowler at the Honda Classic.

While all eyes were on Vijay Singh to see if he could pull off an improbable PGA Tour win at the ripe old age of 56, most expected Fowler and Koepka to make life difficult for the Fijian.

As it turned out, it was newcomer Mitchell who walked away with the trophy thanks to a final-round three-under-par 67 and a nine-under-par total of 271.

What a way to get your first PGA TOUR win. #LiveUnderPar pic.twitter.com/ABt6sKOs4n

Koepka and Fowler shot rounds of 66 and 67 respectively to finish one stroke back in a tie for second.

Ryan Palmer and Lucas Glover were tied for fourth a further shot back, while Singh ultimately had to settle for sixth place after his final-round 70.

Ultimately, no one handled the closing stretch better than Mitchell, who birdied the par-3 15th and then made another 15-foot birdie at the last to close out the one-shot victory.

Afterwards, Mitchell said he was motivated by a couple of stories written about him after he held the 36-hole lead on Friday. One article referred to him and co-leader Sungjae Im as “no-names” while another predicted that neither one would be in contention on Sunday.

“I don’t expect to have any great stuff to be written about me because I’ve only been out here for a year,” Mitchell said. “So I’m not saying that in a negative light. I just used that as a little kind of emotion that everyone gets their start somewhere, everyone gets their first win somewhere, and I wanted this to be mine.”

Fowler, who was hanging around the 18th green to see if Mitchell would make birdie or set up a play-off, was one of the first to congratulate the newcomer.

“I knew what Keith was going through on the last, having been there,” said Fowler, who won The Honda Classic two years ago. “It’s not easy winning out here, especially your first. So seeing him make that putt, it’s cool.

“I know the feeling. All you can do is sit back, smile, congratulate him.”