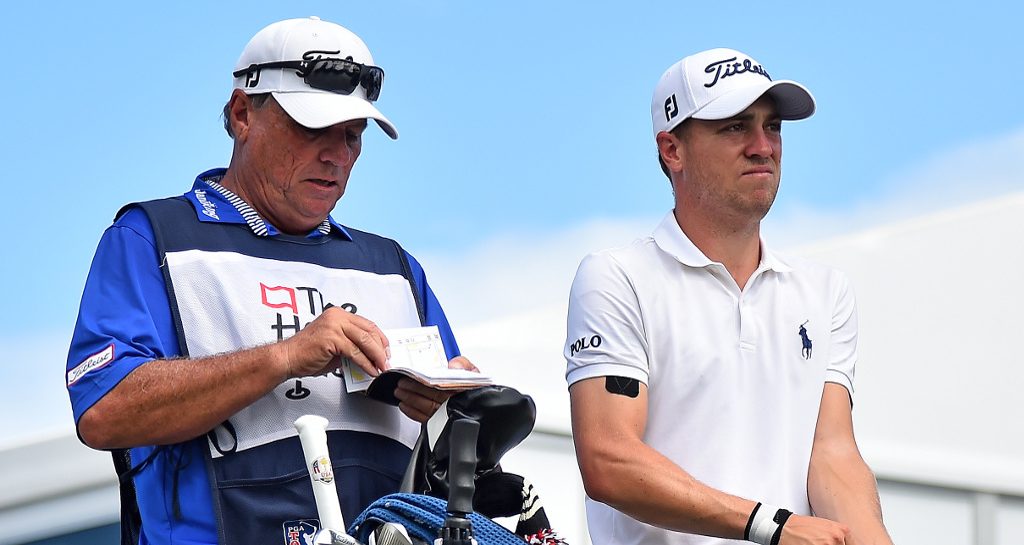 Justin Thomas did not appreciate the response he got from the USGA’s PR Twitter account after he criticised the level of communication regarding new rules changes.

After Thomas posted a series of tweets bemoaning the lack of clear communication from the USGA, the organisation’s PR twitter account called him out for cancelling “every meeting” they had planned with him.

Justin, we need to talk. You’ve cancelled every meeting we’ve planned with you, but we are reaching out again. We were at the first 5 events, and tournaments last year, and your tour has had a seat at the table for 7 years. We’d love nothing more than to give you a seat. Call us.

“Justin, we need to talk,” the USGA replied. “You’ve cancelled every meeting we’ve planned with you, but we are reaching out again. We were at the first 5 events, and tournaments last year, and your tour has had a seat at the table for 7 years. We’d love nothing more than to give you a seat. Call us.”

Afterwards, Thomas admitted the response had rubbed him up the wrong way.

“It was a little upsetting, just because it was inaccurate,” he said. “I haven’t cancelled anything, especially any meetings, but it is what it is, and all I want is the best for the game of golf and the best for the sport, and that’s what we’re going to continue to try to communicate with each other, to get that.”

John Bodenhamer, the USGA’s senior managing director of championships, then told Golf Channel’s Morning Drive that he had exchanged messages with Thomas after the initial exchange, and that they would now be setting up a meeting to discuss Thomas’ concerns.

“Look, it’s clear, I’m sure to everyone, that direct communication is the best way to go,” Bodenhamer said. “That’s where we’re going to go with this.

“We are going to talk with Justin, and we are happy we will have an opportunity to have a conversation in a few days, hopefully. Look, we will do whatever it takes in cooperation with the Tour.”

Thomas has been growing increasingly disgruntled as a result of the new changes.

At the Honda Classic on Wednesday, he offered the following broadside: “There’s no reason for me to sit up here and tell you guys that I think the Rules of Golf, the changes, are great, because I don’t. I think they’re terrible.”

On Thursday, he bent the shaft of his 9-iron during his first round, but was unable to replace it under the new rules and had to play his final 10 holes without it.

“You can just add that one to the list of rules that don’t make any sense,” he said afterwards.

Then, when it was announced on Saturday that PGA Tour player Adam Schenk had been retroactively assessed a two-shot penalty for a caddie-alignment violation, Thomas started the tweet storm that eventually got the USGA’s attention and led to their testy social media exchange.

My problem with the rule is that unless a caddie is clearly lining a player up (which is very obvious), I don’t see how there’s any benefit to it. Doesn’t make the game any better in my eyes. That being said, we know the rule and have to be careful to go by it

Exactly. A lot of times caddies just stand back there and talk. Whether it’s the yardage we have, etc. or maybe I ask him to assess my lie and that’s the most sensible place to look at it, from behind. I agree lining somebody up.. but if the caddie clearly isn’t, unnecessary

Really? Because last I checked in PHX my pointing out what happened to Denny went viral… and the rule was changed. Pretty sad the world we live in nowadays is all based off social media. But that’s how a lot of things get done. I (and others) are doing as much as we can to help

Totally agree… I more so say things in hopes that the USGA starts communicating with the current players to better the game and the sport. The rules are rules, no getting past that. Just hoping going forward, communication is had and ALL GOLFERS benefit from any changes 👌🏽 https://t.co/86TE7L8AnR

Thomas insists he never cancelled any meetings with the USGA and said he resented the implication.

“It is unfortunate,” he added. “It really hurt me. It was upsetting to me because the information they put out there was inaccurate in terms of me cancelling meetings, and that doesn’t make me look good, and that’s just when I got a little upset.

“We had talked, some communication with them, because I know those guys. I’ve talked to them about the rules this year. We’ve all tried to communicate and tried to get better relationships with them. It’s just, it is what it is, and all we’re looking is to better the sport and better the game.”