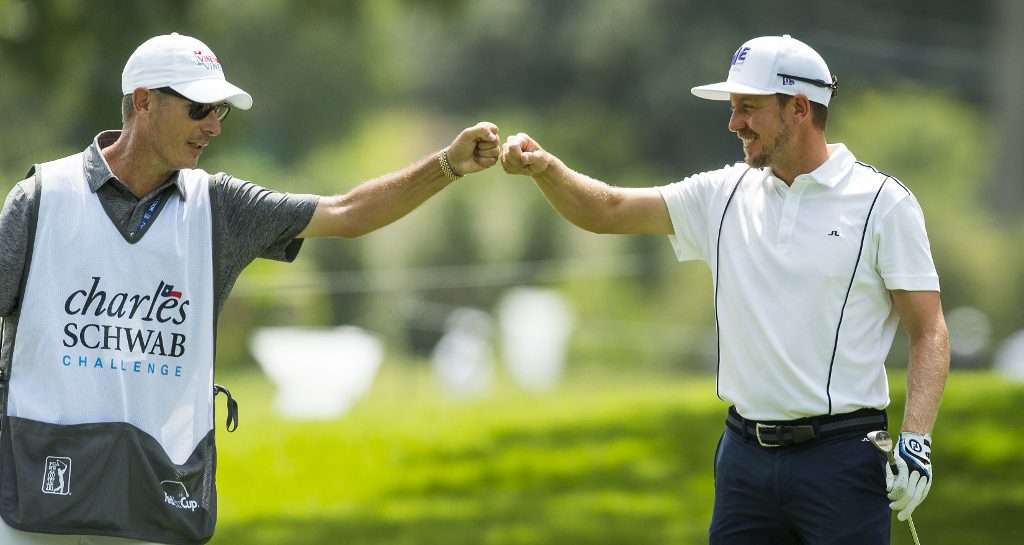 Jonas Blixt eagled the par-4 17th after holing out from the fairway to take a one-shot lead into the weekend at the Charles Schwab Challenge in Fort Worth, Texas.

The Swede had already made four birdies in a bogey-free round by the time he reached the 17th hole, but saved the best for last as his second shot from 132 yards in the fairway bounced a few feet from the pin and rolled into the hole for an eagle-two.

That shot helped Blixt to a six-under-par 64 and a one-shot lead over first-round leader Tony Finau and Kevin Na heading into the weekend at Colonial Country Club.

Despite his impressive effort on Friday, however, Blixt knows the hard work is just beginning.

“The test is going to be this weekend, if I can have a good weekend or not,” he said.

Finau, meanwhile, followed up his first-round 64 with a 68, while Na had the best round of the day, a stellar eight-under-par 62 to rocket up the leaderboard into a share of second place.

“I like this golf course,” said Na, who had an eagle and six birdies. “One of those golf courses I look forward to coming to. Fits my game. You’ve got to take advantage of those weeks because there is not too many golf courses like this on tour anymore.”

South African Rory Sabbatini, who now plays under the Slovakian flag, follows a further two strokes back in fourth place after a 66.

Spieth stared the day one back but dropped four shots back after following up his opening 65 with a more sedate 70.

“They were kind of misreads,” he said. “They weren’t bad strokes, that’s the difference.”

There were some surprises further down the field, with World No 8 Bryson DeChambeau, No 9 Xander Schauffele, No 10 Rickie Fowler and No 11 Jon Rahm all missing the cut.