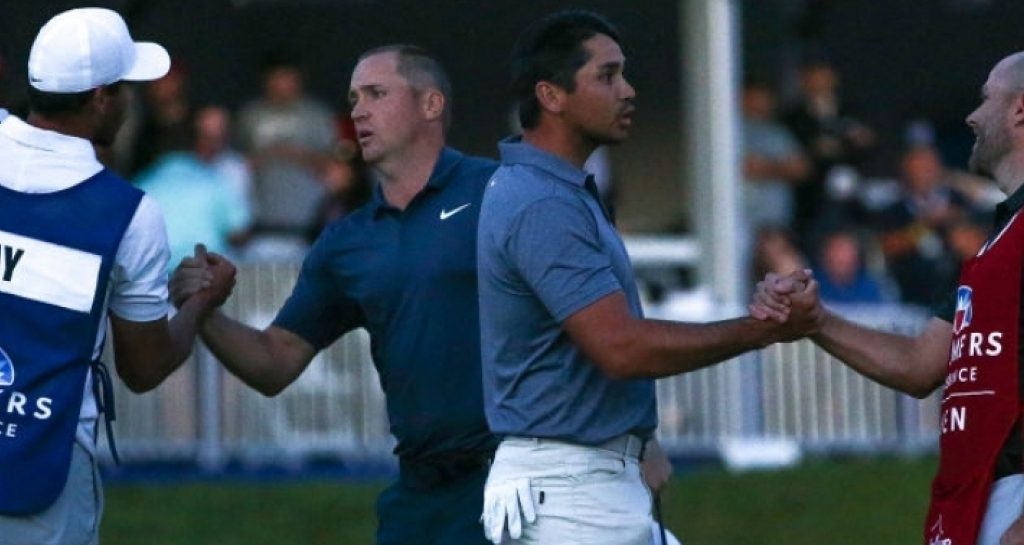 Jason Day and Alex Noren will return to Torrey Pines on Monday after darkness caused organisers to suspend their sudden-death play-off at the Farmers Insurance Open.

The pair were inseparable after five extra holes of a dramatic shootout as they both birdied the 18th hole – the fourth time they had played the par-five on Sunday – just before play was stopped.

“Alex was playing some tremendous golf, to be able to go shot for shot with him (in the play-off) was pretty special,” Day said afterwards.

“I’m just going to try and get some rest tonight. I’ll play all day tomorrow if I need to to get the win.”

Day, Noren and Ryan Palmer all finished the day level on 10 under par and began the playoff, the American eliminated at the first extra hole after making par.

The remaining duo then went shot for shot over the next four holes as they birdied the 18th again, traded pars at the 16th and 17th, and birdied the final hole once again before the fading light had the final say.

Back in regulation play, Day claimed the clubhouse lead thanks to a two-under par round of 70, that saw him hit four birdies on the front nine before bogeying the 11th and 15th coming home.

Noren also dropped shots at the 12th and 14th, but missed the chance to win outright when he slid a 15-footer past the hole on the final green.

Two bogeys on the back nine also saw Palmer drop out of contention before a superb birdie at the last hole saw him sneak into the play-off.

JB Holmes, fresh from his 65 on Saturday, was in contention thanks to three early birdies before handing back his gains with three consecutive bogeys from the 14th.

A birdie at the last saw him finish just short at nine-under par.

Tiger Woods also finished way down the pecking order on his return to the tour.

“After not playing for a couple years and coming out here on the Tour, playing, you know, a solid four days, I fought hard for these scores,” Woods said.

Woods will play next in three weekends time at the Genesis Open at Riviera.