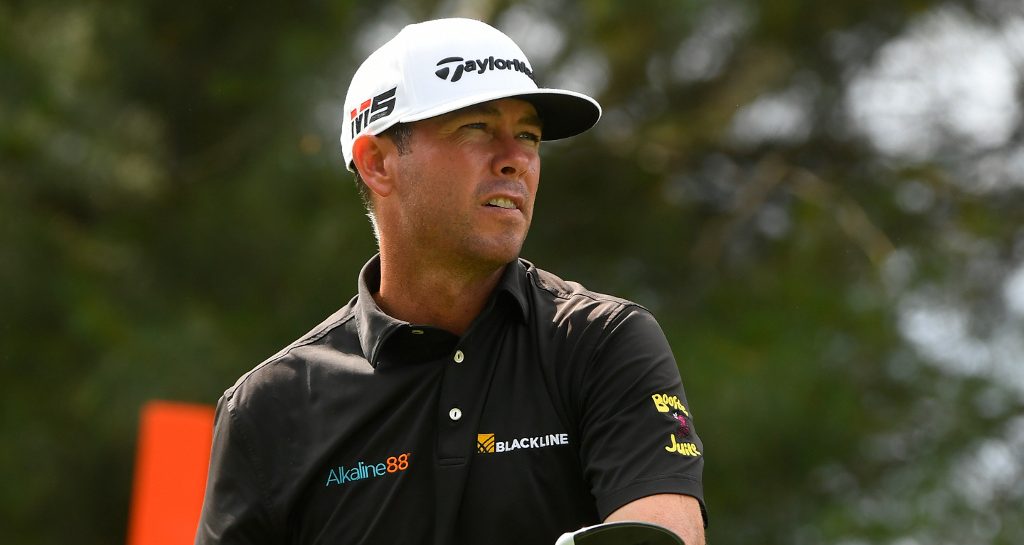 Fresh from his best performance in a major, American Chez Reavie looks well on course for victory at the Travelers Championship.

The 37-year-old started Saturday’s third round two shots off the pace, but ended it with a whopping six-shot lead after blowing away his rivals with a seven-under-par 63.

A bogey-birdie, level-par front nine gave no indication of what was to come, as Reavie fired seven birdies on the back for an inward 28 and 16-under-par total.

That left him a full six strokes clear of nearest challengers Keegan Bradley and Zack Sucher, who led by as many as five at one point before his lead evaporated in the face of Reavie’s heroics and his own capitulation.

Reavie first joined the PGA Tour in 2008 and won his first and, to date, only PGA Tour title at the Canadian Open that same year.

But by 2012 he was fighting to regain his tour status, and wrist surgery prevented him from playing at all during the 2013-14 season.

After returning to the Nationwide Tour, he regained his PGA Tour card for the 2015-16 season, coming close to winning the Phoenix Open in 2018 before losing out in a playoff.

At last week’s US Open, he recorded his best finish in a major by far – tied-third – and now he stands on the brink of his first PGA Tour victory in 11 years after a remarkable finish to his third round.

“It was crazy,” Reavie said. “Zack came out he was making birdies early. I was just trying to hang in there.

“It was playing really tough and I was just trying to hit as many greens as I could and give myself some looks.”

Chez Reavie, who enters Sunday with a 6-shot lead @TravelersChamp, is looking for his second win on TOUR. pic.twitter.com/cxmYoL0dDk

Of his back nine performance, which started with four straight birdies following a 24-foot birdie putt at the 10th, and included further gains at the 15th, 17th and 18th, Reavie said: “I think we got the wind really dialed in on the back nine.

I was able to just kind of roll with it. Using the good energy, making a few putts, having the people cheering you on – it’s a lot of fun.”

Reavie also spared a thought for Sucher, who looked to be cruising with a five-shot lead after four front-nine birdies only to disintegrate on the back nine with a run of a bogey and two straight doubles.

Combined with Reavie’s charge, it led to a pretty dramatic swing.

Golf is a funny game. pic.twitter.com/A5WyCJnih4

“Zack, I feel bad for him,” Reavie said. “He had some tough breaks, didn’t really hit that bad of shots.”

Zucher eventually recovered to post a 71, and still lies in second place alongside Keegan Bradley, who had a 69, but at six shots adrift it will take something special to stop Reavie from returning to the winner’s circle on Sunday.

Former World No 1 Jason Day (68) lies a further shot back alongside Mexico’s Roberto Diaz (67), while Bryson DeChambeau (64) and Tommy Fleetwood (67) are among those a further stroke behind.

World No 1 Brooks Koepka posted a disappointing 72, meanwhile, to finish down in tied-67th place.

Afterwards, the PGA champion and US Open runner-up he admitted he was feeling “fried” and needed a rest, and that the breakneck pace of this year’s major schedule had caught up to him.

“My body is starting to ache too,” he said. “If you’re in contention you’re going to be drained.”