Rory, Phil and Jordan blown away at US Open 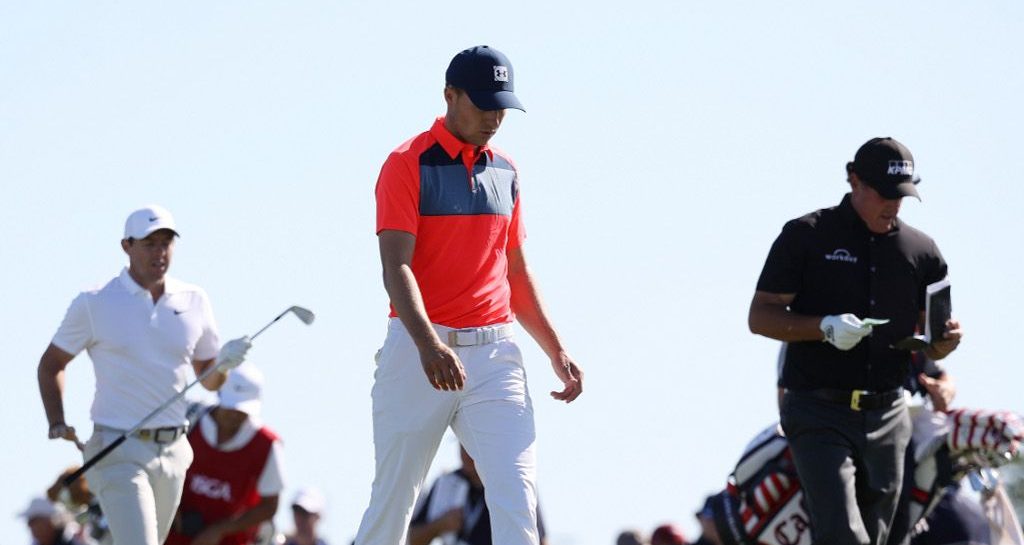 Rory McIlroy, Jordan Spieth and Phil Mickelson were among the players posting big numbers on a brutal opening day at the US Open.

The big name trio teed off together at Shinnecock Hills on Thursday morning, but with stiff winds, slick greens and brutal rough lying in wait, they soon found themselves in all sorts of trouble.

It takes a small army to find a ball in the Shinnecock fescue… pic.twitter.com/clUc2fvSOE

It took Spieth just 30 minutes to find himself four over par. He three-putted his first hole, the 10th, and followed that up with a triple bogey on the 11th when his bunker shot went over the green and his follow-up chip came back to his feet.

When you see the bus about to pull off and you know you can make it before it drives off…then it does…so you act all like you were never after it #USOpengolfgolf #ejected #spieth pic.twitter.com/UGYlnvp6o9

Spieth made the turn in 39, and then immediately added two more bogeys at the first and second. A rare birdie at the fifth did little to halt the carnage, with a bogey at the sixth and a double at the seventh resulting in an opening eight-over-par 78.

McIlroy would add five more bogeys, another double and three birdies to sign for a horror 10-over-par 80.

And while Mickelson fared the best out of the three players, a seven-over 77 has hardly put him in good shape in his quest for the US Open title and the career Grand Slam.

The American mixed eight bogeys with a lone birdie to limp into the clubhouse along with his equally dejected playing partners.

While there were plenty of players struggling on day one, the big-name trio still find themselves near the bottom of the leaderboard and with plenty of work to do if they’re to have any hope of making the cut on Friday.