Matt Fitzpatrick: A Blade with plenty of support who can really cut it 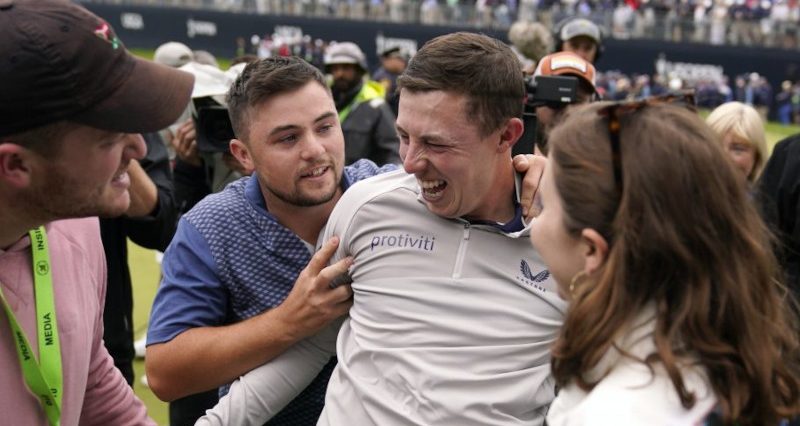 Matt Fitzpatrick won the US Open at Brookline on Sunday night after holding off playing partner Will Zalatoris in a thrilling final round.

Here are a few facts about the 27-year-old from Sheffield.

He may put down Jupiter, Florida as his address now but the former Tapton School pupil still has a membership at Hallamshire Golf Club, between Sheffield and the Peak District, where he played in the juniors.

Fitzpatrick’s Brookline win puts him in good company as the Yorkshire lad becomes just the second man – after the great Jack Nicklaus – to win the US Amateur and US Open at the same venue.

Family man Fitzpatrick had his younger brother Alex on the bag in 2013 and he was waiting for him at the 18th green on Sunday night. Don’t rule out the siblings teaming up at the Ryder Cup as Alex, a Walker Cup player, is set to make his pro debut himself.

The Fitzpatricks became firm friends with the family they stayed with in Boston during his US Amateur win nine years ago and they were back sharing their home this time. Lucky charms?

He’s a Blade. Fitzpatrick is a lifelong Sheffield United fan and went on a one-man crusade to raise their profile Stateside earlier this year – handing out replica shirts to the crowd at the famous 16th hole at the Phoenix Open. Sheffield United responded by tweeting: “Love it.”

Billy Foster has caddied for the biggest names in the game, including Seve Ballesteros and Lee Westwood, for four decades so he knows his stuff. It comes from a good place when Foster refers to his man as ‘Bernhard Langer’s lovechild’ due to his dedication and the work he puts in. “Matt is the most professional player I’ve ever had the pleasure to work for, he works so hard and does everything right,” Foster told the Daily Mail, early in their working relationship.

Fitzpatrick is recognised as one of the nicest guys in the game and that was evident as Twitter reacted to his victory. Fellow golfers Justin Rose, Sir Nick Faldo and Colin Montgomerie were quick to congratulate him while Gary Lineker, Alan Shearer and Sir Tony McCoy also weighed in with praise. And Rory McIlroy stayed around after his own final round to hug the new champion.

In the nicest possible way, Fitzpatrick is a bit of a geek. He has taken notes on just about every shot he has played throughout his career, in practice rounds as well, and is obsessed by data. So he is probably the best person to explain The Stack – the training device he’s been using, with coach Mike Walker and biomechanist Sasho Mackenzie, to increase swing speed and smash his drives longer than his bigger, more athletic rivals.