US Open: Gary Woodland leads Justin Rose by one as Brooks Koepka lurks 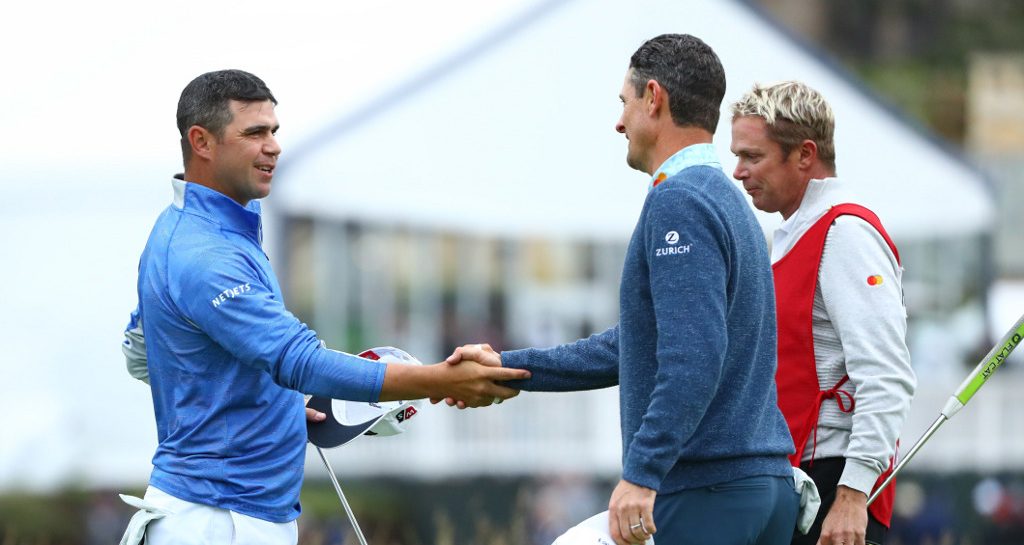 Overnight leader Gary Woodland managed to hold onto his lead at the US Open on Saturday, but there are some big names lurking right behind.

Woodland, who has never won a major but has shown the kind of grit and determination at Pebble Beach this week that suggests he might be ready to, started the third round with a two-shot lead and ended it still one stroke ahead thanks to a gutsy two-under-par 69.

Gary Woodland shot a 2-under 69 to secure the 54-hole lead and earn the @Lexus Top Performance of the Day! #LexusGolf #USOpen pic.twitter.com/4gfgN7esv9

The 35-year-old was able to make some key par saves on the back nine while adding three birdies and a solitary bogey to post a 11-under 202 total and stay in front of first-round leader Rose, who kept his chances of a second US Open title very much alive with an equally determined 68.

Woodland’s back-nine heroics included a chip-in in to save par at the 12th, and a 42-footer on the par-5 14th to avoid bogey yet again.

GARY WOODLAND, THERE ARE NO WORDS! #USOpen pic.twitter.com/vEyfiBMmof

“I felt really comfortable today, comfortable with my game,” he said. “I’m excited to be where I am right now.”

Of course, with @GaryWoodland, his chip-in to save par at 12, and his up-and-down at 14 — with a par-saving putt from outside 40 feet — were just sensational. Those are the things you have to do if you want to win a major championship….@usopengolf @USGA

Rose mixed five birdies with two bogeys and was able to finish with a birdie at the 18th to ensure he finished the day just one shot back. In fact, he trailed Woodland by as much as four on the front nine before closing the gap considerably on the back.

“I’m certainly reading the greens well,” said Rose, who missed several fairways and greens but was able to rely on his trusty putter once again.

Lying in third place a further three strokes back is danger man Brooks Koepka, the most in-form golfer on the planet, who gave himself a chance of yet another major trophy – his fifth in the space of two years and third straight at the US Open – after his third consecutive round in the 60s, a 68 to go with his opening rounds of 69.

Koepka from the fringe! #USOpen pic.twitter.com/C9xWXQKSfg

Koepka shares third place with countryman Chez Reavie and South African Louis Oosthuizen, who kept themselves in the hunt with rounds of 68 and 70 respectively.

“If you don’t drive it good around here or struggle with your iron play, you’re going to struggle,” said Oosthuizen.

Also still in with an outside chance is Rory McIlroy, who fired a one-under 70 to finish in solo sixth place on six under, five back.

McIlroy bounced back from a bogey at the par-three 17th with his third birdie of the day at 18 to give himself hope of pulling off something special on Sunday.

“I felt for the most part today I did the right things,” McIlroy said.

“And I need to do 18 more holes of that, but just get a little bit more out of the round tomorrow than I did today.”

Further down the field, Tiger Woods once again failed to get anything going, a level-par 71 leaving him on level par for the tournament in tied-27th.

Woods made five birdies on the day but also five bogeys – including two in his opening three holes – to offset any potential gains.

Tiger Woods birdies the 18th to finish a round of 71. He's even for the championship. #USOpen pic.twitter.com/vMfSANjJ0a

“I got off to a crap start,” said the Masters champion. “Two-under through three, and those are the easier holes.

“I had to try to fight back and claw out a round today, which I was able to do.”

Phil Mickelson, meanwhile, saw his hopes of completing the career grand slam disappear when he drove it into the Pacific Ocean at 18 for a triple-bogey eight and a four-over-par 75.