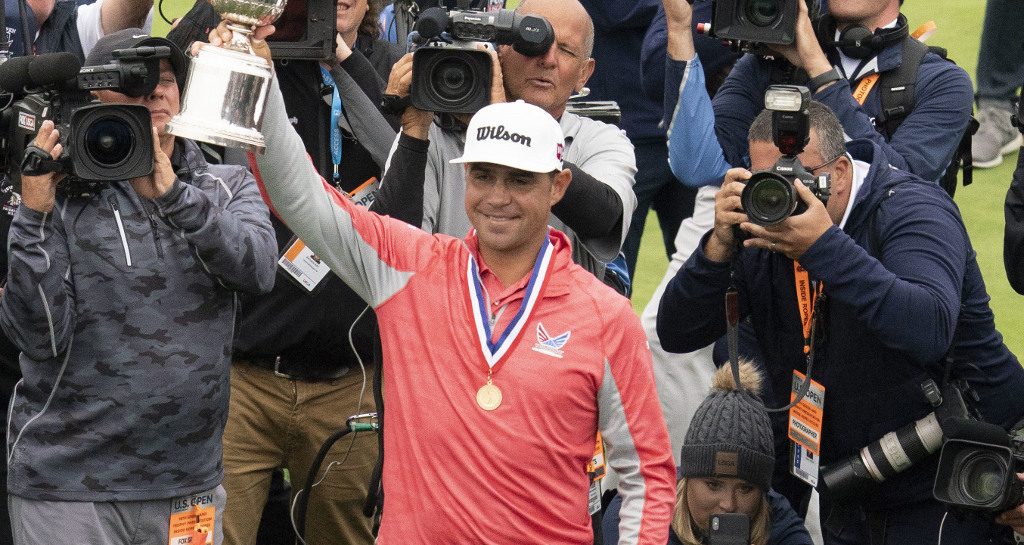 Gary Woodland showed plenty of guts as he held off defending champion and World No 1 Brooks Koepka to claim his maiden major title at the 119th US Open.

Despite his three previous PGA Tour titles, the 35-year-old from Kansas had never really been seen as a likely major winner, perhaps in part because he failed to record even so much as a top 10 in his first 27 major appearances, and prior to his sixth place finish at last year’s PGA Championship had never come remotely close to winning one.

But a lifetime of work paid off for Woodland at Pebble Beach on Saturday, as a closing two-under-par 69 saw him complete a hugely impressive three-stroke win over defending champion Koepka, whose incredible run of form nearly resulted in a third straight US Open title and fifth major trophy in nine starts.

Gary Woodland recorded his fourth-consecutive round under 70 to capture the #USOpen title and the @Lexus Top Performance of the Day! #LexusGolf pic.twitter.com/5e0VJVNC1r

Koepka’s closing 68 was not enough to erase his three-shot deficit at the start of the day. It might have been had Woodland not continued to show the kind of grit and determination that enabled him to keep Koepka at bay and hold on to the lead he first took after his impressive 65 on Friday.

“I’ve worked hard my whole life,” Woodland said. “I’ve been surrounded by amazing people and I always just wanted to be successful.

“I fell in love with golf, and it’s transcended to today.”

Gary Woodland gets his 🏆#USOpen pic.twitter.com/1Hc84nxLrA

Woodland has long been known as a long hitter, but has been working tirelessly on improving the other aspects of his game, and it paid off in spades at Pebble Beach on Sunday.

“People probably growing up said the US Open wouldn’t suit me, because I’m a long hitter, I’m a bomber,” Woodland said.

“Coming to Pebble Beach, on top of that, it’s a shorter golf course. And I went out and proved, I think to everybody else, what I always believed, that I’m pretty good.”

Even with Koepka breathing down his neck on the back nine, Woodland didn’t blink, and it would be his birdies at the 14th and 18th that ultimately proved too good for the defending champion, who had no answer for them down the stretch.

A gutsy three-wood second shot at the par-five 14th led to a birdie and a two-shot lead, while a perfect pitch at 17 after his tee shot left him in a spot of bother saw him preserve his lead.

Heading to the 18th knowing a par would be enough, Woodland produced a grandstand finish, rolling in a 30-foot putt to seal the victory in emphatic fashion.

Afterwards, Koepka, who looked to be charging to victory after opening with four birdies in his first five holes but could only muster one more birdie and two bogeys from there, had to acknowledge he was beaten by the better man.

As for Justin Rose, who started the day just one shot behind Woodland and had a golden chance of capturing his second major title, his challenge ended in disappointment, as a three-over-par 74 saw him finish six shots back in a tie for third alongside Xander Schauffele (67), Jon Rahm (68) and Chez Reavie (71).

Rose was still in it after the opening nine holes, but a trio of back-nine bogeys put pay to his chances as he wilted down the stretch.

Adam Scott (68) and Louis Oosthuizen (72) shared seventh place a further shot back, while Rory McIlroy closed with a level-par 72 to finish in ninth alongside Chesson Hadley (71) and Henrik Stenson (70) a further stroke behind.

Further down the field, Tiger Woods posted his best round of the week, a two-under 69, to finish on two under in 21st place.