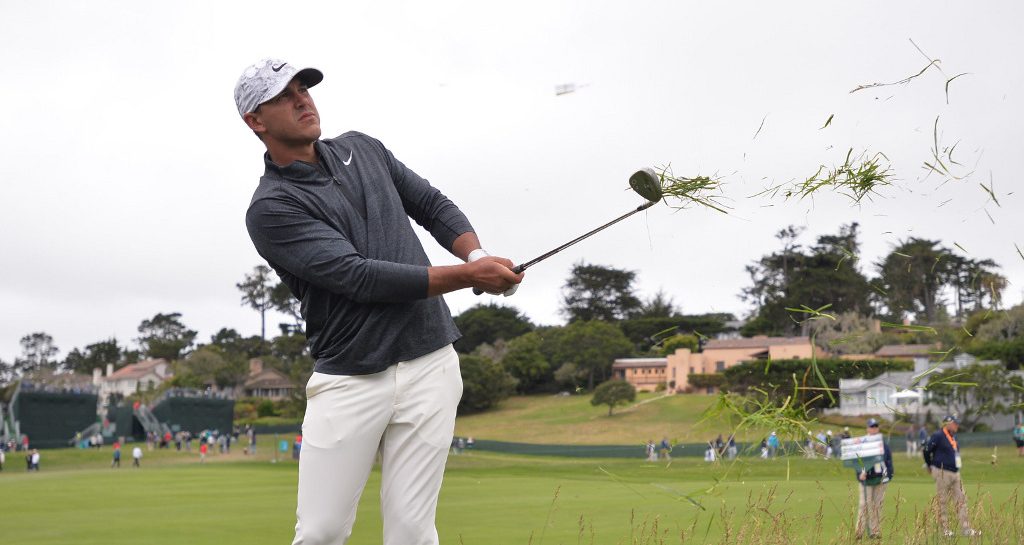 Two-time defending champion Brooks Koepka moved into tied-third place at the US Open on Saturday, spelling potential danger for the two players just ahead of him.

Gary Woodland still leads Justin Rose by one shot at Pebble Beach after a gutsy 69 to Rose’s 68 in the third round, but even though Koepka lies three shots back of Rose and four behind Woodland, his presence right behind them on the leaderboard seems like a bit of an ill omen if you happen to be rooting for either of those two players.

Koepka has, after all, won no less than four of the last eight majors over a two-year span dating back to his victory at the 2017 US Open at Erin Hills.

The 29-year-old successfully defended that title at Shinnecock Hills the following year while picking up successive PGA Championship titles to boot, and it’s that kind of runaway success that has many seeing him as the potential favourite on Sunday.

Koepka from the fringe! #USOpen pic.twitter.com/C9xWXQKSfg

“I feel good,” said Koepka. “I feel like if I can just make a few putts, I feel like I could be right there, right next to Gary. And it’s been very close.

“I feel like eventually these birdies have to come. I’ve hit so many good putts that just haven’t gone in.”

Should those putts start to fall and the birdies start to come, Woodland and Rose will be forced to come up with an answer. Koepka currently leads the field in Greens in Regulation (76 percent) and Strokes Gained, which would make for a deadly combination if he starts to find his form on the greens.

And while none of his four previous major victories have seen him come from behind to win, Koepka doesn’t feel like he needs to do anything different on Sunday.

“But it would be nice to get off to a good start, be 3-under through 7, somewhere around there, take advantage of those opening holes. And you never know what’s going to happen.

“(I’ll be) trying to be three back going into the back nine, you never know from there, see what happens. Make a couple of birdies, put some pressure on guys. “And from there, if I win, great; if not, I felt I’ve given it all I had this week and it’s just not my week.”