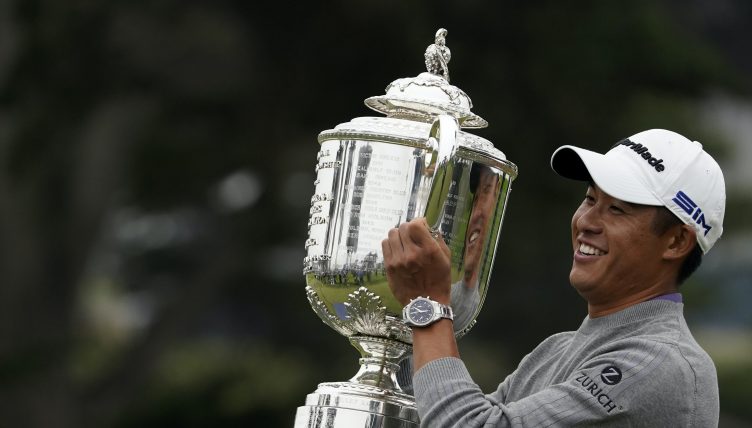 Collin Morikawa became the ninth player to win on his US PGA Championship debut.

The 23-year-old was playing in only his second major and emerged from a congested leaderboard to win by two shots.

Here, the PA news agency looks at the other eight people to have won the tournament at their first attempt.

The Cornwall-born Barnes, one of the leading figures in professional golf’s infancy in the United States, won the inaugural US PGA by beating Scot Jock Hutchison one-up in the then match play event at Siwanoy Country Club in New York. He also won 500 US dollars and a diamond studded gold medal. Barnes went on to win another US PGA title and also The Open.

The American beat the great Gene Sarazen (already a winner of four of his seven major titles) 5&3 in the semi-final and Denny Shute 2&1 in the final at Wannamoisett Country Club, Rhode Island. It was one of only two professional wins by the caddie-turned-player as he was plagued by back problems in a career cut short by spinal meningitis.

Indiana-born Hamilton beat the odds to defeat Byron Nelson, winner of five major titles at the time, at Washington’s Manito Golf and Country Club, the first major championship played in the Pacific Northwest. Hamilton won the 36-hole final one-up having birdied the last to halve the hole to secure victory.

Ford, who turned down a contract offer to play baseball for the New York Yankees, claimed the first of his two majors with a 4&3 win over Cary Middlecoff at Meadowbrook Country Club near Detroit. All-square after 25 of their 36-hole final, Ford birdied four of the next six holes to initially take the lead for the first time in the match and then clinch the title.

Rain on the Sunday at Inverness Club in Ohio saw the final group of Tway and Greg Norman, the overnight leader, complete one hole but when they returned on Monday the Australian’s four-shot lead – the event a strokeplay competition since 1958 – was cancelled out with four to play. Tway holed a bunker shot for birdie at the last and Norman missed his putt to tie.

The most unlikely of debut wins as Daly was the ninth alternate who only qualified after several others pulled out and when Nick Price withdrew for the birth of his first child Daly hired his caddie Jeff Medlin. The big-hitting American led for the final three rounds at Crooked Stick in Indiana, holding off Bruce Lietzke to win by three and lift the first of his two major titles.

Micheel began the week ranked 169th in the world and making his 164th PGA Tour start but after three sub-60 rounds at Oak Hill Country Club he went into the final round in a share of the lead on four under with Chad Campbell. Micheel outscored his American compatriot 70 to 72 to pull off a surprise victory. The US PGA remains Micheel’s only PGA Tour title after almost 400 starts.

Bradley began the final day just one off the lead but a triple-bogey six at the 15th appeared to have ruined his chances only for two birdies coming home to set the clubhouse lead at eight under at the Atlanta Athletic Club. Overnight leader Jason Dufner collapsed down the stretch, blowing a five-shot lead with four to play to slip into a play-off, which he lost by a stroke after three extra holes. Bradley also became the first player to win a major using a long-handled putter.