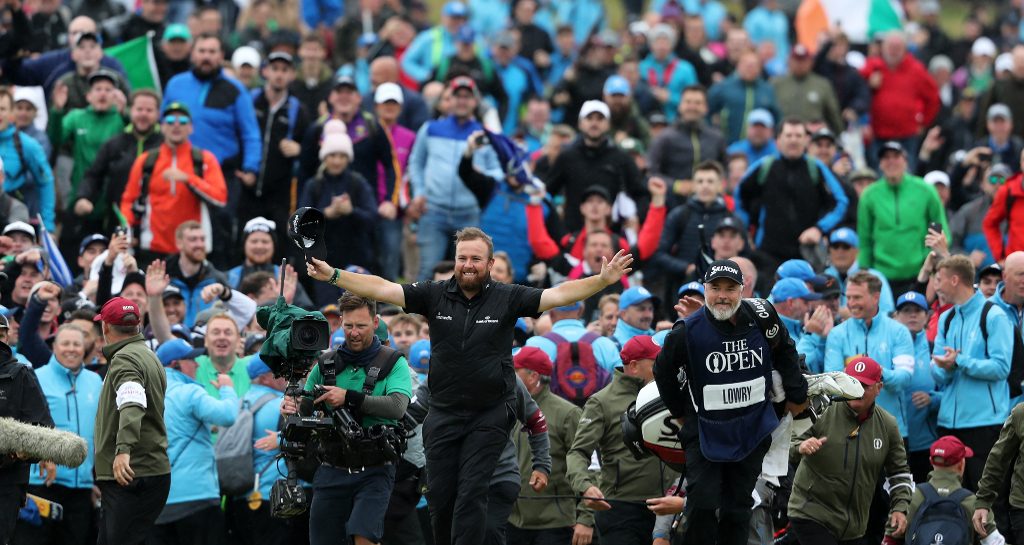 Shane Lowry realised his tremendous potential on the greatest stage of them all as he soared to a remarkable six-shot victory in The Open Championship.

As conditions seriously worsened throughout the day, an unflappable Lowry never wavered, closing with a one-over-par 72 to become the first Irishman to lift the Claret Jug since Padraig Harrington at Royal Birkdale in 2008, sparking jubilant scenes.

The moment that sealed it for Shane Lowry, a dream turned into reality for the Irishman 🇮🇪 #TheOpen pic.twitter.com/QbsgNbGtW6

Starting the final round with a formidable four-shot lead, Lowry’s closest rivals were all hoping for the forecasted bad weather to descend upon Royal Portrush and throw the leader off his game.

But while the wind and rain did arrive as predicted and the conditions got mighty tough, Lowry dealt with it as well as any of the frontrunners.

No one was able to keep bogeys off their cards, and with the Irishman still able to find a few birdies like he’d done all week, his lead was never in jeopardy.

Tommy Fleetwood was the only player within reasonable touching distance at the start of the day, and while an early bogey from Lowry did briefly bring the Englishman to within three shots of the lead, that was as close as he ever got.

Lowry soon steadied the ship with birdies at the fourth, fifth and seventh to increase his lead to six, and even though he would go on to make several bogeys after the weather turned sour, Fleetwood had his own battles to contend with and was never able to seriously cut into the deficit.

When Fleetwood double-bogeyed the 14th and Lowry rolled in a birdie at the 15th to restore his six-shot lead, the writing was on the wall.

For Lowry, the win erases the disappointment of the US Open at Oakmont three years ago, when he also started the final round with a four-shot lead only to hand the title to Dustin Johnson following a disappointing 76.

A talented golfer with a WGC victory and four European Tour titles to his name, Lowry has often saved his best for the majors.

Some players seem to thrive when the stakes are at their highest, and with the added motivation of playing on the Emerald Isle in front of the Portrush crowds, Lowry seemed to find an extra level this week, one that made even the best players in the world seem ordinary in comparison.

His 54-hole total is a new Open Championship record, while his course-record 63 on Saturday will go down as one of the great Open rounds.

Tommy Fleetwood ultimately closed with a three-over 74 to secure his second runner-up finish in the majors following his impressive performance in the US Open at Shinnecock Hills a year ago.

As one of the only later starters not to finish over par, American Tony Finau secured third place a further two strokes back thanks to a gutsy 71.

Lee Westwood shot a two-over 73 to share fourth place with World No 1 Brooks Koepka a further shot behind.

Koepka uncharacteristically started the day with four straight bogeys before bouncing back with an eagle at the par-4 fifth, but it was too little too late.

Having missed the worst of the conditions, Scotland’s Robert MacIntyre closed with a 68 to finish an impressive sixth alongside Rickie Fowler (74) and English duo Tyrrell Hatton (69) and Danny Willett (73).

Defending Open champion Francesco Molinari saved the best for last, posting a superb 66 earlier in the day that almost ended up securing him a top-10 finish.