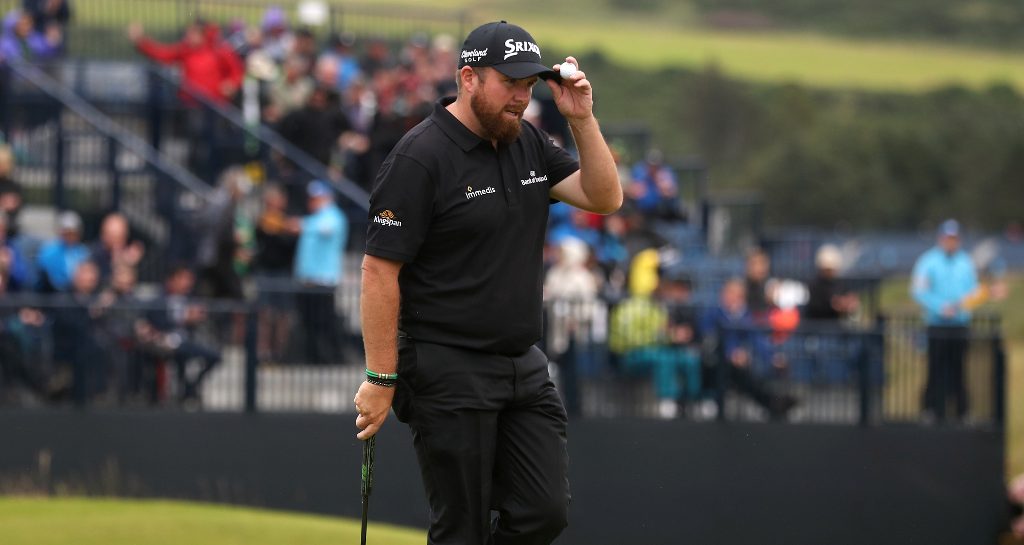 After four straight missed cuts in the Open, Shane Lowry has well and truly turned things at Royal Portrush this week.

The Irishman carded a second consecutive 67 on Friday to join American JB Holmes in the lead on eight under par – the best 36-hole score of his major career.

It's all in the fingertips for Shane Lowry. 😳pic.twitter.com/zgXDvbCJEm

English duo Tommy Fleetwood (67) and Lee Westwood (67) are a shot behind, while Justin Rose (67) follows a further shot back alongside Australian Cameron Smith (66) and South African Justin Harding (65).

Lying a stroke behind on five under are two dangerous multiple-time major winners in World No 1 Brooks Koepka (69) and a resurgent Jordan Spieth (67), who share eighth place with Andrew Putnam (67) and Dylan Frittelli (69).

With so much talent near the top of the leaderboard, the stage is certainly set for a fascinating weekend.

A share of the lead in a major championship is nothing to sneeze at, but Lowry might be regretting not being further ahead after getting to 10 under following his sixth birdie of the day at the 10th.

At that point he held a two-stroke advantage, but conditions would get tougher on the back nine, and bogeys at 14 and 18 saw him drop down into a share of the lead with Holmes.

Still, he was more than happy to take that.

☘️ @TheOpen crowds have been amazing.

I am looking forward to the weekend now. pic.twitter.com/qf6HLwtczi

“I had a great time today, it was just unbelievable. One of those days where you find yourself pinching yourself,” he said.

“I can’t explain how good the crowds were, a day that I’ll remember. Walking down 18 was something special. I’m a bit disappointed to bogey the last but I’m right where I wanted to be and delighted with my two days’ work.

“I’m in a great position going into the weekend of an Open Championship but there’s two long days left. There are times when it’s not going to be easy and I’ve just got to take it on the chin.”

We asked #TheOpen co-leader Shane Lowry what it would mean to win at Royal Portrush. Is a career-defining victory in Lowry's future? pic.twitter.com/rxAJY2GK8r

As for Holmes, he followed up his opening 66 with another impressive five-birdie, two-bogey 68.

The American revealed afterwards he’s missing his dog Ace, who travels with him all around the USA when he plays on the PGA Tour but wasn’t able to make the trip across the Atlantic.

“He’s been on hundreds of planes probably. I don’t know how many flights he’s taken but he’s been on a bunch,” Holmes said. “There’s a lot of extra paperwork to go overseas. My wife usually handles all that and she’s been busy with an 18-month-old. So we didn’t have the time.

“I miss my son and I miss the dog. They travel with us. And like I said, we miss them when we’re here.”

Fleetwood briefly held the clubhouse lead after mixing six birdies with just two dropped shots in a round that left him pleased with his efforts.

“I’m happy that I had a chance to scrap today and actually did really well, was up to the test and, again, did a lot of good stuff,” he said.

A victory for Westwood, who came so close to winning a major on so many occasions but was never quite able to pull it through, would certainly be a popular one.

“I haven’t got any expectations. I’m just swinging quite well at the moment,” he said.

“I’ve had a couple of weeks of links golf where I played well and made the most of how I played, and this week it’s happening.

“It’s nice to do it at The Open Championship, it’s a big tournament and prestigious tournament and on a great golf course. It’s just happened at the right time.”

Meanwhile, as expected, Tiger Woods and Rory McIlroy both failed to make the cut, despite firing much improved second rounds. It was oh so close in McIlroy’s case, as he rallied superbly but still came up just short.

Woods went from a 78 to a 70 to finish on six over, while McIlroy bounced back with a splendid 65, the joint-lowest round of the tournament and a full 14 strokes better than his opening round, to finish just one stroke below the cutline.

Having fired seven birdies and made just a single bogey through 16 holes, McIlroy needed just one more red number on 17 or 18.

Sadly, it wasn’t to be, but at least the Northern Irishman gave his home fans something to smile about before departing the scene.

A valiant fightback from a great Champion @McIlroyRory #TheOpen pic.twitter.com/KpLce7Ucet

As for defending champion Francesco Molinari, a bogey at 17 left him needing a par at the last to avoid missing the cut, and the Italian just about managed to keep his title defence alive as he signed for a 69.