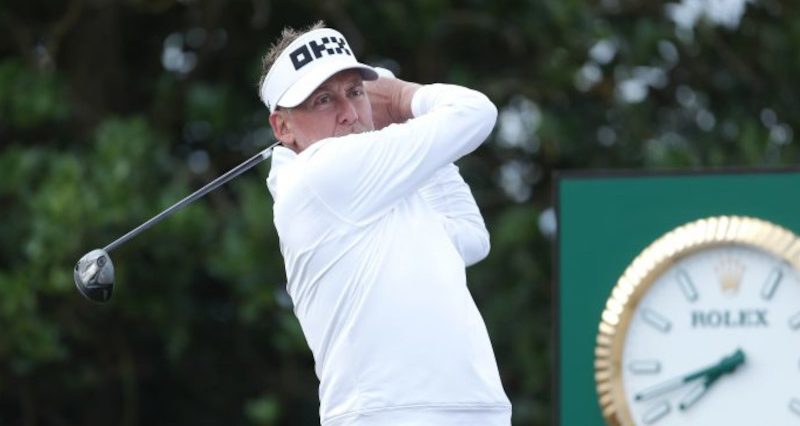 Ian Poulter insisted he did not hear the boos which greeted him on the first tee of the 150th Open.

And the Ryder Cup star said his reception had no influence on his opening shot being pulled across the widest fairway in golf and stopping just a few feet away from going out of bounds.

Poulter was the first of the 24 players who have signed up to the controversial Saudi-backed LIV Golf series to tee off on Thursday and a handful of spectators could be heard booing as the majority applauded.

Poulter went on to make par on the first and holed an incredible eagle putt from around 150 feet across the ninth green on his way to a three-under-par 69.

“Didn’t hear one,” Poulter said when asked about the boos. “I actually thought I had a great reception on the first tee, to be honest. All I heard was clapping.

“I thought there was a couple of thousand (spectators) on the tee. So they obviously drowned out the one.”

The action at St Andrews had got under way less than 24 hours after R&A chief executive Martin Slumbers had said banning LIV Golf rebels from next year’s Open was “not on the agenda”, but that entry criteria could be changed.

In a surprisingly strongly-worded statement before taking questions in his traditional pre-Open press conference, Slumbers said the Saudi-funded breakaway was “entirely driven by money” and not in the “best long-term interests of the game”.

“Purposely haven’t looked at all,” Poulter said when asked for his reaction. “So I don’t want to know. You can tell me, I’m not going to listen. I’m here to play golf.

“This could probably be my last Open Championship at St Andrews so I’m trying to enjoy it despite the questioning.

“I’m staying out of the way. I’m not reading social media. I just want to play golf, right? I can only do my job. If I listen to a lot of nonsense, then I’m going to get distracted. I don’t play golf very well distracted, so separating myself away from that this week has obviously been a good thing.”

Tiger Woods accused LIV players of “turning their backs” on the PGA Tour during his pre-tournament press conference and the likes of Rory McIlroy and Justin Thomas have spoken out strongly in defence of the establishment.

“Even the people that have been vocal have been pretty decent to me,” Poulter added. “So whether they accept that I’m an old fart or not and let him go about his merry business the way he does, I don’t know. I’ve only had good comments.

“Even Thomas Bjorn, of all people. Thomas is Thomas. He’s extremely vocal. We disagree, but we’re friends, right?”

Former Open champion Ian Baker-Finch famously pulled his tee shot on the first out of bounds in the 1995 Open and Poulter made reference to that as he discussed his narrow escape.

“Trying to hit it down that left half of the first and hitting a toe-pull is not really what you want,” he said. “When I walked off that first tee (I’m thinking) is it Ian James Finch or what could this be? It was five feet from out of bounds.

“The barrier was in the way, took a drop, and got off to a decent start after that really. Played nice, plenty of chances and a Brucie bonus on nine from about 150 feet I’d estimate.

“I would love to be able to do something special on Sunday as everybody competing in this 150th Open dreams of holding that Claret Jug. Getting off to a nice start is good, but it’s links golf. There’s a lot of golf to play.”