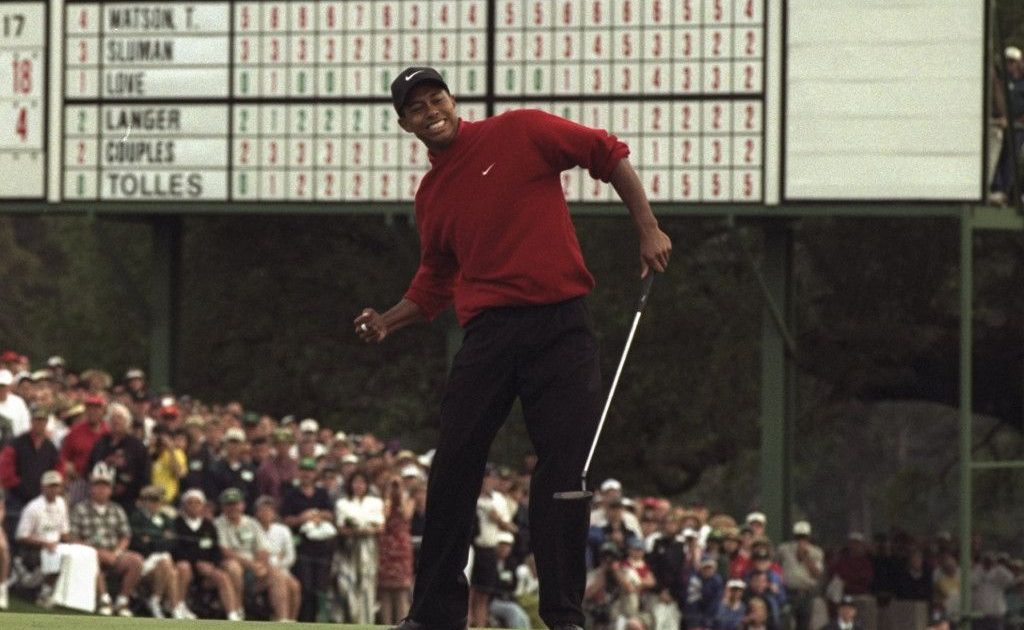 It was 25 years ago and he was only seven years old at the time, but Rory McIlroy’s recall of Tiger Woods winning the 1997 Masters proves unerringly accurate.

Already aware of Woods dominating amateur golf in the United States before turning professional in August 1996, McIlroy was not about to miss the rising star’s major championship debut in the paid ranks.

“The ’97 Masters, yeah, I watched it all,” McIlroy told the PA news agency on the eve of Woods being inducted into the World Golf Hall of Fame last month.

“He shot 40 on the front nine on Thursday, came back in 30, and then just completely blitzed the field after that. I remember him hitting wedge into 15 both days on Friday and Saturday.

“It was just a complete masterclass. I think he went like 66, 65 on Friday, Saturday. Then he closed with a 69 on Sunday.

“I remember a lot of it. I remember being so excited to sit down and watch it. BBC was still covering it. At that point, you’re still only seeing the back nine. You never really saw the front nine at that point.

“I remember sitting on the sofa with my dad and watching it and being able to stay up late to watch him win on a Sunday night before having to go to school on Monday.”

Asked if he had to plead to be allowed to stay up beyond his bedtime, McIlroy added: “No, my dad would pick and choose his battles. That was one that he probably didn’t want to fight over.”

And yet it could easily have been all so different.

As US Amateur champion, Woods had been paired with defending Masters champion Nick Faldo for the first round and both men took 40 shots to cover the front nine.

Woods had bogeyed the first, fourth, eighth and ninth as a result of wayward tee shots, which came as a massive shock to the system having shot 59 while playing with Mark O’Meara at his home course of Isleworth the previous week.

But as his caddie Fluff Cowan offered words of encouragement while they made the short walk from the ninth green to the 10th tee, Woods was busy figuring out that his backswing had been too long and setting in motion the events which could kickstart his extraordinary career.

The 21-year-old duly birdied the 10th, chipped in for another on the 12th and hit a six iron into the par-five 13th to set up a third. A 350-yard drive on the 15th was followed by a pitching wedge to four feet for an eagle and Woods was suddenly under par.

After a birdie on the 17th, Woods narrowly missed for another on the last and a back nine of 29, but happily signed for an opening 70 to lie three shots behind leader John Huston.

“The mental training that my dad had put me through proved itself during that short walk from the ninth green to the 10th tee and was completely vindicated by the way I played on the back nine,” Woods later recalled.

“He had trained me to be what he sometimes called a ‘cold-blooded assassin’.”

There were, of course, still three rounds to play but Woods was in no mood to take his foot off the accelerator. A second round of 66 gave him a three-shot halfway lead and set up a third round alongside nearest challenger Colin Montgomerie.

By the end of that round, ‘nearest challenger’ was something of a misnomer, Woods shooting 65 to Montgomerie’s 74 to hold a nine-shot lead over Costantino Rocca.

“If I needed any extra motivation for my third round, Colin Montgomerie provided it during his media conference the day before…. saying that everybody would see what I was made of and that his experience might be a ‘key factor’,” Woods said.

But if Montgomerie had been wrong on that score, he was spot on when he predicted there was no chance of Woods squandering his lead as Greg Norman had done when six shots clear of Faldo 12 months earlier.

A closing 69 gave Woods a record total of 18 under par, a record winning margin of 12 shots and, at the age of 21, made him the youngest winner in Masters history.

It was a victory which also had wider implications given that Woods was the first African-American to triumph at Augusta National, a club whose co-founder Clifford Roberts once said: “As long as I’m alive, golfers will be white and caddies will be black.”

Roberts died 20 years before Woods’ seismic victory, the first of five Masters triumphs but the most important for Woods, the game of golf and even the wider world.

“Quite a few of Augusta’s staff, mostly black people, had left their posts and gathered outside on the lawn and on the veranda on the second floor,” Woods recalled of the presentation ceremony.

“They wanted to thank me and I wanted to make sure they knew how thankful I was for their support. Their presence while I spoke on the putting green that first time was significant in a way that couldn’t be repeated.

“A barrier had been broken.”