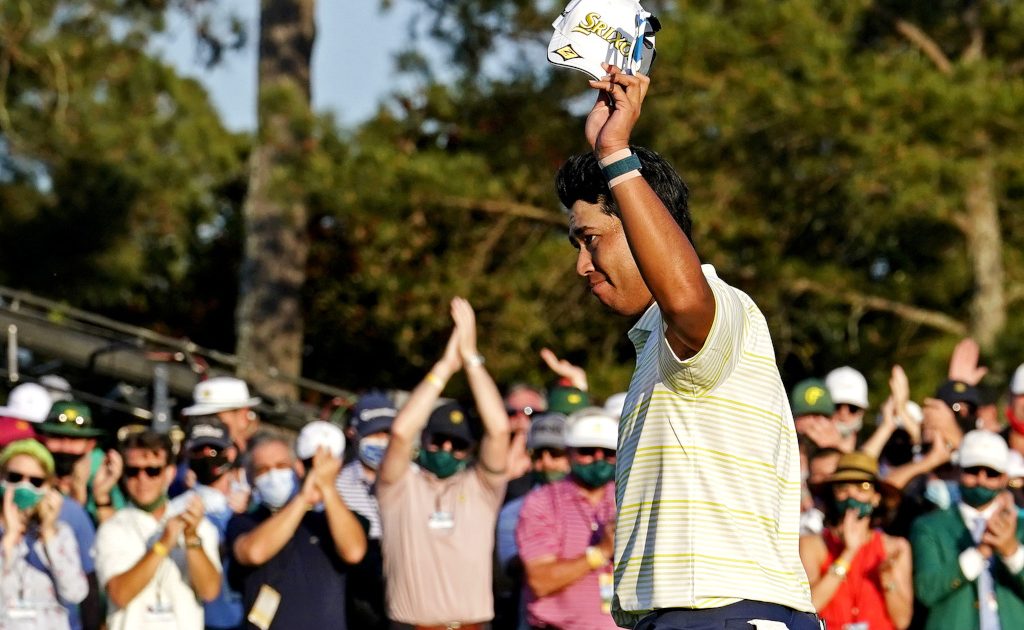 Successfully defending the Masters is so difficult that just three players have done it, namely Jack Nicklaus, Nick Faldo and Tiger Woods.

Hideki Matsuyama hopes to be the latest to attempt to join that illustrious trio in the history books after recovering from a back injury in time to take his place in the field at Augusta National – but further doubt over his participation came after he withdrew from the Valero Texas Open on Friday with a neck problem.

If fit, Matsuyama has one more hurdle to overcome before he can fully focus on his title defence, with the prospect of making a speech at the traditional Champions Dinner weighing heavily on the Japanese star’s mind.

“Of course I’m looking forward to returning to Augusta National as the defending champion,” Matsuyama said.

“The same with the Champions Dinner. I don’t speak English very well and so it’s kind of a two-sided coin.

“I’m looking forward to it, of course, to be with all those great past Masters champions, but at the same time very nervous about the speech I will be giving.”

Public speaking is not high on the list of Matsuyama’s favourite activities and he has previously made it clear that speaking to the media is something to be tolerated rather than enjoyed.

However, speaking through his interpreter and right-hand man Bob Turner on a teleconference ahead of his title defence, Matsuyama was happy to look back on his historic victory 12 months ago, when he became the first male Japanese player to win a major title.

“Being the first Japanese to win a major, and especially the Masters, has made me really happy,” the 30-year-old said.

“How it’s changed my life is a good question. I haven’t really figured that out yet. I know I’m a happier person. I’ve also noticed people have received me differently. It’s been a wonderful experience.

“If that’s changed my life, I don’t know. But that’s really the one impression that I’ve had this past year is how warmly people have embraced me and received me and cheered me on.”

A third round of 65 meant Matsuyama took a four-shot lead into the final round last year, but that was reduced to a single stroke within a matter of minutes as he bogeyed the opening hole after Will Zalatoris had birdied the first and second.

Birdies on the second, eighth and ninth restored Matsuyama’s healthy lead but as Zalatoris fell away, Xander Schauffele closed to within two shots following four straight birdies from the 12th, only to bogey the 16th.

Matsuyama had the luxury of dropping shots on the 16th and 18th and still finishing a shot ahead of Zalatoris, with the magnitude of his achievement evident in his emotional reaction.

“Those tears, it wasn’t because I won,” Matsuyama said. “Walking up after the 18th green, I saw all my team and they were all crying, and I think that’s probably what started me crying, too.

“But it was really cool to be able to share that with my team. The feeling of ‘we finally did it’. That was the reason why those tears were falling down all of our cheeks.”

That was not the only image from the final round to go viral, Matsuyama’s caddie Shota Hayafuji making headlines for taking the flag from the 18th hole as a memento before turning to face the fairway, removing his cap and bowing as a mark of respect.

“I didn’t see it in person, but I did see it on TV and I thought it was something very special,” Matsuyama added.

“I’m glad that Shota did it. It’s a sign of respect, not only to the Masters tournament but Augusta National. I never really thought it would receive the attention that it has generated.”