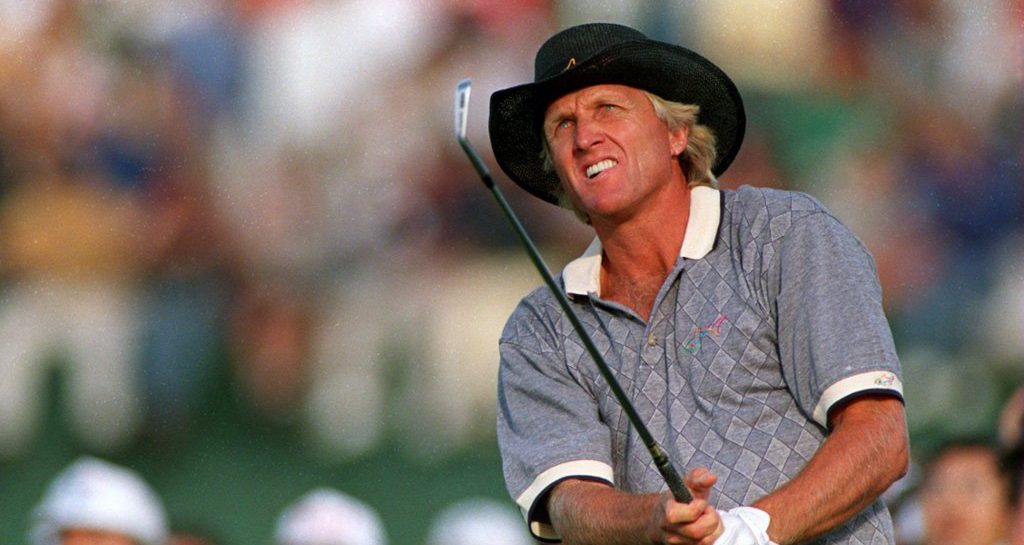 The Australian golfer and the President of the United States have been cosying up on Twitter – it’s not the first time for the Shark.

Greg Norman is known for many things.

There’s his game: a magnificent driver of the golf ball in an era when it really mattered.

His look: the honed torso of a swimmer and the sun-dried face of Crocodile Dundee.

His achievements: winner of 88 professional titles worldwide including two majors.

His near-misses: no golfer has found more tragi-comic methods of not winning major championships.

His off-course wheeler-dealing: all manner of business success that goes far beyond the traditional ex-golfer schtick of polo shirts and course design.

But increasingly he’s forging another route and it’s a very strange one: Greg Norman is the self-appointed provider of pep talks to the leader of the free world.

In the latest example he appeared on Fox TV, fluffing Donald Trump, an act that the President was quick to brag about:

Just watched @SharkGregNorman on @foxandfriends. Said “President is doing a great job. All over the world, people want to come back to the U.S.” Thank you Greg, and you’re looking and doing great!

The Shark wasted no time responding, high achievers fondling each other on social media:

.@realDonaldTrump it's all true! Thank you Mr. President! https://t.co/3QvNCmkyg9

All a bit peculiar really, this business of a nearly-very, very good golfer backslapping a politician and yet it’s far from a one off. In fact, Norman has been doing it for a while.

In a compelling 2015 interview with the Melbourne Herald Sun’s Hamish McLachlan back Norman explained that Jack Nicklaus and Raymond Floyd had “been there for me whenever I was down and out”.

“That’s why,” he continued, “even when I see Presidents of the United States getting hammered, I will pick up the phone, and just thank them for what they do to help keep the freedom of the world.”

Hang on, you might be thinking, that’s not a natural progression. That’s not one thing leading naturally to another.

Instead it sounds a lot more like the most mental episode of The West Wing ever.

“Mr President, we have a natural disaster in the midwest, Russia has invaded Germany, BP has sunk Florida in an oil spillage and a lady in Michigan says she’s carrying your child. But Mr President?”

“Greg Norman’s on the phone.”

“What a guy. He’s always there for those of us who sit here in the Oval Office. Put him through, Leo.”

Nor is the odd Trumpet call the limit of the Shark’s interest in politics.

A few years ago he and Colin Montgomerie were miked up during the Heineken Classic, the idea being that TV viewers would gain insight into strategy and player personality.

What it got instead was this: on the fourth hole Norman asked Montgomerie if he had enjoyed a recent visit to Singapore. Montgomerie said he had.