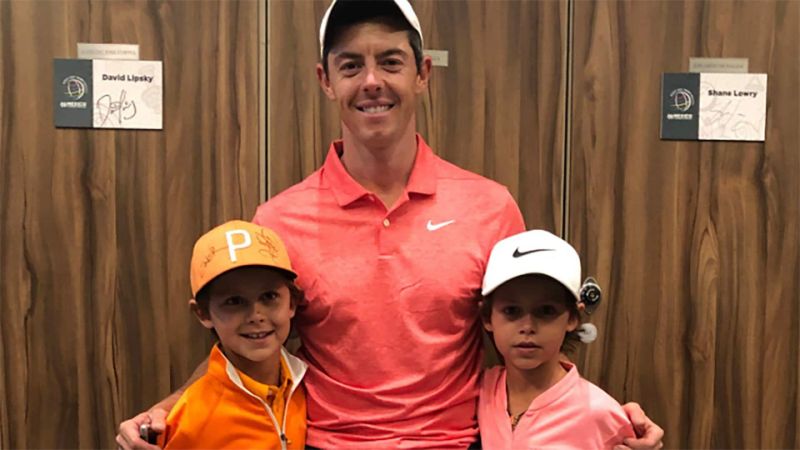 Rory McIlroy made a crying young fan’s day at the WGC-Mexico Championship by giving him some souvenirs and a first-hand tour of the players’ locker room.

As McIlroy wrapped up his final-round 67 at Chapultepec Golf Club on Sunday, he spotted a young fan – dressed exactly like him – crying because he was sad his favourite player – McIlroy – didn’t win.

A day they will never forget.

McIlroy went over to give the boy a hug and then invited him and his brother – who was dressed like Rickie Fowler – to take a tour of the dressing room.

The youngsters not only got to spend one-on-one time with McIlroy, but they also left with a signed photo, glove and shoes.

Great to enjoy the moment with you @rickiefowler 😀

It’s a day the two boys won’t soon forget, and it showed what a class act McIlroy is when it comes to dealing with fans.

Reflecting on his runner-up finish to Dustin Johnson in Mexico, McIlroy said he was confident a return to the winner’s circle wasn’t far away for him.

A young fan dressed like @McIlroyRory was in tears after he finished runner-up.

Rory took him and his brother to the locker room and gave them signed shoes and a glove. #LiveUnderPar pic.twitter.com/HQUYyXJUxX

“It was good,” he said. “Some weeks you play well and someone just plays better and that’s what DJ did this week. When DJ has got a four-shot lead and goes out and shoots five under par, he’s not going to lose.

“My game is right there, I’m really happy with everything. I’ve just got to stay patient, look at the positives and just keep persisting, putting myself in positions and sooner or later it’ll go my way.”