Kuchar and Garcia clear the air in jokey video 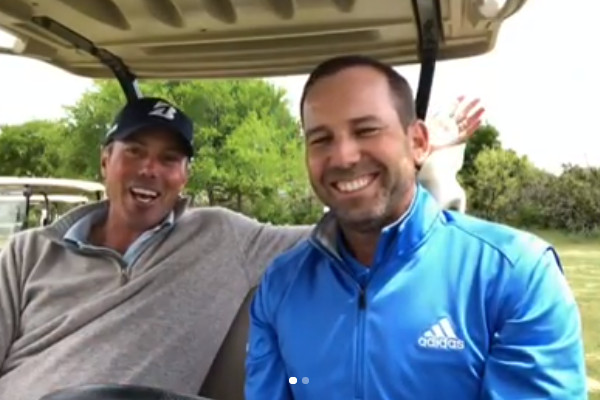 Sergio Garcia and Matt Kuchar met up on Monday to clear the air after their controversial incident at the WGC-Match Play.

Perhaps mindful of the negative press they’d both been receiving, the duo decided to film a short clip showing that all was now well between them.

It followed the incident that marred their quarter-final clash in Austin on Saturday, when Garcia missed a par putt at the seventh hole and then quickly lipped out a tap-in before asking Kuchar to concede the putt.

SEE ALSO: Sergio Garcia and Matt Kuchar can’t seem to help being themselves

Garcia then told Kuchar he could still concede the putt, but the American wasn’t feeling particularly generous and ended up taking the hole, which led to the Spaniard losing that famous temper of his.

But all’s well that ends well, and Garcia appears to not hold any ill-feelings over the incident, judging by the clip he shared of the two having a chat in a golf cart.

“What’s gone on with the aftermath is just incorrect, wrong and shouldn’t happen,” Kuchar said. “I want to tell you, Sergio handled the thing extremely well. When he missed the putt, we came off seven and he said, ‘You know what, I missed it. It’s your hole.’ I told him how bad I felt, didn’t feel right at all [and I] never want to win on a technicality.”

Kuchar also said that Garcia didn’t ask him to concede the next hole, as had been reported.

“I know I made a mistake on seven and, you know, didn’t give [Kuchar] time to say ‘that’s good,’ even though, obviously, we all know in our minds that it was good because it was a short putt,” Garcia said. “But at the end of the day, I made a mistake and he unfortunately didn’t know how to make up for what happened. But it’s all good. We’re all good.”

“It was a great match after all,” Garcia added. He played better than me and beat me, so it’s as simple as that.”