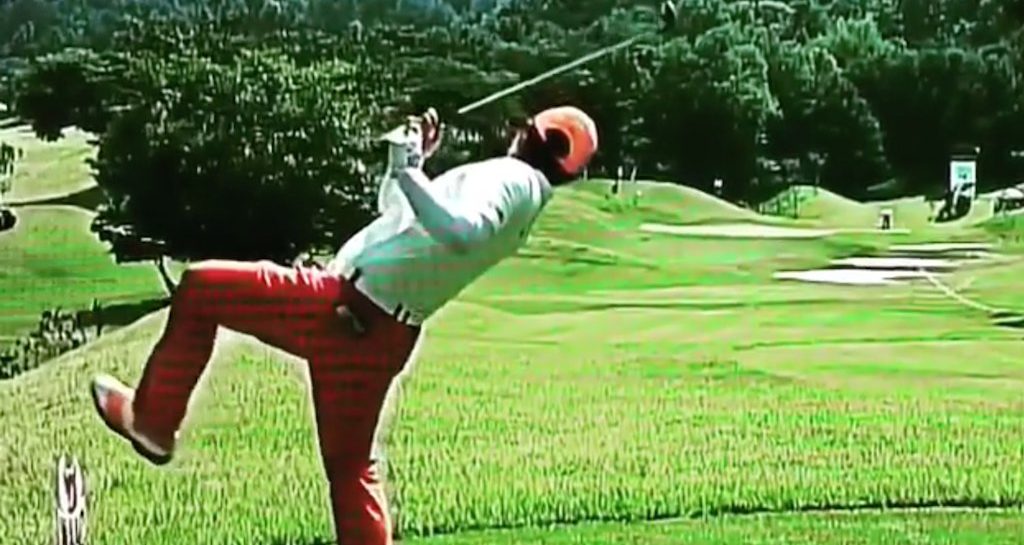 Hosung Choi’s recent victory at the Casio World Open in Japan was remarkable for a number of reasons – not least of which because of his unusual swing.

Choi defied all conventional golfing wisdom as he claimed a one-shot victory over Brendan Jones to secure one of the biggest titles on the JGTO.

It’s very rare that 45-year-old golfers suddenly turn into world beaters again, five years after their best seemed to be behind them, and it’s even rarer when that sudden success comes about because of such a dramatic change in swing.

While it’s not quite as outrageous as the run-up swing Adam Sandler helped popularise in the film ‘Happy Gilmore’, it’s almost every bit as ungainly in its own way.

Choi literally leans over and swings himself off his feet, as if he’s shaking off an imaginary tackle after making contact with the ball. It’s also been described as a “back-leg kick around” before moving through the impact position – like Arnold Palmer, if he’d had a few too many, anyway:

Still, Choi leaned, kicked and swung his way through 72 holes at Kochi Kuroshio Country Club last week before nailing a birdie on the 72nd hole to clinch a one-shot win:

Wow. He did it pic.twitter.com/K4AtvlnuIe

And perhaps most incredibly of all – Choi’s newfound success doesn’t seem to be in spite of his incredible swing – but because of it.

The swing only recently entered Choi’s game, a natural adjustment he made after he started to lose flexibility and distance with his traditional one.

And it’s clearly paying dividends, as Choi returned to the winner’s circle for the first time in almost six years – at the ripe old age of 45.

Don’t expect Choi’s newfound success to spark a wave of imitators, however. That swing is definitely one of a kind.