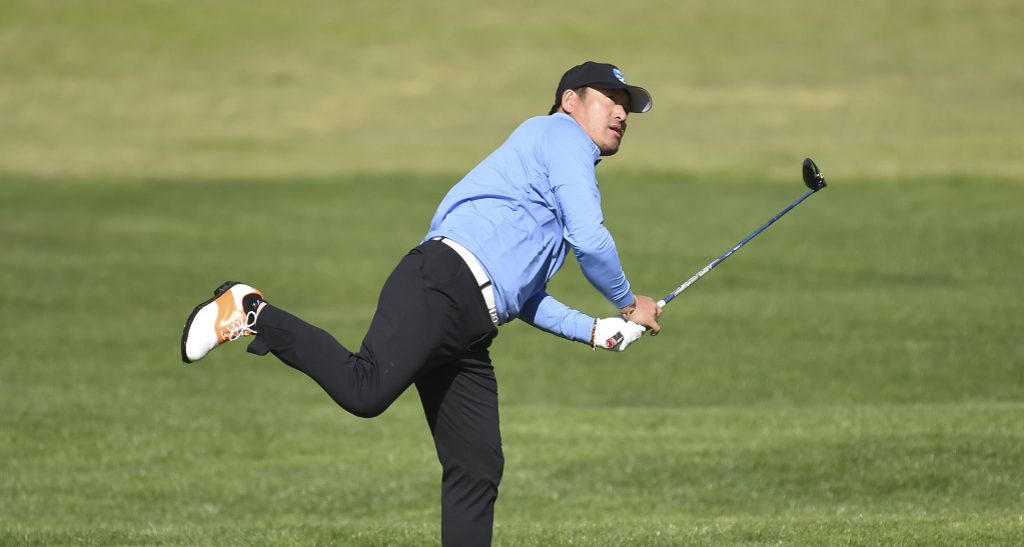 In one of Karl Pilkington’s travel programmes, he meets up with a former high-flying banker who has dropped out of the rat race and now spends his time on the streets, eating free food that restaurants discard into skips.

A different sort of documentary maker would have looked for the deeper significance in the man’s actions, gently trying to put meaning to the dramatic change in lifestyle.

Instead, Karl, in his flat Manchester accent, asks gruffly: “What are ya playing at?”

I always have these words in my head when I see Ho-sung Choi swing a golf club. What is he playing at? Why the stupid follow through? Come on mate, that’s just daft.

And yet the Korean entered last week’s Kenya Open at a respectable 209th in the world golf rankings. At the back end of 2018 he’d reached 194th after winning the Japan Tour’s Casio World Open and following it up with two top 12s.

But what is going on with that swing?

Choi inevitably has to address this question on a regular basis but he’s happy to do so.

“Everything changed in 2013,” said the Korean. “I remember trying my current swing when I was in deep rough, and after that moment I have been using the swing ever since.

“I swing the way I do because it best fits my body. I started golf at an old age compared to a lot of other golfers and as I have gotten older (he’s now 45), I have become less flexible, so I felt I needed to adapt my swing as I wasn’t hitting the ball as far as other players.

“I only use my follow through when I need to hit the ball really far – but I have to do it more often as I am getting older.”

Several top golfers have been quizzed about Choi and Rory McIlroy had this to say at Pebble Beach earlier this year: “Not sure a golf shot should mean that much to you that you’re doing that after you hit it, like it’s just trying a little too hard. You have to try hard at golf, but that’s taking it to an extreme.”

But how about asking someone who’s actually had a front-row view of Choi’s wacky swing?

Prior to the tournament, Gonzo sounded sceptical, tweeting a video of Choi’s swing with a message that could certainly have been viewed as sarcastic: “18 holes of this tomorrow. And another 18 on Friday. Thank you @EuropeanTour @KenyaOpenGolf for the pairing, I owe you big time! #blessed.”

18 holes of this tomorrow. And another 18 on Friday. Thank you @EuropeanTour @KenyaOpenGolf for the pairing, I owe you big time! #blessed pic.twitter.com/awv42TznL7

So how did it pan out? After just four holes of his opening round, Fernandez-Castano was three-over-par. Oh dear.

Players used to love, and still do, being paired with Ernie Els as watching The Big Easy’s fluid rhythmical swing would rub off on them and feed into their own.

So was watching Choi’s bizarre antics off the tee somehow having an adverse effect on Fernandez-Castano? I caught up with GFC to find out:

Golf365: Looking at your scorecard on day one, you made bogeys at 2, 3 and 4. Were you too busy staring at him and it put you off?!

GFC: Kind of, yes! It’s funny but at first I was paying so much attention to his swing and his finish, that I kept forgetting about looking at his shot and learning from his ball flight. I had to wait for the crowd’s reaction to know if the shot was good or bad! It took me a while to get into my own game and try to beat him.

Golf365: What is your opinion on his swing? Is it a gimmick and would he do better if he just had a normal follow through?

GFC: I do like his swing. You can see he likes the show and he definitely exaggerates it when there is a big crowd around but I have to say his positions are pretty good overall. I think it’s great for the game to see something so different and funny at the same time. Kudos to him!

Golf365: Did you hear any comments from the crowd about his swing?

GGC: Every time he hit a shot you can hear the laughs in the background. It’s hard not to laugh, he is a showman!

Golf365: Did you chat to him about it and was he a nice guy?

GFC: You can tell he is a really nice guy, very polite who always acknowledges a good shot. Unfortunately, he doesn’t speak any English and neither does his caddie so it was impossible to have a conversation.

GFC: I’d love to play with him again. I think he is great for the game of golf. I’d definitely pay to watch him play.

So there we are. From a sceptic to a fan. After 36 holes in the company of Ho-sung Choi, Gonzo has been converted.

And I have too.

There’s no need to start wondering what he’s playing at because Choi has something much more important in mind when he steps onto a golf course.

Why are we drawn to YouTube videos of Choi? Because he’s different. Because he’s having fun. And perhaps some of his colleagues a little further up the world rankings should remember his outlook when they curse and fret over a missed three-foot par putt.

“My goal now is to travel the world playing golf and entertain all of the crowds as best as I can,” says Choi.

“All I want to do is make people happy.”

That’s what he’s playing at.