Golfer undone by leaf in cruellest of fashions 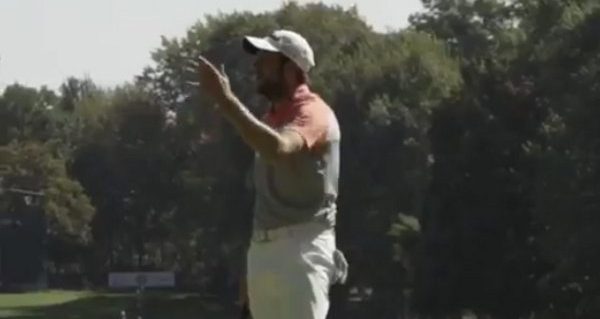 A golfer playing on the Web.com Tour may have been robbed of a PGA Tour card by a leaf blowing in the wind.

At the DAP Championship on Sunday, Southgate was closing in on earning his PGA Tour card in the Web.com Tour Finals, standing over a short putt for birdie on the 15th hole when this happened:

Golf is hard … especially when you're playing for a @PGATOUR card. ⛳️ pic.twitter.com/SoyWo6X01q

A gust of wind after he makes his putt send a tiny little leaf crashing into his ball and sending it off course, robbing him of a potential birdie.

But the story doesn’t end there, and in fact gets much, much worse.

You see, Southgate was actually entitled to replay his putt thanks to Rule 19-1, but being unaware of the ruling, he simply made his putt for par instead of replacing the ball and replaying the shot.

hurts more everytime i look at it!! https://t.co/rPSHXS0pBi

Jim Duncan, the Web.com’s vice president of rules and competitions, explained the situation to GOLF.com.

“Matthew’s putt was deflected by a leaf in motion and the putt was missed. Rule 19-1 requires for the stroke to be cancelled and replayed. Matthew proceeded to tap in his next putt and continued on with his round,” he said.

“The committee was made aware of the situation after Matthew signed his scorecard and prior to the close of competition.”

thats compulsary, so 2 shot pen for playing from wrong spot and 2 more for signing wrong score!! massive chin up!!

Southgate took the disappointment in his stride, but the reality is the five-shot swing on that hole dropped him to 20th in the Web.com Tour Finals standings, when he could have done so much better.

He will now need to avoid any further trouble at this week’s Web.com Tour Championship in order to remain in the top 25 of the standings and earn his PGA Tour card.