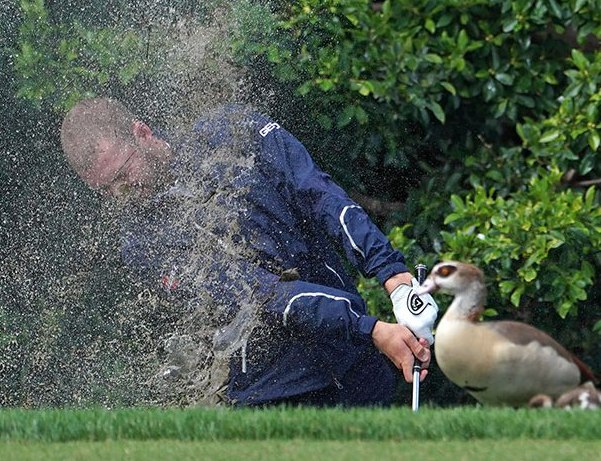 PGA National Golf Club in Palm Beach Gardens, Florida, is a challenging course at the best of times, but add strong winds and you have a recipe for a genuinely brutal test of golf.

That was precisely what the pros had to contend with during Thursday’s first round, and unsurprisingly only 20 players managing to finish under par after 18 holes.

Players were also finding themselves in some interesting positions around the course, as several hazards came terrifyingly into play.

Berger was one such player who found the water on the par-4 sixth. But rather than take the penalty, he decided to don a rain jacket and wade into the hazard to try and get out of trouble.

Well, he nearly lost his balance and got totally soaked, but the gamble paid off, as Berger managed to hack his way out of the wet and save par.

He would go on to record a superb 67 to tie for third place.

Rain jacket on ✅
Pants rolled up ✅
Shoes off ✅

Less fortunate was Brandt Snedeker, who not only picked a bad day to wear white, but needed three shots to get his ball out of the drink at the par-3 17th.

The end result? A triple-bogey six on the hole, and a four-over-par 74 total.