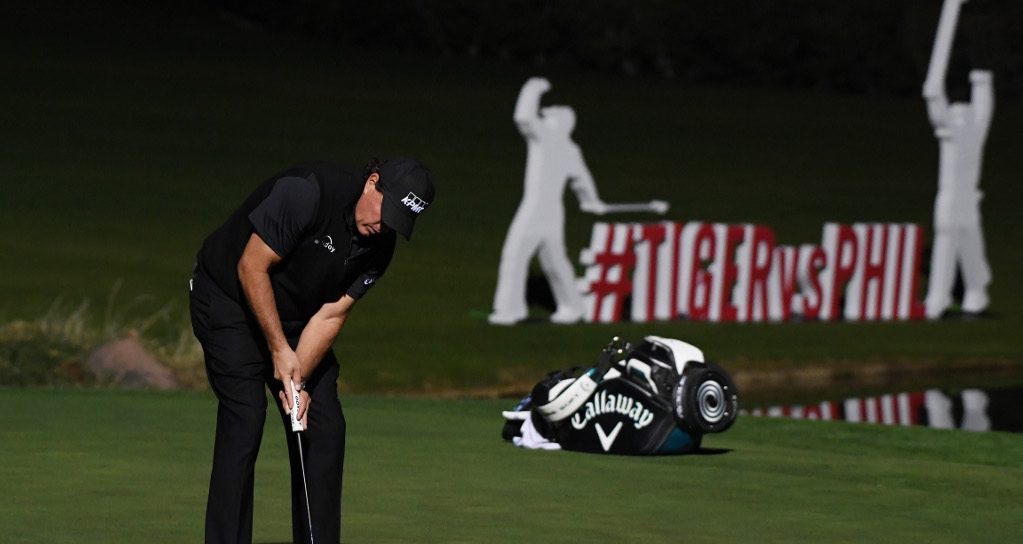 From excited pros to complaining fans – and vice versa – it seems everyone had an opinion on ‘The Match’ between Tiger Woods and Phil Mickelson.

The made-for-TV contest went down in Las Vegas on Friday, with Mickelson coming out on top on the fourth extra hole.

Good or bad, the pay-per-view event had everyone talking – including a number of PGA Tour pros, who seemed as divided in their opinion of the unfolding spectacle as the rest of us:

I’m purchasing only to watch @PhilMickelson lose 200k on the 1st hole….@TigerWoods, donate his 💰 wisely https://t.co/bDDeOUfvDx

This small talk is so painful to listen to. Contrived conversation bc they know the mics are always on. A commercial or two wouldn’t hurt.

Phil saying “Be the right one today” right off the club face on a closest to the pin for $100k pic.twitter.com/qd9vgD9Ehu

Phil is a hot putter away from being 6 up right now! Can’t give TW that many chances. Let’s hear the trash talking.. get pat perez out there to stir the pot 😂😂

Can we get Temper-Pedic to sponsor #TheMatch?? Bit of a pillow fight going right now haha I won’t these boys to play some golffff #letsgooo

The European Tour pros were mostly silent on the matter, although Englishman Eddie Pepperell certainly wasn’t afraid to offer his opinion of the event (spoiler: he’s not a fan):

Coming away from my Twitter ban just to take Georgie’s point further and conclude that this is indeed everything golf shouldn’t be doing right now. One man earning $9 Million isn’t attractive. This putrid attempt at attention will turn out to be futile for everyone. Pathetic. https://t.co/dTf3B4mimg

Tiger vs Phil is like Mayweather vs McGregor. Except on their day, there are 100 golfers who *could* beat Tiger/Phil. Not true of Boxing. When fewer people swallow bigger portions of the pie, inequality beckons. Not saying this is right or wrong, only that debt will fuck us all.

Many fans also complained about the heavy breathing being picked up Woods and especially Mickelson’s mics. ‘The Match’ was supposed to be all about banter and trash talk, but fans got a little more than they bargained for from the two veterans walking the course:

Loving the incessant breathing noises. Hope The Match II is in Denver.

is there a broadcast of #TheMatch that can be viewed WITHOUT the heavy nose breathing?

So far on the match, a lot of Phil breathing hard #TheMatch

The Match, Tiger vs. a heavy breathing dad getting winded on small inclines

All in all, an event to remember – for a whole host of reasons.