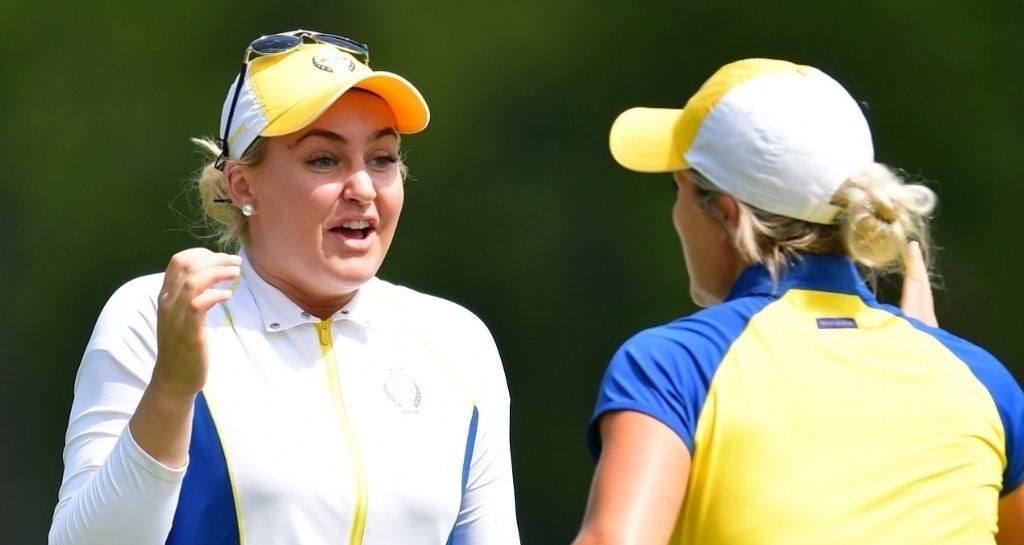 Europe opened up a one-point lead after Friday's morning foursomes on the opening day of the Solheim Cup in Des Moines, Iowa.

Annika Sorenstam's players lead 2½-1½ thanks to a strong finish from their final two pairings, Anna Nordqvist and Georgina Hall, and Karine Icher and Catriona Matthew.

The first match of the day between Europe's Melissa Reid and Charley Hull and US duo Cristie Kerr and Lexi Thompson was halved.

The European duo led for most of the match and were two-up with just two to play, but Kerr and Thompson fought back superbly to level the scores by winning both the 17th and 18th.

As it turned out, it was a hugely important result for the Americans, who would have been even further behind at the end of the session had they not rallied to square the match.

The only US victory of the morning went to Lizette Salas and Danielle Kang, who narrowly defeated Carlota Ciganda and Caroline Masson 1-up.

The Europeans had done well to erase a two-hole deficit by winning the 11th and 14th holes, but Salas and Kang retook the initiative with wins at the 15th and 16th.

Europe won the 17th hole to give themselves a chance of halving at the last, but the Americans hung on for the win.

A strong finish from Nordqvist and Hall saw them win the third match by a 3&1 margin.

Already 1-up through 15 holes after winning four holes to the Americans' three, further victories at the 16th and 17th brought the match to an early conclusion.

And Europe ensured the morning session belong to them as Icher and Matthew – a late replacement for the injured Suzann Pettersen – did their bit by holding on for a valuable 1-up win at the 18th hole over Stacy Lewis and Gerina Piller in the final match.

The American duo held a two-hole lead after five holes, but the Europeans went on a late charge, winning three holes during a four-hole stretch from the 13th to emerge victorious and hand their side an all-important 1-point lead midway through the first day of competition.