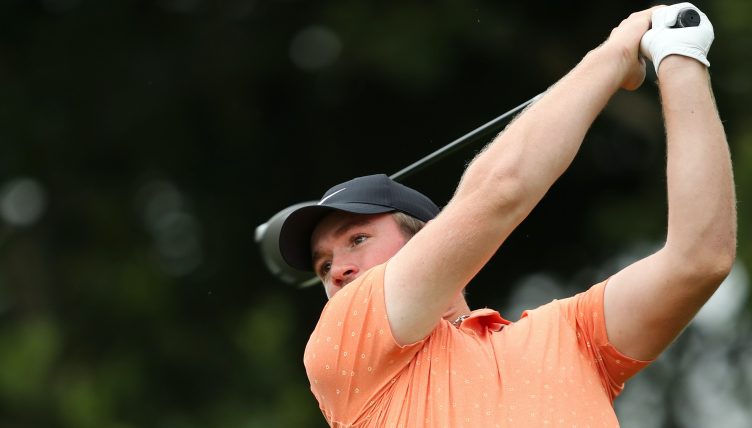 England’s Sam Horsfield is in pole position to claim his second European Tour title in the space of three weeks after a roller-coaster finish to day two of the Celtic Classic.

Horsfield, who won the Hero Open at Hanbury Manor a fortnight ago, holed a bunker shot for a birdie on the 16th, ran up a triple bogey on the 17th and then eagled the last at Celtic Manor in a second round of 64.

At 11 under par, the Florida-based 23-year-old holds a one-shot lead over Belgium’s Thomas Pieters, with Andrew Johnston, Callum Shinkwin and Thomas Detry another stroke adrift on nine under.

Speaking about his five-wood approach to the 18th, Horsfield said: “It’s funny, we had the exact same number into 17 at Forest of Arden when I won so I hit the exact same shot and made the putt for eagle.

“The 17th was not great but I bounced back after that triple to get myself into a good position for tomorrow. I’ve been in contention, I know what the feelings are like and I’m really looking forward to it.”

Overnight leader Pieters, who is playing his first event for five months due to the coronavirus pandemic and the birth of his first child in July, added a 68 to his opening 64 despite finding the water with his approach to the 18th.

Johnston recovered from a nightmare start to his second round to add a 66 to his opening 67 thanks to a blistering finish at the 2010 Ryder Cup venue.

The 31-year-old ran up a triple-bogey seven on the first and dropped another shot on the fifth, but then birdied three of the next four holes and covered the back nine in just 29 shots with an eagle and four more birdies.

“Yesterday (Thursday) evening I wasn’t happy the way I was hitting the ball, spent an hour and a half on the range and just said to myself, ‘I’ve tried everything let’s just play and see what happens,'” Johnston said.

“If I play good, great, if I don’t so be it. I know I’m doing the right things, it’s just a matter of patience that just freed me up and let me play.

“It’s still not quite right. Sometimes you can not play your best and score really well but I don’t want to rest on that, I want to improve on the weekend with my ball-striking.”

Shinkwin, who collapsed to a closing 81 in the English Championship on Sunday, carded seven birdies and one bogey in a 65 and said: “I’m very happy to be fair.

“I had a bit of a bad round last week on the Sunday and my game just went wrong. I had a couple of days off to recover and on Wednesday I was just working hard on my game. I did everything that I needed to do correctly, everything went right and I didn’t really make any poor swings either.”