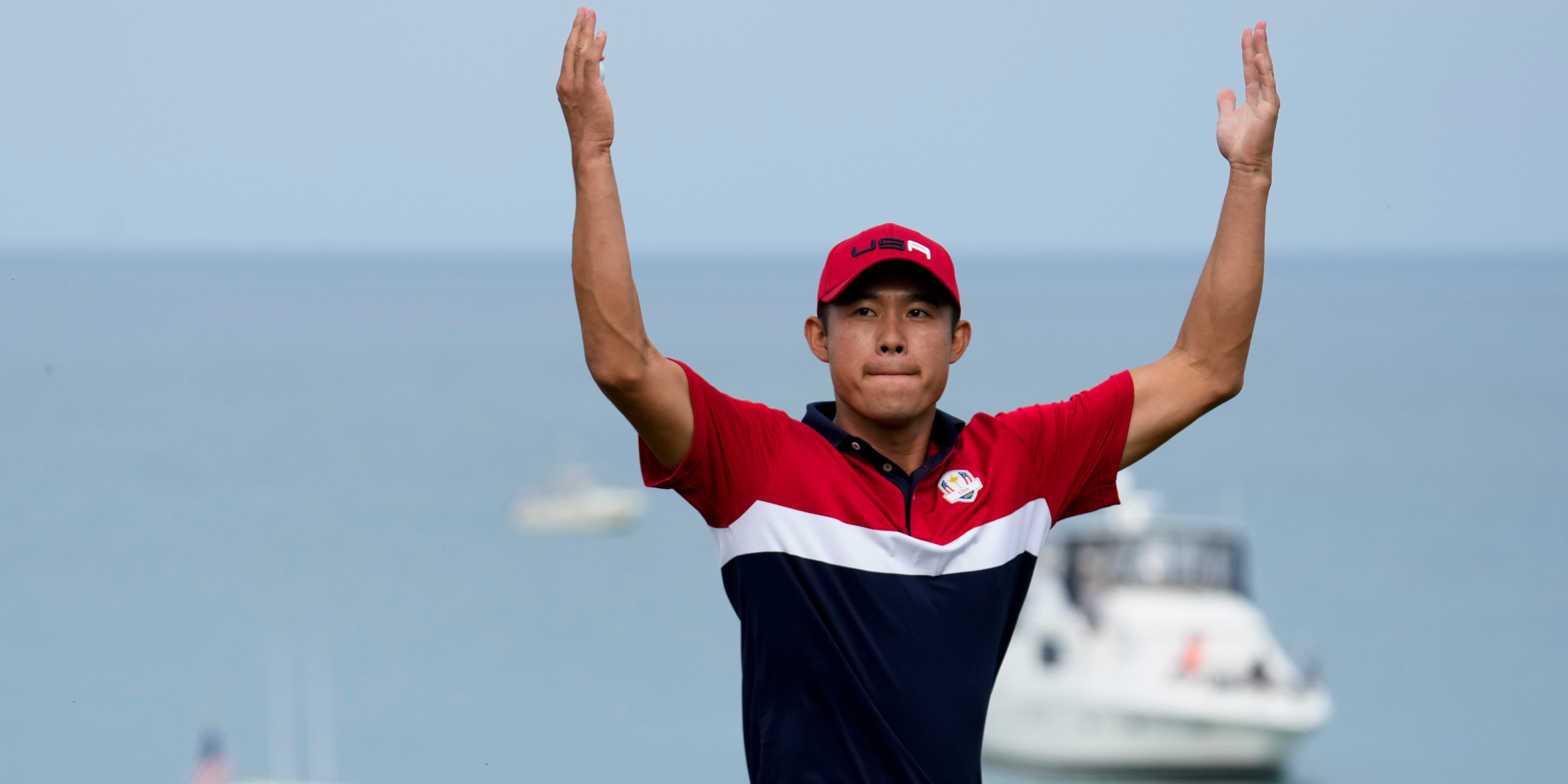 An emotional Rory McIlroy was reduced to tears as the United States regained the Ryder Cup with a record-breaking performance at Whistling Straits.

But, although McIlroy belatedly found some form to beat Xander Schauffele in the opening match, the scoreboard was soon a sea of American red as Steve Stricker’s side stormed to an utterly dominant 19-9 victory, the biggest winning margin in the modern era.

The writing had been on the wall over the first two days of American dominance and victories for Scottie Scheffler over the previously unbeaten Jon Rahm and Patrick Cantlay against Shane Lowry took them to the brink of victory.

Bryson DeChambeau, who eagled the first hole after driving the green, ended Sergio Garcia’s unbeaten record with a 3 and 2 victory to make it 14-6 and it fell to Collin Morikawa to effectively secure victory with eight matches still on the course.

The Open champion’s birdie on the 17th guaranteed him half a point against Viktor Hovland – subsequently confirmed on the last – and the home celebrations, which Justin Thomas had started by downing beer on the first tee on Saturday afternoon, could officially begin.

World number two Dustin Johnson’s victory over Paul Casey made him the first American player to compile a perfect 5-0 record since Larry Nelson in 1981, while there were also wins for Brooks Koepka, Thomas and Daniel Berger.

Ian Poulter maintained his proud unbeaten singles record with a 3 and 2 win over Tony Finau and Lee Westwood beat Harris English, while Tommy Fleetwood halved his match with Jordan Spieth.

Matt Fitzpatrick looked set to halve his match with Berger and ensure the winning margin only equalled the previous best of nine points, only to dump his approach to the 18th into Seven Mile Creek in front of the green.

“We are disappointed but the US played well,” Harrington said. “They outplayed us, they were a strong team that got their plan right and got some momentum going. We always knew it was going to be a tall order.”

Asked if he regretted any of his decisions, Harrington added: “No, that’s the one thing that I have. I’m very comfortable with all the decisions. It’s a small consolation but it is one.”

McIlroy had been benched for the first time in his Ryder Cup career after two defeats on the opening day and lost again on Saturday afternoon, but birdied the first hole against Olympic champion Schauffele and was never headed.

Asked to describe the challenge of playing in front of the partisan crowd, McIlroy struggled to compose himself before saying: “I love being a part of this team and I wish I could have done more for them this week.

“I’m glad I put a point on the board for them but I just can’t wait to get another shot at this.”

McIlroy, who famously described the Ryder Cup as an “exhibition” before making his debut at Celtic Manor in 2010, added: “I’ve never cried about what I’ve done as an individual, I couldn’t give a s***.

“It’s been a tough week but the more and more I play in this event I realise it’s the best event in golf bar none. No matter what happens after this I am proud of every single one of the players that played this week, I am proud of our captain and vice-captains.”

Rahm had been in brilliant form over the first two days, partnering Garcia to three wins and also halving his match alongside Tyrrell Hatton, but ran into an inspired Scheffler who birdied the first four holes and never eased up.

Lowry briefly led against FedEx Cup winner Cantlay but never recovered from losing the fourth, fifth and sixth and eventually lost 4 and 2.

Cantlay was one of six rookies on the US team and warned Europe that the new generation of American stars would provide stiff opposition for years to come.

“This is definitely different,” Cantlay said. “I woke up this morning and I was trying to tell the guys, let’s get to 20 points because this is going to be the next era of Ryder Cup team for the US side.

“We have a lot of young guys and I think they are going to be on teams for a long time and I wanted to send a message.

“I think the young guys on this team get along really well. Everybody gets along. The atmosphere is light but I know everyone has that killer instinct and we are going to bring that to future cups.”

Victorious captain Stricker praised his side for making the journey to Whistling Straits for practice rounds a fortnight ago and even suggested their unity extended to the feuding DeChambeau and Koepka.

“They had a mission this week and you could tell, they played great and they came together”, Stricker said. “I mean, Brooks and Bryson wanted to play together, that’s how much it came together. That shows a lot about this whole team.

“From day one, it was about out-preparing (Europe), right, getting the guys here, getting them on the same page. This is a new era for USA golf. They are young. They come with a lot of passion, a lot of energy, a lot of game. They are just so good.”