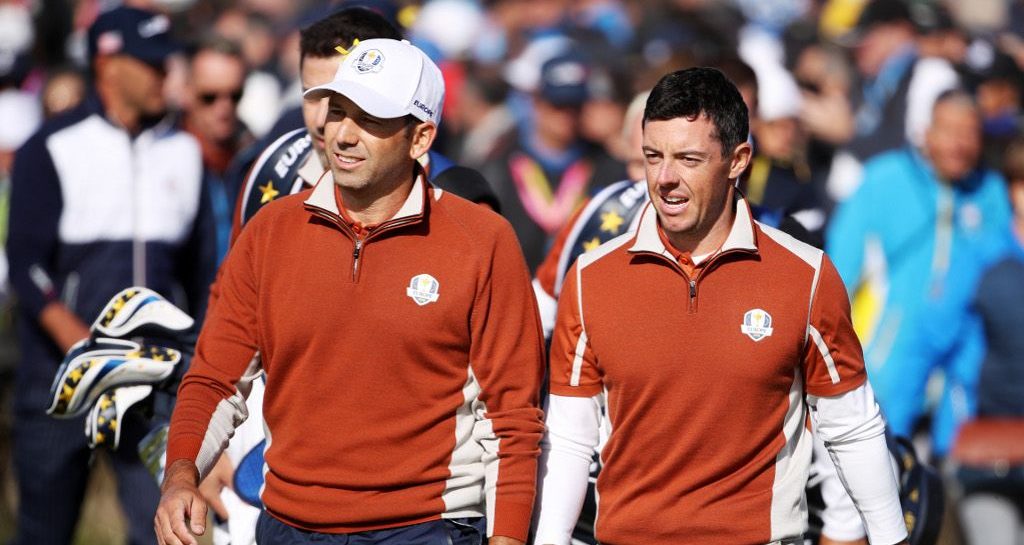 Rory McIlroy will face Justin Thomas in the opening match of the Ryder Cup Sunday singles at Le Golf National.

Europe lead 10-6, meaning they need just 4.5 points out of the 12 on offer on Sunday in order to reclaim the trophy they surrendered to the Americans at Hazeltine two years ago.

If the USA are to come from behind and win, they will need to equal the highest final-day comeback in Ryder Cup history.

McIlroy is no stranger to heading out first on Sunday. He did the same two years ago against Patrick Reed, a match he went on to lose, albeit after a thrilling battle.

"We need to go out there and play hard."

Furyk has opted to spread out his big guns across the day, although three-time major champion Brooks Koepka does head out immediately in the second match against Paul Casey.

Justin Rose then takes on Webb Simpson, before Tiger Woods enters the fray against Jon Rahm, a potentially mouthwatering clash, with Tiger obviously hurting after going 0-3 over the first two days.

The first of Europe’s record-breaking pair, Tommy Fleetwood, then heads out to take on Tony Finau.

Ian Poulter has been paired against World No 1 Dustin Johnson, while rookie Thorbjorn Olesen has been tasked with trying to contain an in-form Jordan Spieth, a point Bjorn almost looks to be surrendering.

Sergio Garcia takes on Rickie Fowler, with a chance to become Europe’s all-time leading points scorer if he wins, before record-breaker No 2 Francesco Molinari goes head-to-head with Phil Mickelson.

Heading out in the final match for Europe is Alex Noren, who will take on Bryson DeChambeau.