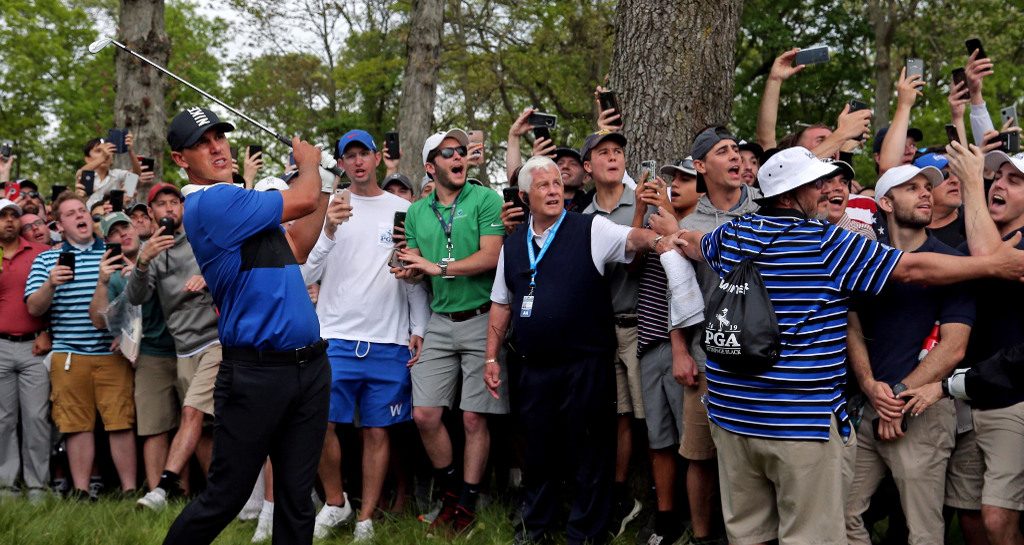 Brooks Koepka reckons the Europeans are going to need all the luck they can get with the fans when Bethpage hosts the Ryder Cup in 2024.

Koepka, who successfully defended the PGA Championship at Bethpage on Sunday to clinch his fourth major trophy, not only had to deal with the testing course conditions during his final round, he also had to cope with the raucous and highly partisan crowd, who turned against him in favour of Dustin Johnson as his form deserted him on the back nine.

Indeed, there was no shortage of loud cheers, jeers and one-liners during the entirety of the PGA Championship, much of it aimed at American players too, so Koepka shudders to think how the Europeans will be received when Bethpage hosts the 45th edition of the Ryder Cup in 2024.

“I’ve been to sporting events in New York. I know how it goes,” said Koepka.

“Good luck to Europe with the fans. I can’t wait to play [the Ryder Cup]. I hope I’m on the team. If not, I just want to be here.

The fans at Bethpage could not care less that Phil is 20+ back.

Many of the Europeans in the field got a taste of what they were in for, of course, and when asked what he thought the crowd would be like in 2024, Rory McIlroy simply offered a “no comment”.

Matt Wallace, who finished joint-third on Sunday, said: “The British fans were amazing last week. And then obviously the American fans here are rooting for their own. But that was crazy out there today. There were so many cheers and roars going on that you kind of knew what was happening. DJ is making a run at it.”

Fellow Englishman Paul Casey said: “I can’t imagine what a Ryder Cup will be like around here. I think it would be intimidating, no doubt. It’s like a 13th man for the US Team, big advantage.”

American Rickie Fowler played down the impact the crowds will have, however, saying the European players know how to deal with the intimidation factor.

“I don’t see them coming in afraid,” he said. “They know what they are going to face here with the crowds. They have all the momentum and confidence going in, but we have a little bit of time ahead of us to see if we can change that.”

Meanwhile, Tony Finau and Dustin Johnson both said they couldn’t wait to have the New York supporters behind them in 2024.

“I think it’s going to be an incredible venue,” said Finau. “More so the fans have been great. They’ve been great for me this week. I feel like I’m playing like a home event, which is really cool. I think the fans are going to bring something to the table and New York fans are some of the best in the world.”

“I love the fans up here,” said Johnson. “They’ve always been really good to me. Yeah, I love them. You definitely don’t want to be on their bad side, though.”