Harrington: I know I’m putting my career on the line 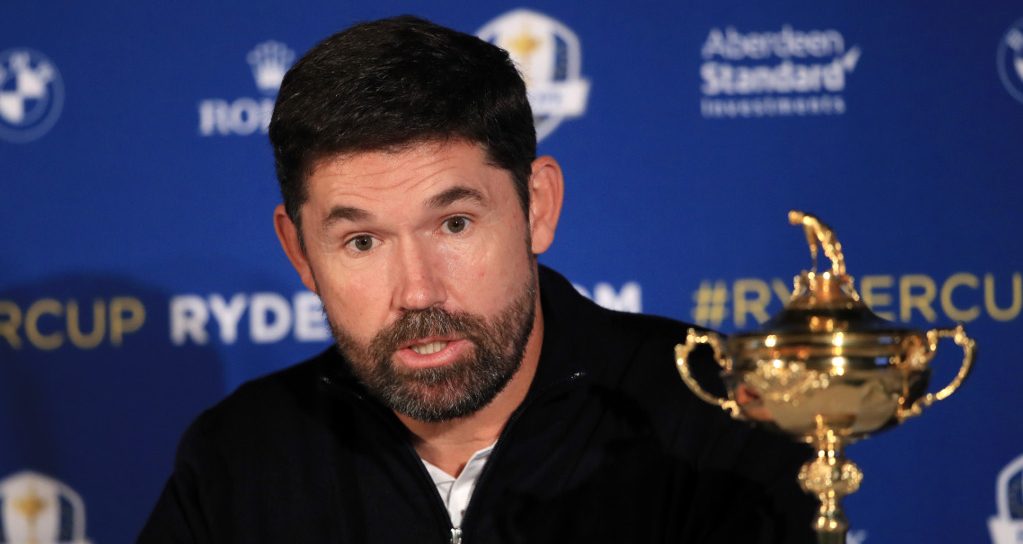 Padraig Harrington admitted he thought long and hard about taking on the challenge of captaining Europe’s Ryder Cup team in the USA next year.

The Irishman was officially named European captain for the 2020 competition at Whistling Straits, and made no bones about the fact that he is putting his reputation on the line.

Harrington has enjoyed a highly successful playing career, capturing three major championship title along with 28 other professional victories around the world, and has also made six Ryder Cup appearances as a player and a further three as a vice-captain.

But while the step up to captain is a natural progression for him, Harrington knows there is almost just as much to lose by accepting the role as what there is to gain.

With Europe having enjoyed so much success in recent Ryder Cups, he is well aware that failure – even away from home – will be judged harshly.

“It seems to be the right time and place for me in my career and in the Ryder Cup profile of other players and whose turn it is,” Harrington told the media during his unveiling at Wentworth. “But just because it seems like it’s my turn, it’s not just something I walked into.

Starting to settle down after all the media today. Delighted to be given the opportunity to captain the European Ryder Cup team in 2020 at Whistling Straits. Exciting times ahead. #TeamEurope

“It’s something I did think long and hard about. It’s possibly easier to be a Ryder Cup captain at home, but I realised it was good timing in my career and that it probably was the best chance for me in an international setting going to the US, having me as their captain at this time.

“So I felt it was the right time for me to go for it, and, when you talk to the other players, I certainly have their support. When I talked to the other vice-captains and potential captains going forward, it seemed to fit very nicely that I go and do the away match.

“Then it really came down to whether I wanted to be in the hat and put what is a successful career on the line, because you are putting it on the line when you become Ryder Cup captain. It is a different element to your career.

Congrats to Padraig – no doubt he will have us well prepared for the huge challenge of winning away from home. The exam will probably be one of stiff breezes on a course reminiscent to many in Europe with rolling fairways / greens and fescue grasses https://t.co/yDDtC0gQr2

“We know a successful captain is great, and a losing captain, you know, it’s his fault. I am putting something on the line going out there. But once I decided that I wanted to take that chance, put myself out there, I think then it was just making sure that the European Tour and the PGA both decided I was the right man, too.”

What ultimately made Harrington decide to accept the role was the confidence in his own abilities, and his extensive Ryder Cup appearance both as a player and a vice-captain, during which time he was able to take a lot from the way other European captains went about the job.

“Obviously I’m thrilled to be named as Ryder Cup captain for 2020,” he added. “I really want to be a help, and I want to hopefully leave the Ryder Cup and the European Tour in a better place after two years. It’s going to take a great deal of my time over the next 18 months, figuring out how can I make our team play to the best of their ability.

“We’ve had some great captains over the last number of years, and I suppose I’ve learned from all of them. I’ve probably learnt more as vice-captain than you do as a player, and the difference is amazing. As a player, you’re very one-dimensional with doing your thing and getting on and performing, but as a vice-captain, you definitely see more.

“It is daunting because you want to do a good job, you want to add to the Ryder Cup, and Thomas has left us in a very strong place. He did a great job, and all the captains I’ve played under or was vice-captain, I’ve learned from every one of them and I will try to bring all that together.

“Hopefully I will pull it together and say the right things at the right time, and hopefully get a team and get the best out of that team that provide a winning performance.”