Fleetwood and Molinari make history as Europe remain in control 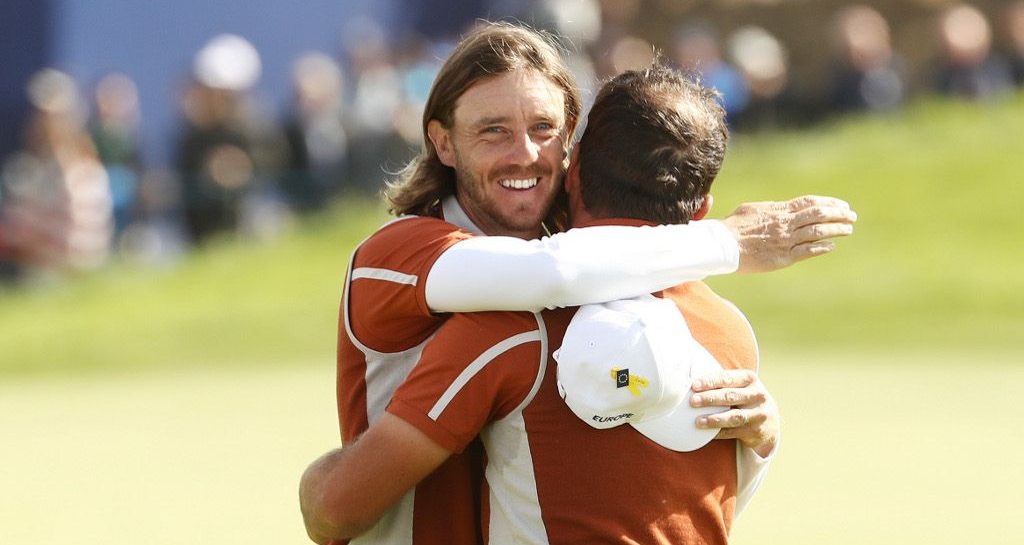 While the Americans showed some fight in the foursomes, Team Europe still ended the second day of the 42nd Ryder Cup at Le Golf National well on top – thanks in no small part to the record-setting efforts of Tommy Fleetwood and Francesco Molinari.

While Jordan Spieth and Justin Thomas returned to the party for the visitors, Fleetwood and Molinari became the first European pairing in history to win all four matches.

After falling a hefty four points behind following a 3-1 loss in the morning fourballs, Jim Furyk’s men desperately needed to stop the rot in the afternoon.

Ultimately, they were able to win two of the four foursomes matches and share the points with Europe, who also won two.

But while the Americans may have avoided falling any further behind, they also weren’t able to make any inroads into the deficit, and the end result was a valuable 10-6 lead for Europe heading into the final day.

"We need to go out there and play hard."

That means Thomas Bjorn’s side need just 4.5 points from the 12 on offer in Sunday’s singles matches in order to take back the trophy they surrendered at Hazeltine two years ago.

Most of the matches in Paris this week have been very one-sided one way or the other, but the contest between European pair Henrik Stenson and Justin Rose, and US duo Dustin Johnson and Brooks Koepka, was a rare close affair.

The two teams traded blows throughout, but Stenson and Rose were able to hang on and clinch a thrilling 2&1 victory, despite a late fightback from the Americans.

Sergio Garcia came into his match with Alex Noren boasting two wins out of two, but on this occasion he and Noren found themselves well beaten by Bubba Watson and Webb Simpson, who wrapped up a 3&2 win on the 16th hole.

Watson and Simpson got red hot early on, winning five of the first eight holes, and Garcia and Noren were never able to catch up, despite a better showing on the back nine.

Few could have predicted that the partnership of Molinari and Fleetwood would combine for a historic 4-0 record over the opening two days of competition, but they turned out to be Bjorn’s most potent secret weapon.

The moment Fleetwood & Molinari found out they were the first European pairing in history to win four matches in a Ryder Cup…#TeamEurope pic.twitter.com/5ehXyJSfIe

With two fourballs and a foursomes victory behind them, they returned on Saturday afternoon to hand poor Tiger Woods – this time partnered with Bryson DeChambeau – his third straight defeat.

Molinari and Fleetwood won the first, third, sixth, eighth and ninth holes to find themselves 5-up at the turn. Woods and DeChambeau tried to mount a fightback by winning the 10th and 11th holes, but their gains were soon erased as the Europeans won the 12th and 14th to wrap up a 5&4 win.

The US team were able to minimize the damage in the final match of the day, however, as young guns Spieth and Thomas handed Ian Poulter and Rory McIlroy a 4&3 defeat.

Poulter and McIlroy were 2-up after two holes but failed to win another hole as Spieth and Thomas took control of the match, ultimately cruising to victory.

JT and Spieth take it 4&3. A big point for the United States.#GoUSA pic.twitter.com/n0nm8LOZsq

Bjorn’s men find themselves in a very strong position heading into Sunday’s singles matches, but the US team is certainly capable of turning the tables – particularly in the one-on-one battles, which they tend to do better in.

All will be revealed on Sunday.