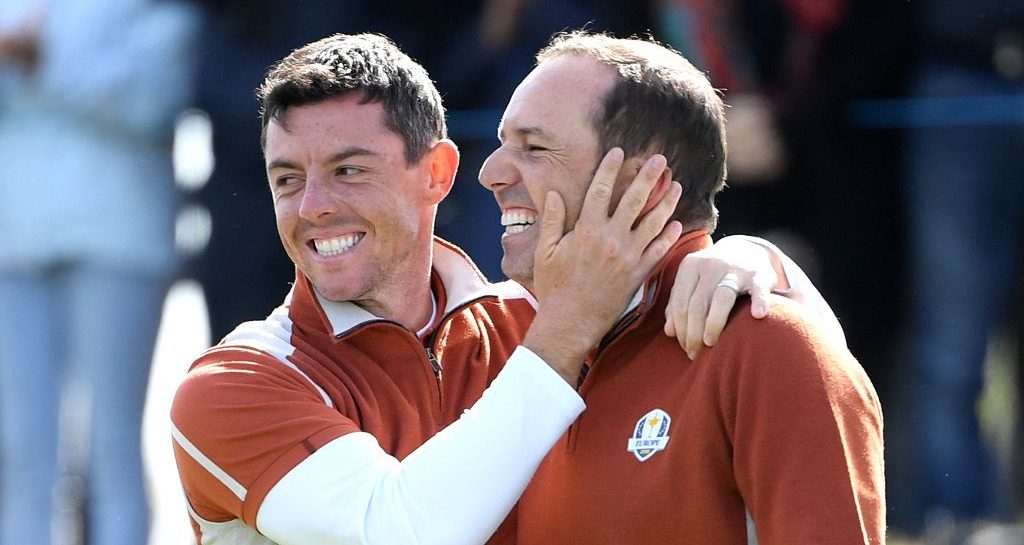 Europe continued their red hot form in the Ryder Cup as the won three out of the four fourball matches at Le Golf National on Saturday.

It was all beanies and puffer jackets on a chilly morning in Paris, but the breeze was not as cold as the American’s putters, as Team USA suffered through a period where putts just failed to drop.

Rory McIlroy and Sergio Garcia teamed up for a 2&1 victory over Ryder Cup rookie Tony Finau and Brooks Koepka to take Europe to six points. Finau was the victim of a cold putter, missing a number of putts early on to halve, leaving Europe four ahead after eight holes.

But the Americans battled back and after Garcia and McIlroy both found the water on the 15th, there was pressure building. The pair relied on some clutch long-range putts on the 17th sealed the win for Europe.

Just minutes after, Paul Casey and Tyrrell Hatton beat world number one Dustin Johnson and Rickie Fowler 3&2. Casey was in particularly good form on the greens, rolling in five birdies in the opening eight holes.

Francesco Molinari and Tommy Fleetwood – a group dubbed ‘Mollywood’ – made it eight points in a row for Europe when they defeated Patrick Reed and Tiger Woods 4&3.

Reed struggled all day, often taking the scenic route through the Parisian shrubbery, leaving a deflated looking Woods to play on his own. Despite this, the pairing were even when they stepped on the 11th tee.

However, buoyed by the European crowd, ‘Mollywood’ birdied four out of the next five holes to cruise to victory.

Woods – who has played in eight out of the last nine weeks – was picked the to play in the afternoon foursomes by Team USA captain Jim Furyk with rookie Bryson DeChambeau.

Childhood friends Jordan Spieth and Justin Thomas finally provided some much needed relief for USA, edging Ian Poulter and Jon Rahm 2&1 in a tense match that swayed this way and that.

Spieth – who played the entire round in a USA beanie – rolled in a 20 footer to win the 11th, cuing chants of “USA, USA” from the gallery, leaving them 2up. Finally, Thomas would roll in a tricky six footer for birdie on the 17th to seal a fourth point for America.

JT closes out the match👊

Justin and Jordan win 2&1 against Poulter and Rahm. pic.twitter.com/bTiM8hJzfn

The victorious duo will stay together for the afternoon, where they face Poulter and McIlroy in the foursomes.