Golf365 review: Royal Portrush and so much more in Northern Ireland

Golf365’s Andrew Swires was invited to take on the Royal Portrush course that will play host to The Open in 2019 – and also got to sample some more of Northern Ireland’s golfing gems.

There can be no doubt that the R&A have made a very sound decision in taking the Open Championship to Royal Portrush in 2019.

This magnificent course provided the climax of a three-day visit to Northern Ireland, organised by Tourism Ireland, in which I and 12 colleagues from the media sampled the hospitality, sights, sounds and stunning golf this country has to offer. 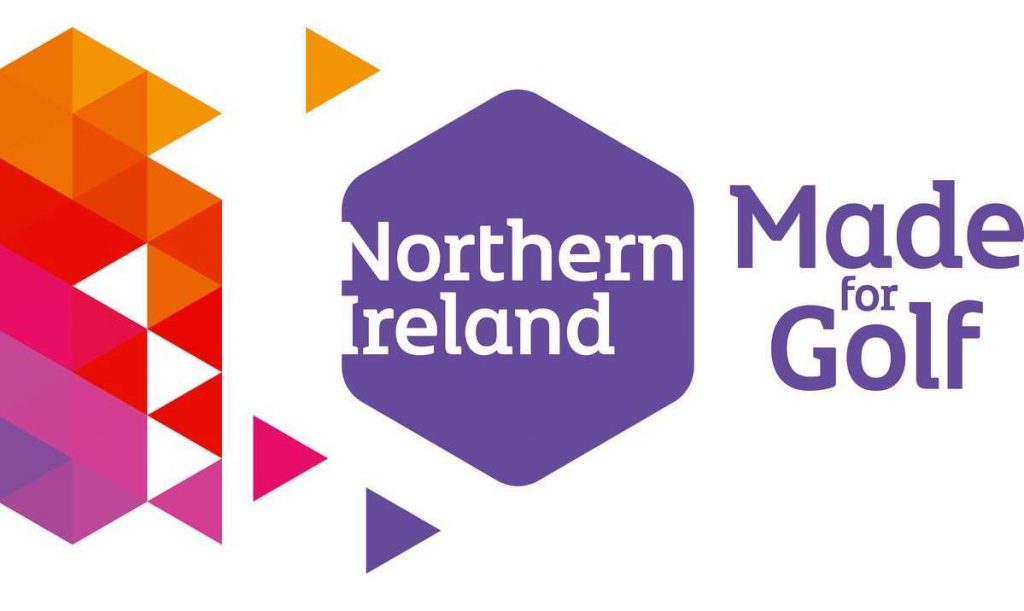 On leaving Leeds I had a very limited inkling of what was in store, so my expectations were not particularly high. The next three days captured in this review were to change all that.

We only sampled three but the country has over 100 courses to choose from, of which spectacular links along the Atlantic coast make up a significant percentage. My first taste of Northern Ireland golf would be at Castlerock, Portstewart and as sighter for The Open, Royal Portrush.

Day 1 – Belfast
Ahead of the golf our journey began in Belfast where our guide introduced us to a few of the many attractions this city has to offer including; the award-winning Titanic Museum, “Game of Thrones” (a favourite of mine) main studio and the home of C.S. Lewis. I left the city boundary thinking a follow-up weekend break will be needed to explore in more detail.

Day 1 – Castlerock
Leaving Belfast, we joined the Antrim Coast Road en route to Castlerock, the venue for our opening 18 holes. A challenging start to the week as the “Mussenden Links” provided a test of driving accuracy and precision approach play. Awarded Ireland’s “Hidden Gem” for Links Golf on the North Coast, some holes will stay long in the memory. The par 3 “Leg o Mutton” hole features a railway line to the right, a meandering burn to the left and a raised green bordered by a cavernous bunker waiting for your ball, should you miss the water and the tracks. Having somehow missed the trouble, I managed to walk of this green with a 3, a fine result.

If time is short or the legs ache and your happy with 9 holes, then the Bann course provides a fantastic alternative. Equally attractive, but slightly less demanding it includes a par 5 (5th hole), many believe to be one of the most picturesque holes in Ireland. 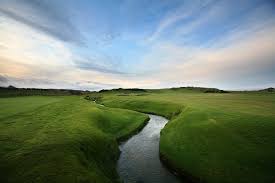 Day 1 – Bushmills Inn
Restored to full strength courtesy of the “black stuff” in the Castlerock bar, our journey continued to the award-winning Bushmills Inn, our home for the three-night stay. Situated very close (within 50 yards) to the famous Bushmills distillery, the Inn is a perfect venue for the visitor looking for a warm and friendly welcome delivered in grand surroundings. Spacious, comfortable, luxury rooms with all the extras 4-Star accommodation is expected to offer and more, the Bushmills reached even greater heights in the bars and dining rooms, where the beers, wines, breakfasts and evening meal were outstanding. Fresh local produce, superbly cooked and served with enthusiasm were well received by our party pre and post action on the course.

Day 2 – Portstewart
Day 2 had us away early, replete with the Bushmills “Irish Fry” and en route to Portstewart. Following the Antrim Coastal road is a delight, taking in the spectacular Atlantic coast line and bustling seaside towns. On the route is the very well preserved Dunluce Castle and of interest to the many “Throneys” on the trip locations used in making the series, including Ballintoy Harbour alias “Iron Islands”, home to the evil “Theon Greyjoy” and the Portstewart Strand which became the beach where “Jamie Lannister” landed at “Dorn”.

Portstewart Golf Club mirrored the scenery viewed on route. Set on the Causeway Coast this is surely one of Ireland’s gems. Three courses to choose from including the “Old” and “Riverside”, but it is the famous “Strand” course which has elevated Portstewart to the forefront of golf destinations. The front 9 on the “Strand” are viewed as one of the great opening 9s in the World. I would not argue with that. Holes taking in views of the Atlantic, the Donegal hills and the River Bann are sculptured into valleys bordered by towering dunes. The course twists and turns from tees to greens, providing as we all found out a thorough examination of our games.

The wind was up and my game was not quite up to the task, but no matter any disappointment was completely off-set by the beautiful experience of walking this course.

Portstewart’s Strand Course was the venue for the Dubai Duty Free Irish Open in 2017 and it is easy to see why the winner Jon Rahm was as impressed as our party, saying: “The golf course is amazing, it’s probably one of the most beautiful golf courses I have ever seen.”

Portstewart is a “must visit” if you love Links golf and the unique challenges the weather and sensational topography a course like this can provide. 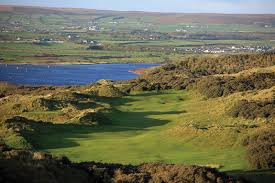 With two thorough golf examinations complete, our hosts deemed some rest and Irish hospitality appropriate. With this in mind we routed to Ballymena to sample the delights of Galgorm Resort & Spa and specifically their magnificent Gin Library where over 400 varieties including some very rare examples are displayed. Not enough time to sample them all but we did manage a few.

Set in 163 acres of park land with the river Maine running through its grounds, Galgorm Resort & Spa is one of Ireland’s finest hotels. Idyllic surroundings are just the starting point for a venue which with great imagination and style gives guests all that a Spa resort can offer to the highest possible standards. Partnering with the local Galgorm Castle Golf Club, the resort hosts the Northern Ireland Open each year, showcasing to an extended audience this superb destination for sport and relaxation. Culinary excellence is a given here with a selection of restaurants including the 3AA Rosette “River Room” to choose from. Post gin tasting, we transferred to the golf club to dine in the recently opened “Castle & Kitchen”. I was not disappointed when sampling their charcoal grill delights. 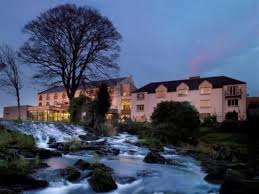 Day 3 – Royal Portrush
Our final day in Northern Ireland provided the showpiece of the visit, as we had the honour of playing the Open venue for 2019, Royal Portrush. Over 130 years old, this Club – and the busy seaside town which hosts it – will ensure a memorable renewal of the battle for the “Claret Jug”.

Royal Portrush has two courses but The Open (back to Northern Ireland and Royal Portrush for the first time since 1951) will be staged on the fantastic “Dunluce” course. As a first-time visitor I knew ahead of walking to the first tee that this was going to be special. The warm welcome and the regal nature of the grand old clubhouse set the tone for the splendour of the sport to follow.

Up there as one of the World’s great Links, Royal Portrush was a joy to play. Demanding holes immaculately designed to test all parts of the golfer’s game set in breath taking scenery.

The views across the North Atlantic to Donegal and Scotland were never far away and the rolling nature of dunes surrounding manicured fairways, ”proper” bunkers and pristine greens made this course one I will not forget. Whilst I might favour the par 5 2nd as I managed an improbable “birdie”, the 5th – a risk-reward par 4 – probably takes the accolade as the most stunning hole. A tee shot over a significant carry (for those taking on the green) sets up a second shot which if slightly long will find the ocean. Another “birdie” or even a par was too much to expect, but I avoided the Atlantic so finished the hole with the ball I started it with.

The 5th may take the beauty accolade but there is little doubt that the 16th, named “Calamity”, will provide the most drama when the world’s elite players take to the course next July. A dramatic par 3 over a gaping ravine will require length and precision from the Open tee. If the wind blows there could be some dramatic changes to leaderboard here over the four days. 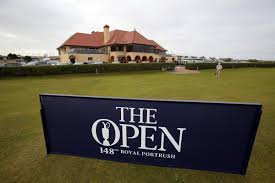 Day 3 – Giant’s Causeway
Playing Royal Portrush was a fitting climax to the golf we had the pleasure of sampling in Northern Ireland. We could not, however, leave this iconic venue without taking in some Guinness to celebrate the day (and the results for those in the prizes) and it did not disappoint. I still don’t understand why this drink is so much better in Ireland!

Leaving Portrush we moved on to one of the region’s most famous natural attractions. The “Giants Causeway” is a remarkable, spectacular and unique piece of natural architecture which until seen close-up is hard to imagine. Our guided tour (using visitor centre provided headsets) was as informative as it was dramatic. A word of warning, it’s rugged terrain with the Atlantic very close so be careful on the Causeway if you have taken a drop of the “black stuff”. 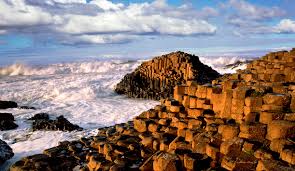 Day 3 – Last Supper
Our visit to Northern Ireland was very much about golf and the build-up to The Open in 2019, however it was also an opportunity to take in much more that this part of the UK has to offer. These additional goodies reached a peak for us when we were invited to sample County Antrim produce through a five-course dinner at the Distillers Arms, “tartine” restaurant.

The chef left us in no doubt that food is a very important part of Northern Ireland’s way of life and the experience it is looking to offer visitors. This meal captured the emphasis on locally-produced quality ingredients (fish, meat, vegetables) and supporting beverages (whiskey, gin, beers). A great way to end the week as we looked back on 54 holes of golf on great courses set in a beautiful part of the World.

Days 1-3 – Final Thoughts
These three days taught me that Northern Ireland is a great destination for the golfer and that it has much more to offer for those who love the game and those who don’t.

Outstanding scenery, new and historic attractions, great hospitality in quality accommodation and superb cuisine add up to a great package.

The Open will be a great success (already sold out) and those fortunate enough to have tickets will enjoy fine sport and a great experience. Those without tickets (like me) should take the clubs across the Irish Sea before and/or after The Open and discover why Northern Ireland is a “must visit”.

You can check out Discover Ireland’s Facebook’s page here, and follow @GoToIrelandGB,  @DiscoverirelandGB and @TourismIreland on Twitter.

To plan your golfing break in Northern Ireland, visit this site.