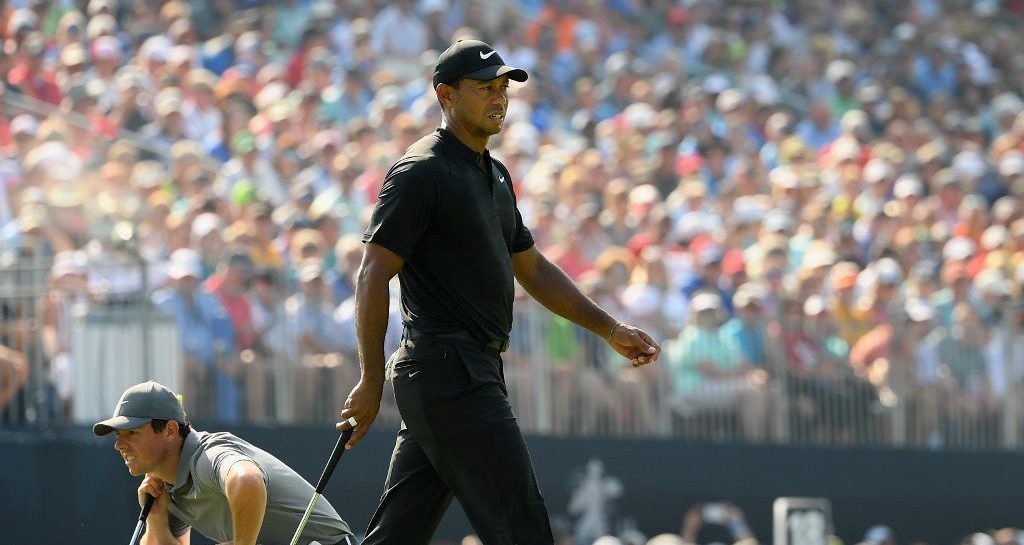 Tiger Woods struggled to make a morning charge as the rain-delayed second round of the PGA Championship wrapped up on Saturday.

Woods made three front-nine birdies before play was suspended on Friday, but failed to capitalise on that start when play resumed.

While he was able to open up with a birdie at the par-5 eighth, a bogey-birdie-bogey start to the back nine saw him pegged back.

Woods did recover with a birdie at the par-5 17th to sign for a more-than-respectable 66, although he would have been hoping for more.

As it stands, he lies on four under par heading into the weekend, six shots behind leader Gary Woodland.

The best shots from an entertaining Saturday morning in St. Louis …

Woods’ playing partner Rory McIlroy fared better, adding three birdies for a 67, but it still only leaves him on three under, seven back.

Also resuming his round on Saturday morning was Rickie Fowler, who played his last seven holes in one under to sign for a 67 and move to eight under, just two behind the leader.

Irishman Shane Lowry also impressed, adding three more birdies upon resumption to the three he made on Friday to shoot an impressive 64 and move to seven under, just three back in a tie for fifth.

Round 2 is in the books. #PGAChamp

A quick glimpse at the leaderboard before Round 3 starts on TNT & https://t.co/qShAOBYUSN. pic.twitter.com/gC1GmeNTj1