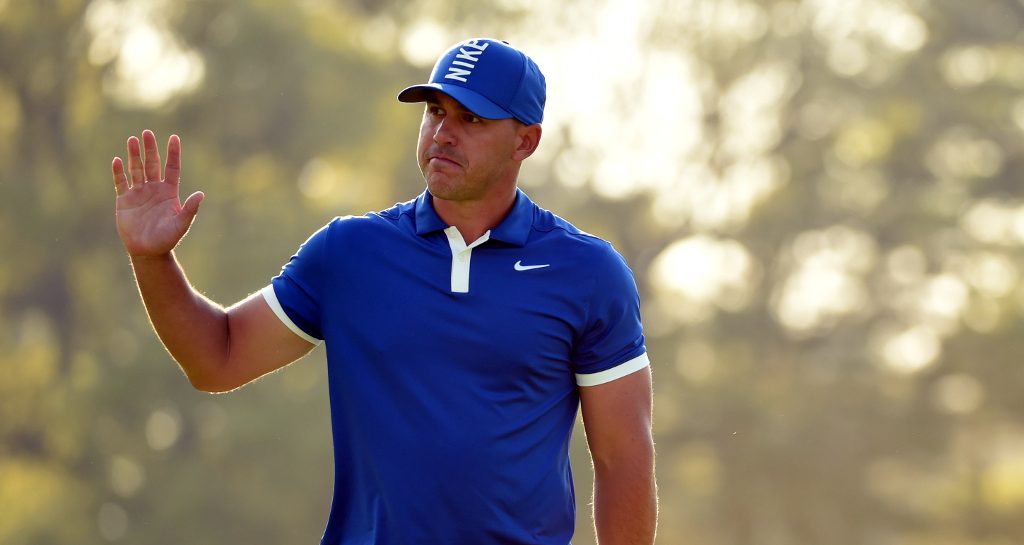 Defending champion Brooks Koepka is threatening to run away with the PGA Championship – if he hasn’t done so already.

The 29-year-old followed up his incredible first-round 63 with another high-class 65 to open up a whopping seven-shot lead over the rest of the field heading into the weekend.

Koepka appears to be on another level entirely than his rivals this week, and they seem powerless to stop him or even keep up the pace.

And while he dropped his first two strokes of the tournament at the challenging Bethpage Black layout on Friday, he also added seven more birdies to take his total to an incredible 12 under par.

That left him seven strokes clear of nearest rivals Jordan Spieth and Adam Scott, who find themselves way off the pace despite impressive rounds of 66 and 64 respectively.

It’s safe to say the PGA Championship is Koepka’s for the taking once again, and the only player who can realistically defeat Koepka at this stage, is Koepka himself.

Dear Mr. Koepka. Are you for real?

And if he hasn’t always gotten the recognition he deserves in the past for his impressive achievements, which included three major titles in the last two years, Koepka is almost demanding he get that recognition now.

Koepka was paired with Tiger Woods for the first two rounds, and it seemed more than a little significant that Tiger missed the cut with rounds 72 and 73, even as Koepka was smashing records.

Koepka was quick to dismiss any comparisons to the great Woods, however, saying he would need to win a whole lot more majors before that would be appropriate.

Ever the perfectionist, Koepka wasn’t happy with his two bogeys on the day.

“I didn’t strike it that good. But the way I hung in there today and battled it, I think was probably more impressive than (his 63), not having your A game but still being able to shoot a great score.”

Brooks Koepka has the largest 36-hole lead in PGA Championship history with a seven shot lead over the field. pic.twitter.com/KOmULKEDae

Koepka did get himself in trouble on a few occasions, but had the power to blast himself out of the rough.

And on his putting, he added: “I feel as comfortable as I’ve ever felt putting this week. I feel every time I even slide the putter right behind the ball it’s lined up perfectly.”

Koepka’s attitude to leading by seven also comes across as more than a little Tiger-esque.

“I’d like to see that lead grow as large as it possibly can,” he said. “I still have to go out there and do what I’m supposed to do, keep putting the ball in the right spot.

“Make sure you don’t make any double bogeys and I should have a good chance of winning the championship.”

Spieth and Scott both had great days to tie for second, but they’re like to need two more, and hope Koepka somehow loses his length, accuracy and touch.

Behind them, World No 1 Dustin Johnson shot a 67 to move to four under and share fourth place with England’s Matt Wallace (67), and fellow Americans Luke List (68), Kelly Kraft (65) and Daniel Berger (66).

Justin Rose shot a 67 to move to three under, good enough for solo ninth, nine shots behind Koepka.

New Zealander Danny Lee started the day one shot behind Koepka but finished it 10 back after following up his opening 64 with a 74.

Further down the field, Rory McIlroy managed to make the cut by one shot after a late birdie blitz, but rounds of 72 and 71 have left him 15 shots behind the leader.