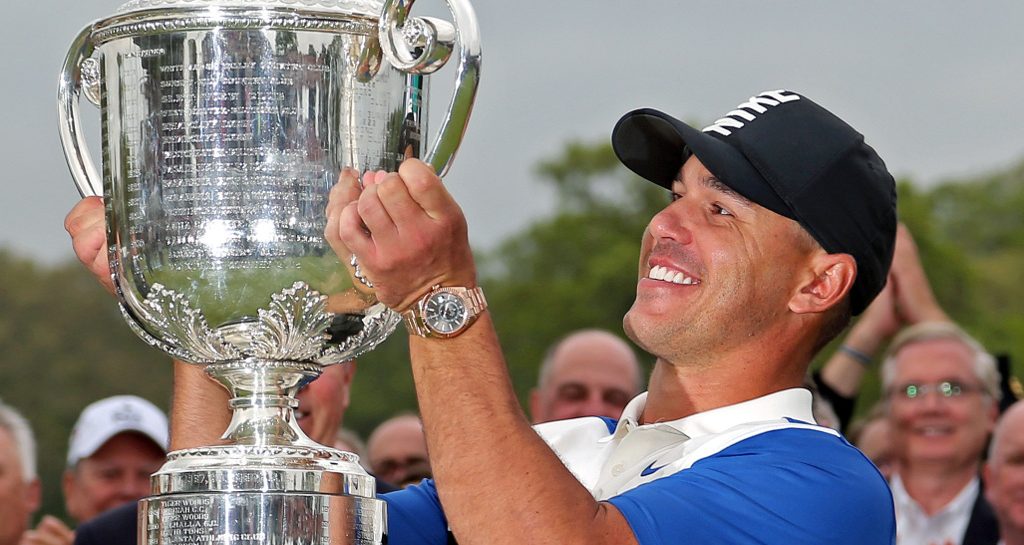 He nearly let it slip, but Brooks Koepka was able to shrug off a string of back-nine bogeys and successfully defend his PGA Championship title on Sunday.

After looking absolutely unbeatable for three straight days of competition at Bethpage Black, Koepka very nearly came unstuck in the final round as he racked up five bogeys to bring World No 1 Dustin Johnson into the picture.

But ultimately the 29-year-old American’s seven-stroke cushion was just too much to overcome for Johnson, and not even a near total collapse could prevent him from capturing his fourth major title.

Few could have predicted that Koepka’s seven-stroke lead would be cut down to a single shot, as Johnson so nearly managed to catch the runaway leader.

But the challenger was ultimately left to rue back-to-back bogeys of his own late on, as the brutal Bethpage layout had the final say.

Still, it was very nearly a disastrous end for Koepka, who bogeyed holes 11 through 14 and dropped another shot at 17, and found the crowd turning against him in favour of Johnson, as what had been a fairly boring championship suddenly turned very interesting indeed.

A birdie at the 15th saw Johnson close to within one shot, but bogeys at 16 and 17 ultimately let Koepka off the hook.

The eventual champion bogeyed the 17th as well but Johnson’s own stumble meant he still led by two heading to the final hole, where a closing par saw him sign for a four-over-par 74 and clinch the two-stroke win over Johnson, who had to settle for a one-under 69.

“I don’t want to say it’s a panic, but it’s definitely a shock when you make a couple,” Koepka said. “I wasn’t nervous. I was just in shock of what was going on — 13 was a bit disappointing and 14 was just a bit of a shock to go four in a row.

“I can’t tell you the last time I’ve made four bogeys in a row. I don’t know if I ever have. But just had to reset. I think everybody chanting, ‘DJ’ kind of helped that.”

Koepka says he didn’t blame the crowd, who started calling out ‘DJ’ whenever he made another mistake.

“It’s New York. What do you expect when you’re half-choking it away?” Koepka said. “I kind of deserved it.

“You’re going to rattle off four in a row and it looks like you’re going to lose it. I’ve been to sporting events in New York. I know how it goes.”

Koepka said the crowd ultimately helped motivate him by focusing him on the task at hand.

“I think it actually helped. It was at a perfect time because I was just thinking, ‘OK, all right. I’ve got everybody against me. Let’s go.’

“It helped me refocus and hit a good one down 15. That was probably the best thing that could have happened. It was very stressful, the last hour and a half of that round.

“You’ve got to right the ship eventually and try to stay mentally strong.”

When the dust finally settled, however, Koepka was the champion, with yet another major title under his belt.

You were great, New York.

“It has been incredibly quick. It has been so much fun these last two years,” he said. “To be standing here today with four majors, it’s mind-blowing.”

And despite his struggles, Koepka said he never thought he would lose.

“I was playing good. I just made mistakes at the wrong time. I challenge anybody to go play this golf course in 15-20-mph winds and see what they shoot,” he said.

“I never thought about failing. I was trying my butt off. “If I would have bogeyed all the way in, I still would have looked at it as I tried my hardest. Sometimes that’s all you’ve got.

“Even if I would have lost, I guess you could say choked it away. I tried my tail off just to even make par and kind of right the ship. But I never once thought about it.”

Behind the two-horse race for first, third place was shared by Jordan Spieth (71), Patrick Cantlay (71) and Matt Wallace (72) on two under, while Luke List grabbed sixth place a further shot back despite a closing 74, the only other player who managed to finish the tournament under par.

Sung Kang finished solo seventh on level par after a closing 72, while Rory McIlroy managed to finish a respectable tied-eighth after successive rounds of 69 on the weekend saw him finish on one over alongside the likes of Adam Scott, Shane Lowry and Matt Kuchar.