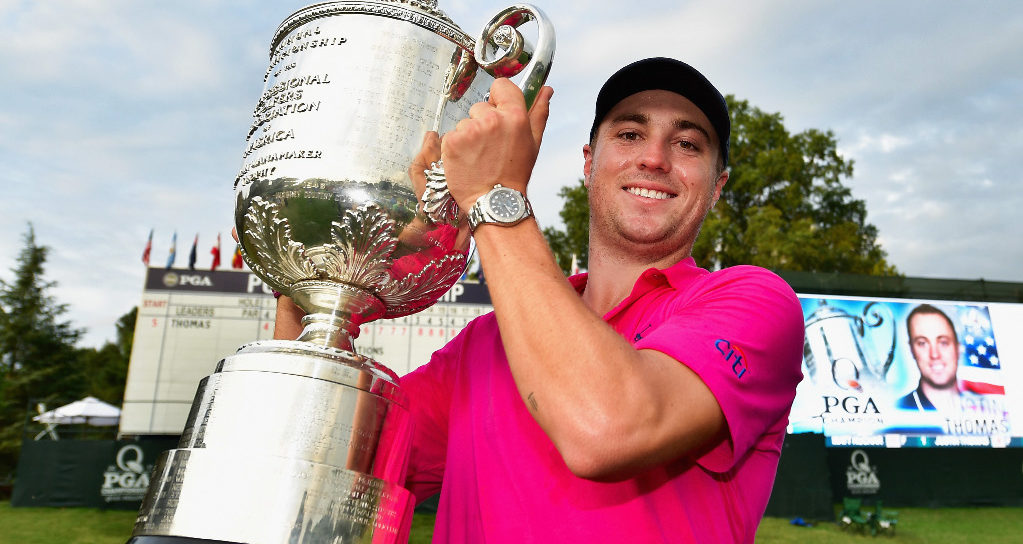 Justin Thomas claimed his first major title at Quail Hollow on Sunday, holding his nerve on the back nine to win the PGA Championship by two strokes.

The 24-year old Thomas was calm under pressure, firing a three-under par round of 68 that included a birdie at the 17th, to finish at eight under for the tournament, two shots ahead of Italy’s Francesco Molinari, South Africa’s Louis Oosthuizen and Patrick Reed.

It was Thomas’ third title of the year, following his back-to-back victories at the SBS Tournament of Champions and the Sony Open in January.

Molinari and Reed both shot rounds of 67 to climb up the leaderboard as others faltered on a tough final day. Oosthuizen carded a 71.

Overnight leader Kevin Kisner never really got going on Sunday, but was still in with a shout on the back nine until a bogey at 16 put paid to his hopes.

Needing an eagle on the tough 18th hole to tie with Thomas, Kisner instead fired his second shot into the stream, handing Thomas the victory. Kisner eventually made double bogey to finish in a tie for seventh place on four under.

Thomas was immediately congratulated by best friend Jordan Spieth, who had to settle for the next best thing, his best buddy winning, after his bid to become the youngest player to complete the career Grand Slam winner fell by the wayside.

Thomas’ playing partner, Japanese hope Hideki Matsuyama, enjoyed an up and down day with six bogeys and five birdies to finish alongside Rickie Fowler on five under as his dream of becoming Japan’s first ever major winner never materialised.

Fowler, who shot four under on the back nine, will be rueing the four shots he dropped along the infamous ‘Green Mile’ on Saturday evening as once again his chance of winning a debut major slipped by – though he and Thomas are also friends and Fowler was quick to congratulate him.