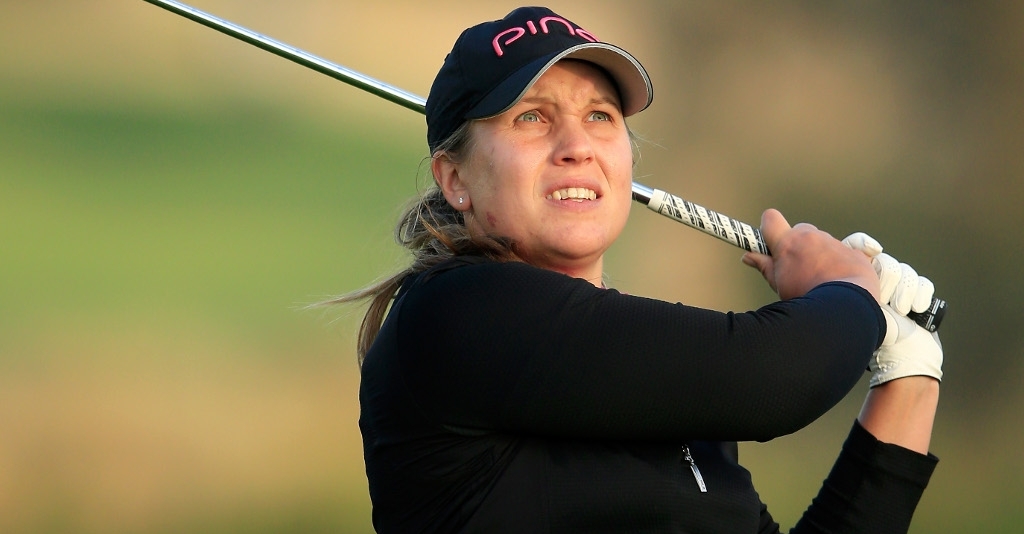 England’s Liz Young and Carmen Alonso of Spain share the lead after the opening round of the Omega Dubai Ladies Masters at Emirates Golf Club.

They shot a pair of six under par 66s in perfect conditions on the Majlis Course to end the day one stroke ahead of the defending champion Shanshan Feng from China. Dame Laura Davies and Elisa Serramia of Spain carded rounds of four under par 68 to lie a stroke further behind.

Young, who finished fifth in the event 12 months ago, is bidding for her first professional title after a string of top 10 finishes including another fifth place recently in India.

The 33-year-old from Hampshire, who plays out of Brokenhurst Manor Golf Club in the New Forest, opened with four straight birdies from the 10th and added another at the 18th. The long hitter had three more birdies and two bogeys on the front nine and said that she has been practising putting at home on a Huxley golf matt.

“I’m really pleased with today,” said Young, ranked 28th on the 2015 order of merit. “I’ve been practising the 12 foot putts and it’s just the feeling of the ball going in the hole, working on your stroke, because it’s been so windy and cold at home in England.

“Considering my tour average this year was 31, that was pretty good, 25 putts and 15 greens hit. I’ve been striking it well all year but haven’t been able to put the numbers together. I had a good finish in India a few weeks ago but I’ve been a bit disappointed with my season considering how good my swing’s got compared to last year.

“The start of every tournament, my goal is to win it. I know I’ve got to play good golf, and especially this tournament, there are a lot of good golfers playing here and higher ranked than me, but I feel that I can win.”

The 500,000 euro Omega Dubai Ladies Masters is the finale to the Ladies European Tour season. Co-leader Alonso is yet to make a cut from five tournaments played in 2015 but a strong finish would be the perfect end to a difficult year.

“I had my full card but this year has been tough because my mum had lung cancer,” explained Alonso, 31, from Valladolid, who nearly gave up playing golf two months ago.

“She had an operation in October and now everything is good. Sometimes you lose your happiness on the golf course. Since she’s recovered and I have a good team around me, I’m happy to play again. To be in Dubai, with the sunshine and shoot a 66 in the first round: happy,” she said.

World number six Feng carded five birdies in her bid to win the title for the third time, having triumphed in 2012 and 2014.

“I think my ball%u2011striking was pretty good, so I had a lot of birdie chances.  Made some and missed some.  But I still think 5%u2011under is a good score,” she said.

Davies had 27 putts in her 68 and was happy to be in contention for her 80th official tour title.