Woods and Mickelson sponsoring side-bets at ‘The Match’ 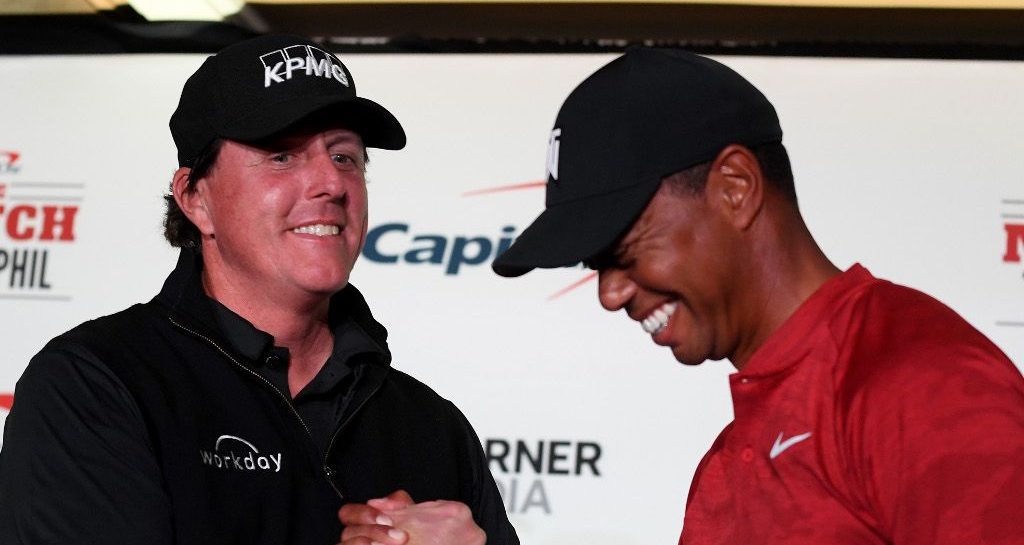 Tiger Woods and Phil Mickelson will be sponsoring a number of “side-challenges” to make things more interesting their $9m winner-takes-all showdown in Las Vegas.

The side-bets will come out of the players’ own pockets and will benefit various charitable causes, with Mickelson saying the decision was made to make the contest more of a spectacle for the viewers, who will be paying $20 to watch the event live.

Mickelson fired the opening salvo on Wednesday as he wagered $100,000 that he makes birdie at the first hole, a bet which Woods then called on him to double.

Woods and Mickelson, who will both wear microphones throughout the contest along with their caddies, are confident the event will help attract fans to the sport, while being quick to refute allegations the pay-per-view event was all about money.

“Hopefully, it will be received well by the viewers at home,” Mickelson said at a press conference in Las Vegas.

“It’s a glimpse into the future of sports. We’ll have live odds on screen so the viewers can place wagers, and they’ll be able to hear all of the banter.

“It’s a rare insight into our sport and I think people will want more of this in the future. If people don’t like it, then it’s probably going to be one-and done, but I think it will go down well.

“This event is designed to be a unique golfing experience for the viewer, with the insight, the drone coverage, the live on-screen gambling and the live microphones.

“It creates pressure for us, and an experience for the viewers at home that is totally unique. I think it will benefit the game, and we should attract sports viewers that we’ve never captured before in golf.”

Woods added: “It’s very different for golf. We’ll be able to showcase our sport in a different light, with the different technologies we will be using. It’s exciting for me and Phil and for viewers.”

For Woods, it’s also his first taste of competitive action since the Ryder Cup.

“After the Ryder Cup I shut it down for three or four weeks, and I spent time working on my body to get it stronger” he said.

“I got back practising, grinding and getting into golf again. I was looking forward to the break, but I missed competing and my competitive juices are now flowing again, for sure.”