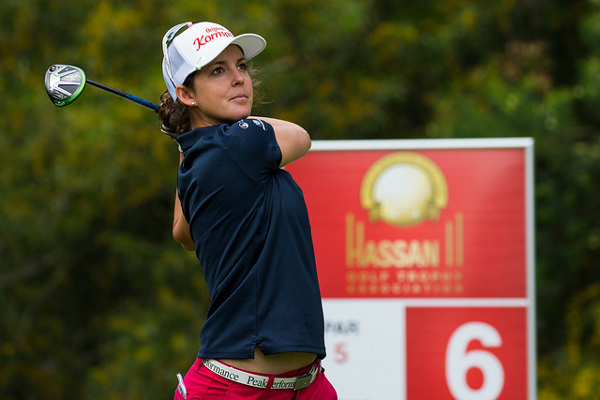 Christine Wolf and Laura Fuenfstueck claimed a share of the halfway lead on 3-under-par 141 after a day of blustery wind in the Lalla Meryem Cup at Royal Golf Dar Es Salam in Rabat.

Both players are winless on the Ladies European Tour, but have had success at a lower level.

Austria’s Wolf is in her fifth year on the main circuit, but did win the 2012 Crete Ladies Open on the Access Series. German rookie Fuenfstueck claimed her victory just two months ago in the Sunshine Tour’s South African Women’s Masters.

On Friday they were resolute as the high temperatures of earlier in the week dropped, replaced with an unpredictable wind that caused problems among the cork trees of the Blue Course (and caused as many difficulties over the road on the Red Course where the men are competing in the Trophee Hassan II).

“It was a bit gusty out there,” said Wolf. “At the start we were in between clubs but after a while we got used to it. Hitting into the wind you noticed it but because you’re in the trees, sometimes you don’t feel it on the tee as much and you just see your ball move.

“I love the greens here. I mean, you hit them where you see it and it just rolls there. If you miss it, it’s just because of a mis-read.”

Fuenfstueck was the model of consistency, parring her first 11 holes, then repairing the damage of a bogey at the third with birdies at the fifth and sixth holes.

Wolf has her mother on the bag this week and, in contrast, Fuenfstueck has an experienced caddie from El Jadida GC, Nabil Rashid. He was exceptionally proud of his charge for the week and revealed he is a trained scientist who credits his green-reading skills to his love of geometry.

The co-leaders head into the weekend one shot clear of Australia’s Sarah Kemp and three ahead of Sweden’s Lynn Carlsson and defending champion Klara Spilkova of the Czech Republic.

First round leader Nicole Garcia is in a tie for sixth on level-par. She struggled through her first nine (the back nine), dropping five shots, but made eight pars and a birdie coming home to keep her hopes alive.