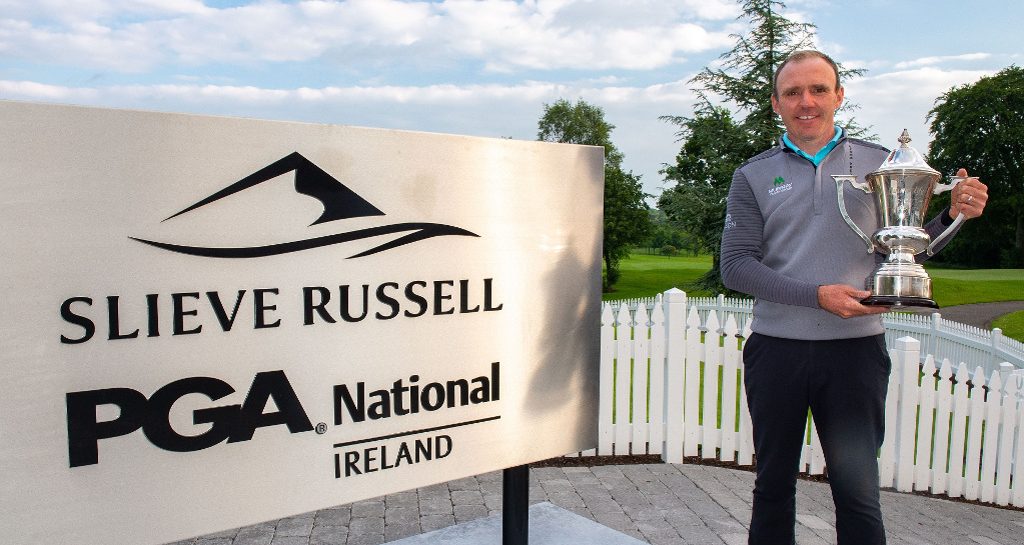 Colm Moriarty’s last-minute decision to take part in the 2019 Slieve Russell Masters Pro-Am paid full dividends as he romped to a comprehensive victory in the popular annual event – one of the highest-paid PGA pro-ams in Ireland.

Moriarty, from Glasson, County Westmeath, impressed from the start, returning rounds of 65 and 67 to finish the 36-hole tournament on 12-under-par, eight strokes clear of his nearest rivals Richard Kilpatrick, Michael McGeady and Simon Thornton.

The 40-year-old produced some of the best golf of his career on his way to victory as he went bogey-free over the two days on the Co. Cavan course – which was recently unveiled as PGA National Ireland, one of only eight PGA National-designated resorts in the world.

And his win was made all the more remarkable as he only arrived at Slieve Russell with minutes to spare before his opening round after taking the late decision to withdraw from Regional Open Qualifying at Baltray when play was suspended for bad weather.

“I was coming up the 18th at Baltray (on one-under-par) when we were called off the course because of thunder and lightning,” said Moriarty, whose victory earned him a cheque for €1,500.

“I had to hang around to see if play was going to restart but I knew it was going to take me an hour and 40 minutes to get to Slieve Russell so I had to make a call.

“I withdrew from the event, got in the car and arrived at the course with 20 minutes to spare. I hit a nice drive down the first, a nine iron into 12 feet and holed the putt to get me started.

“I played some very good golf, maybe right up there with some of the best golf I’ve played because it is a really tough course, a great test and one that improves every time we return.”

Damian Mooney, who was tied for the lead with Moriarty after the opening day, fell away in the second round but had the consolation of winning the team prize, combining with amateur partners Patrick Carville, James Connolly and Martin Daly to finish with a total of 183 points.

This year’s Slieve Russell Masters Pro-Am attracted one of the strongest line-ups in the history of the competition, with the likes of 1995 European Ryder Cup star Phillip Walton and ex-European Tour players competing for a total prize fund of €15,000.

Joining them at the sell-out event were a host of top names from the sporting world including former Ulster and Ireland rugby star Stephen Ferris, Cheltenham Gold Cup-winning jockey Robbie Power and Mick Fitzgerald, one of the most successful jump jockeys of all time who rode more than 1,300 winners during his career including winning the Grand National and Cheltenham Gold Cup.

Tony Walker, general manager of Slieve Russell Hotel, Golf & Country Club, said: “It’s a real privilege for us to be able to host one of the leading tournaments on the Irish golfing calendar.

“The event continues to go from strength to strength, with 52 teams taking part this year. Our warmest congratulations go to Colm, who produced some outstanding golf to claim a deserved victory, and we look forward to welcoming everybody back next year.”

Situated in the glorious setting of Ballyconnell in County Cavan, Slieve Russell is one of only a handful of facilities around the world to be endorsed by The PGA after being rebranded  as ‘PGA National Ireland’ in May.

The acclaimed 18-hole championship course has hosted numerous high-profile tournaments during its prestigious history including two European Tour events, and was home to the Irish PGA Championship in 1996. In addition, it is also the home club of up-and-coming Irish golfing stars Lisa and Leona Maguire.

Complementing the golf course is a 222-bedroom, four-star hotel; an award-winning Ciuin Spa; and an outstanding golf academy where resident head PGA professional Gordon Smyth and his team are available with expert tuition, state-of-the-art video analysis and training programmes to help golfers of all abilities achieve their goals.