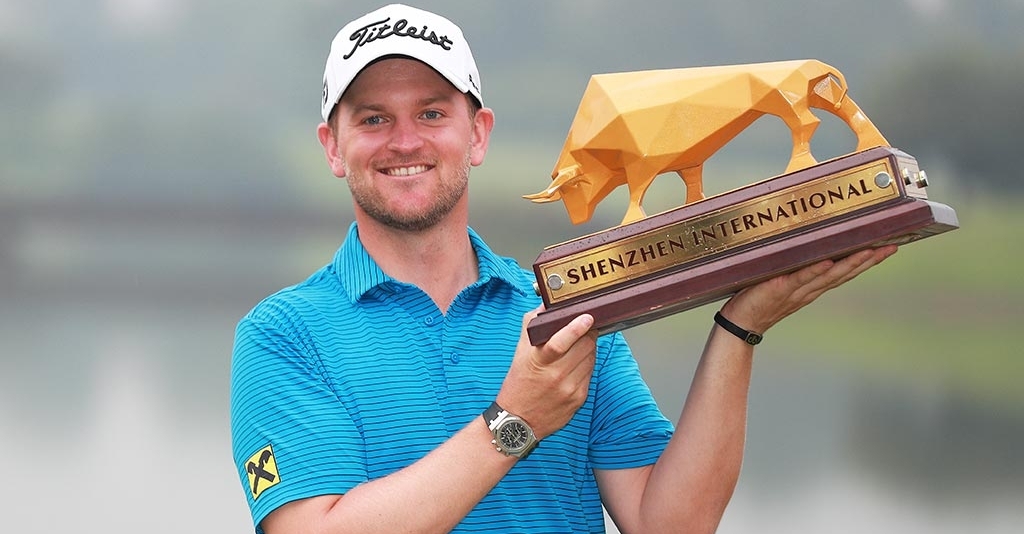 Austrian Bernd Wiesberger won the Shenzhen International title in a play-off when beating Tommy Fleetwood at Genzon Golf Club in China on Sunday.

Wiesberger started round four, three shots in front of South Africa’s Dylan Frittelli while Fleetwood started the day eight shots behind the Austrian.

Englishman Fleetwood scored a stunning nine-under-par 63 with birdies on the second, sixth and seventh, an eagle on the ninth, then further birdies on the 13th, 15th, 16th and 17th holes to finish his final round holding the clubhouse lead at 16 under.

The 31-year-old Wiesberger shot a final round, one under 71, with birdies on the third and seventh, his only bogey on the fifth while making two superb par-saving putts on the 12th and 17th to also finish at a 16 under total of 272.

The two started the play-off on the 18th with Wiesberger taking the more risky shot over the water ending up in the bank while Fleetwood played safely onto the fairway and then played his second into the middle of the green.

Wiesberger then showed his mettle by putting his approach to within five feet of the hole to then sink his birdie for the victory and the winner’s cheque of 437,017 Euros and his fourth career European Tour title win.

In an interview after his victory, the Austrian said he was relieved but happy with his victory.

“I’m feeling a bit relieved now I have to say,” said Wiesberger. “I’ve had a stretch of really good events the last couple of months and it’s really nice to have a trophy again.

“We have really good players out here, all up for it, playing well and throwing a lot at me. At the end of the day, I’m just glad I got myself into the spot where I could play for the title.

“Tommy has had a great day today and I’m just grateful to make that one shot when I needed to.

“I just wanted to get off to a good start and show them that I’m up for it and I did, scrapped around a little bit, had a couple of near misses with good looks at it early on. It could have gotten to me but I stayed calm, played on decently.”

Next in third, tied at 15 under, was Englishman Ross Fisher and Frenchman Grégory Bourdy and a shot back on 14 under were Paraguay’s Fabrizio Zanotti, South African Dylan Frittelli and American David Lipsky.

A shot further back at 13 under was the group of Thorbjørn Olesen of Denmark, Frenchman Alexander Levy and Thailand’s Thongchai Jaidee while one back were South African George Coetzee, China’s Lui Yan-Wei and Spain’s Pablo Larrazábal.