Wie leads Women’s British Open after round one 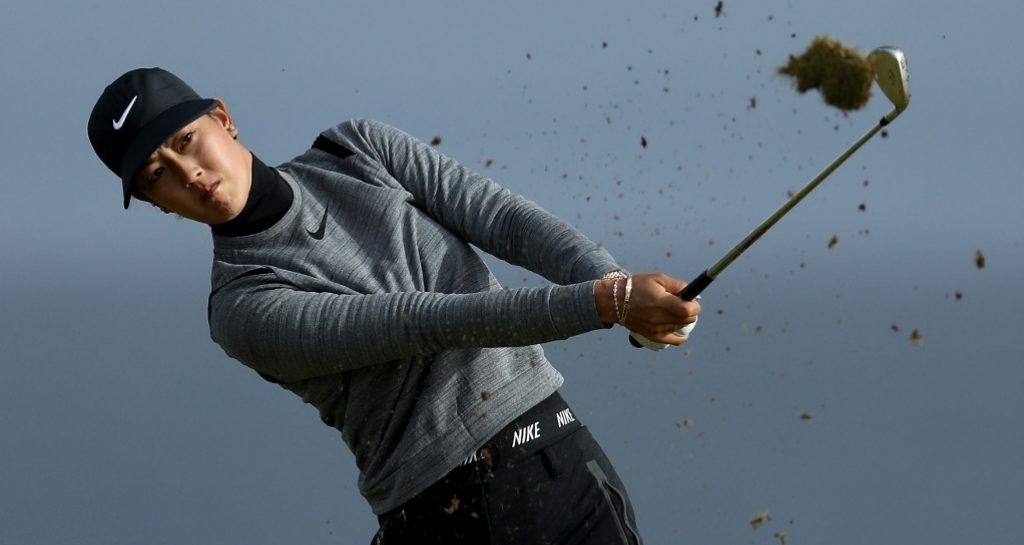 Michelle Wie shot a women’s course record eight-under-par 64 in fair conditions at Kingsbarns Golf Links on Thursday morning to take a one stroke lead at the Ricoh Women’s British Open.

Wie, who is looking to make her fifth Solheim Cup appearance for the United States team in Des Moines, Iowa, later this month, is a stroke ahead of South Korean In-Kyung Kim, who won the Marathon Classic on the LPGA Tour a fortnight ago, with Lindy Duncan from the United States a stroke further behind in third position.

.@themichellewie‘s 8-under 64 included 6 birdies on the back nine.

Solheim Cup Captain Annika Sorenstam had reason to be cheerful when she arrived in Scotland on Thursday afternoon, with seven Europeans in the top 15 places.

The Britons were especially inspired, with English pair Mel Reid and Jodi Ewart Shadoff tied for fourth place on five-under-par, alongside Anne Van Dam from the Netherlands, Chella Choi of South Korea and Lexi Thompson of the United States.

Dame Laura Davies, who qualified for her 37th consecutive appearance in the championship on Monday, was in vintage form as she shot a 68 for a share of ninth position with compatriots Charley Hull and Georgia Hall, Swede Anna Nordqvist and American trio Ally McDonald, Morgan Pressel and Jaye Marie Green.

Davies had been six-under through 14 holes before the first of two weather delays, due to the threat of lightning, but after a torrential downpour and a one-hour suspension, she double bogeyed the 15th and then dropped another shot at the 16th only to birdie the 18th hole.

Hall, the European Solheim Cup rankings leader, also had to deal with the weather delay. She was bogey-free with four birdies on the front nine, at the third, fifth, eighth and ninth holes. She is looking to carry her strong form across from last week’s Aberdeen Asset Management Ladies Scottish Open, where she tied for ninth place in challenging conditions.

Her first round felt like a breeze by comparison and she said: “It felt like no wind to me. Last week was a four-club wind every day. I don’t mind the wind, but it does make things easier when there’s not as much.

“I love links golf, and it was good to play well today. I played really steady. I hit every fairway, so that kind of made things a little bit easier for me.”

Hull made three birdies on the front nine and eagled the long 11th, hitting a rescue club from 250 yards up to six feet from the flag. She made another gain on the 15th to reach six-under-par, but dropped shots on 16 and 17. “I was pretty happy about my round. Shame about the three-putt on 17 and 16, but I actually hit good shots into the greens there, just three-putted as the greens were a bit slow because the rain came in,” she said.

Meanwhile, Reid, who claimed her sixth LET title at the Vic Open earlier this year, took advantage of the ideal conditions with seven birdies early in the day.

“You’re not going to get Kingsbarns much tamer than that, so it was important to take advantage of that this morning,” she said. “I’ve hit one bad putt all day, which was on 16, I just looked up a little early, which I tend to do. But yeah, I felt me and Kev have done a lot of good work the last few days, and I’ve felt like I’ve been striking it really well and been rolling my putts well.”

There was no doubt that Wie, known as “The Big Wiesy,” lived up to her star billing on the first day, with nine birdies and just one dropped shot on her card.

The 2014 US Women’s Open champion said afterwards: “It was a lot of fun! It was absolutely gorgeous today. I think Kingsbarns is definitely one of the most scenic golf courses I’ve ever played.”

Her previous best finish in the Ricoh Women’s British Open was when she tied for third at Royal Birkdale as an amateur aged 15 and she was determined to gain some links experience ahead of this Major championship week. “I made it a point to come to the Aberdeen Asset Management Ladies Scottish Open last week and I really feel like that helped me a lot, because it’s so different,” she said.

A winner of four LPGA titles from 2009-2014, the 27-year-old from Honolulu has suffered a series of injuries over the last two years and hurt her neck during the final round of the KPMG Championship a month ago, but hinted that she is now injury free, “knock-on-wood.”

When asked why she had opted for the higher lofted woods, she quipped: “I think it’s just getting old!” but she also added that she hopes her best years are ahead.