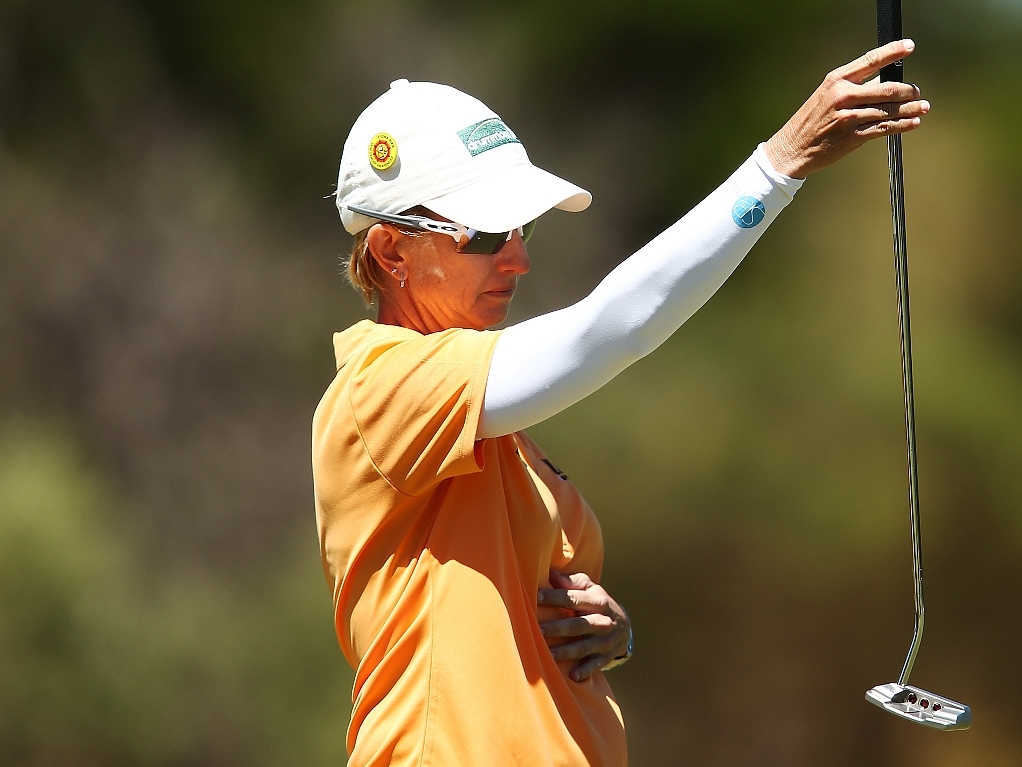 Karrie Webb is positioned to launch at a sixth national championship after a blanket finish to the third round of the ISPS Handa Women's Australian Open at The Grange.

Webb teetered on the edge of disaster when her chip to the par-four 18th hole shot past the cup, but summoning the competitive drive that has characterised her 20-year career at the top of the women's game, she rolled in the putt to save par to remain eight under.

In the ABC television commentary box beside the 18th green, world No.1 Lydia Ko cheered the long putt home as the 41-year-old Webb fist-pumped. "That's why she's a legend,'' said Ko, who is also just a shot back from the lead going into the final round.

Webb later suggested it was a "huge momentum putt going into tomorrow''.

There are three leaders of the Open through 54 holes – Jenny Shin (70) of South Korea, Japan's Haru Nomura (70) and American Danielle Kang (67) – at nine under. Webb (70) and Ko (68) are tied fourth one back, while there are 18 players within four shots on a packed leaderboard.

Webb isn’t the only Aussie in the hunt, with Victorian Stacey Keating at six under after her third consecutive round of 70. Perth’s Minjee Lee shared the day’s best round of 67 to charge back up to four under, but a double-bogey on the 16th likely cost her a shot at the title.

But most Aussie eyes will fall on Webb, who said her experience could be a factor.

"I’m not sure my name means the same on a leaderboard as perhaps it did a little while ago, but I think most people respect the fact that I know how to win, and that if I’m up there with a few holes to go I probably might have a good crack at it,'' she said.

Nerves will play a part though, which she acknowledged.

"If I wasn’t nervous about having a chance to win a golf tournament, let alone the Australian Open, then I probably shouldn’t be sitting in this chair, so it’s like an excited nervous I guess.

“It’s been quite a while since I gave myself a chance to win on Sunday and a legitimate chance, so you know I’m looking forward to the opportunity.''

The field condensed today because the overnight leaders — Scotland's Catriona Matthew and England's Holly Clyburn — both gave back shots to par. Veteran Matthew struggled to a 73 but was consoled by the fact she had "not played myself out of it''. Clyburn imploded with a 78 and is out of contention.

This left a host of players to push through to the lead, first Jenny Shin, the American-based Korean seeking her first LPGA Tour win and then Ko, the relentless Kiwi who birdied the first four holes and threatened to take over the tournament. Shin, 23, an LPGA regular who has lived in the US since her youth, bogeyed the last hole with a three-putt or she would have been the outright leader.

Ko had a 68 and was pleased to find a score in the 60s for the first time at The Grange. "It's going to be fun, I'll try to enjoy it, obviously in the final groups there might be a bit more tension, but I'm going to try and enjoy it,'' she said. "All the girls are lovely; it's not like there's going to be sparks going on!''

Nomura, the 23-year-old Japanese player, birdied the last to get herself into the final group tomorrow.